As I had no pressing obligations on Thursday, 5th March 2009, I decided to join a friend on a day trip to Carey Island, Selangor. The historical town of Jugra was later added to our itinerary. We had an enjoyable excursion despite the wet and chilly weather. 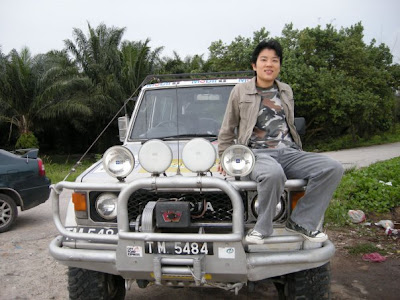 Taking five at a coastal road in Carey Island, Selangor, a plantation island that is better known for the indigenous community that lives there, the Mah Meri. 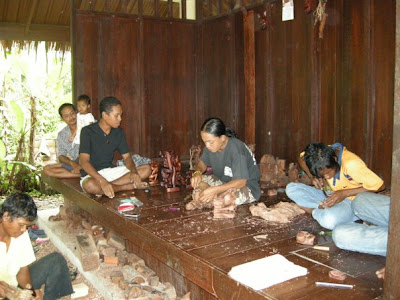 Young Mah Meri artisans at their workshop in Kampung Sungai Bumbun. Thanks to the efforts of UNESCO, UNDP and the Centre for Orang Asli Concerns, the Mah Meri culture is preserved and passed on to the younger generations. 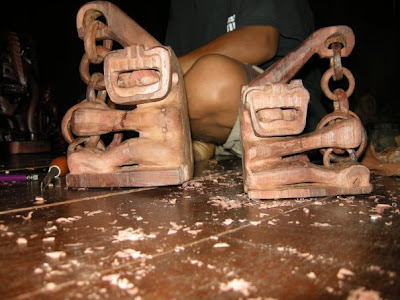 Mah Meri woodcarvings, representing ‘moyang’ or deities/spirits (of plants, animals, and natural phenomena – they have a ‘Tornado Spirit’, a ‘Rice Spirit’, a ‘Shellfish Spirit’ and so on) are carved from a fast-disappearing hardwood known as Nyireh Batu. The carvings are of such high quality that they have been accorded the UNESCO Seal of Excellence. Each carving is made from a solid block of wood. The links in the chain these ‘spirits’ are holding are formed by chipping away at loops marked in the wood until the links separate into rings. 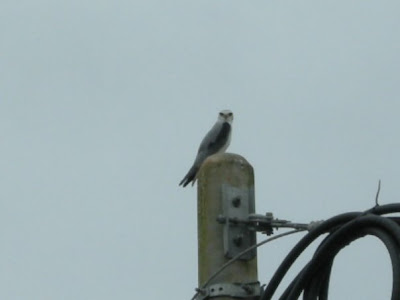 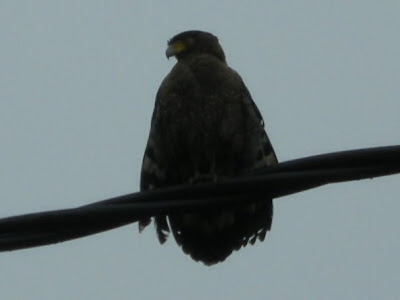 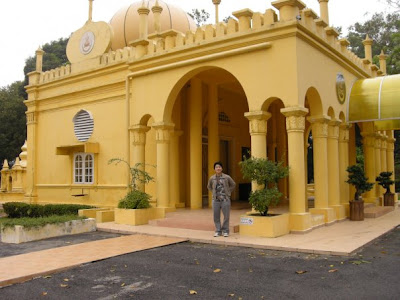 The Royal Mausoleum in Jugra, situated in the Royal Town of Klang, Selangor, is the final resting place of Sultan Abdul Samad. Jake has written a fine feature story on Jugra, and you can read all about it here: Historical and Scenic Jugra 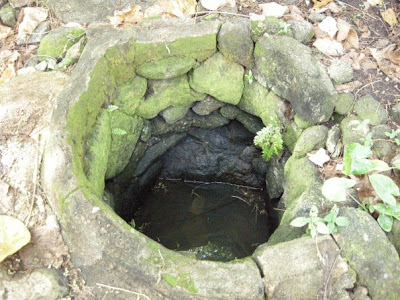 I trespassed an archaeological excavation site to have a closer look at this ancient well, which is estimated to be at least several hundred years old. 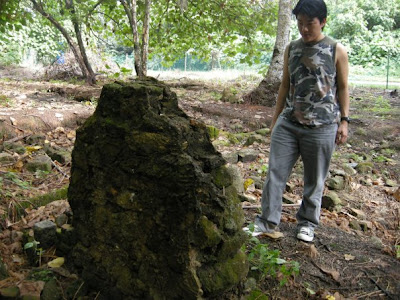 Checking out a bit of an ancient wall that remained standing within the fenced-in archaeological excavation site. 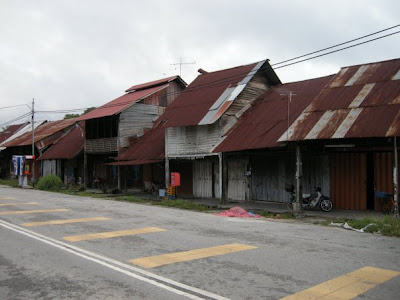 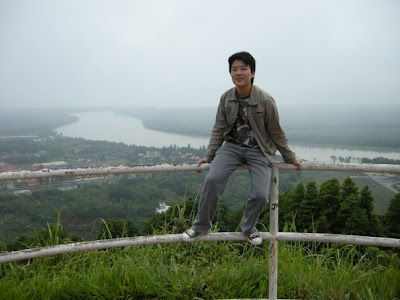 At a paragliding site at Jugra Hill, waiting for the paragliding operator to arrive. Unfortunately, the outfit is open only on weekends or by reservation. 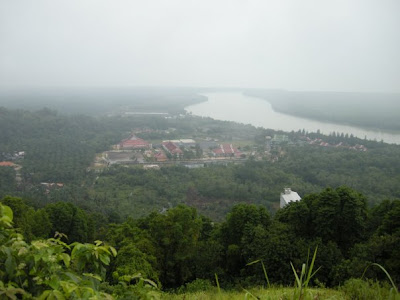 A great view of Klang town from the top of Jugra Hill. You can see the sea from here. It was a wet, foggy day. 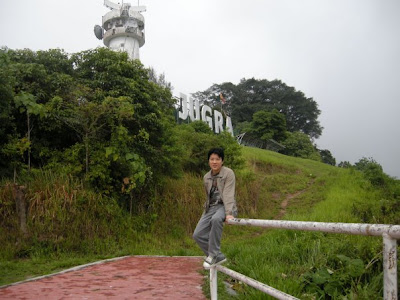 The lighthouse at the top of Jugra Hill is now managed by the Maritime Department of Peninsular Malaysia. 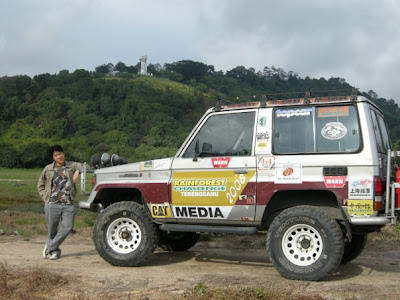 At a small airfield about 2 km away from the foot of Jugra Hill. If I had the opportunity to do some gliding that day, this would have been the field where I was supposed to land.
Posted by ~CovertOperations78~ at 11:28

An excellent post, E. We have such beautiful and interesting things and places here, don't we? No need to traipse all over the world searching for excitement.

Wish I'd been with you!

I must get my Fisherman to leave aside his rods for a bit and let us go about discovering more in our own backyard!

Ee Lynn,
Very interesting. Initially I thought you were sailing The Jugra Yacht belonging to HRH the Sultan of Selangor.

Thank you for your kind comments, dear Pat and Abang Zawi!

Re Pat: I shall ask you to join me on my next day trip or nature excursion! Our two fishermen can go off together, poles, reels and all! In fact, they won't even have to exchange more than 8 words with each other, ha ha! "Pleased to meet you" and "Let's try that spot" would suffice!

Re Abang Zawi: Sailing on a yacht? Too bourgeois for someone like me, Bang! I naik rakit atau sampan je, hee hee.

The pics of the birds are great!!

I have been encountering these Brahmini Kites more often after coming here to Labuan. There is one which surveilles our backyard which is actually a little mangrove-banked river. Then just last week, I had a great thrill, whilst flying back to Labuan from Tawau at 200 feet. I overtook one at my foot-window level. Neither of us saw each other until I was just about to pass him, the gorgeous fellow, and what a rapid dive he could take! Tawau, of course, being a seaside town with acres of mangrove and marsh, is a great place for them. My pure admiration to these birds, whose beauty and grace in the skies signify their stewardship of the swamps. They can eat their quarry in flight, so mid air refuelling is not a Yank heritage bequeathed to the world.

Thanks. Those photographs are beautiful, and a reminder that we are feeble imitators of these masters, and thereby poor in our flattery of their aerial prowess.

By the way, Jugra is the RMAF Regiment (Special Forces) HQ.

Re Major Jeffrey: Thanks for your comment! Yes, I did notice that the Jugra Hill Lighthouse area is now restricted territory and we can't enter it because it is under the Skuadron Sayap Tempur. I got very excited when Soldier Man told me that it means they are Commandos!!!!! Too bad I couldn't get to see them in action!

As for Brahminy Kites, they are smart birds that have adapted well to the urban environment. The funny thing is, according to my pocket guide, the Brahminy Kite has its origins in Sumatera but is now endangered in Indonesia, but very common in the Klang Valley and Singapore! Should they add Tawau and Labuan to the list?

I've spotted these beauties in Butterworth, Kinrara base quarters, Labuan and Tawau. Should 'they' include Tawau and Labuan? Well, I believe that if you have spotted one or a pair, that might be as good as it gets considering their territorial nature. I do not believe that they are in any way localised to the Valley or Singapore, but they are spotted where you may be fortunate enough to see them. Yes, they looked common to me in Tawau, but that may be because I covered an hour's radius in the Nuri. Go anywhere coastal; in fact, I have seen them in Kuala Selangor and even Jugra while doing some PASKHAU course closure ceremonial abseiling/roping sorties. Enjoy them where you may. That in itself is such a privilege.

Fantastic bird pics - so glad to see they're still about. So next time paragliding????

Hi. Syafique here. I am a writer for a magazine and I am researching on Carey Island. Thks for the wonderful info you have here. A great help!