My month of unstructured activity and unfettered freedom had been a most satisfactory one. I have had the opportunity to catch up on social commitments and had more time for rest and reflection than I ever had since I graduated ten years ago. I, who have never been not gainfully employed from the day after I completed my final exams, had found my unscheduled break from the workforce to be a blessing in disguise. I started my new job today, as a litigation associate in a big corporate firm, and I re-enter legal practice with greater ambitions than ever of productivity, success, job satisfaction and progress.

Drove over to Alicia’s condominium of a Saturday evening after having spent half of Friday and a good part of Saturday at the parental home, tending to Amber and Chocky’s needs and cleaning the parental home and garden. Alicia had invited about 20 of us over to her lovely home for an evening of good food and music. I brought her a bottle of red wine, remembering how she loves anything red, not least wine. It was fabulous to see Lynette and Alicia and their dear Mum again.

Halfway through my plateful of sushi and salad, Alicia announced that it was time for a musical interlude. She sang ‘La Ci Darem’, from Mozart’s “Don Giovanni” with her music teacher with such feeling and haunting beauty that we were mesmerised. This was followed by a solo, Gluck’s ‘Che Faro Senza Euridice’ (Microsoft Word keeps trying to ‘correct’ my spelling as ‘Eurydice’ – well, this is Italian, not UK English!), Schumman’s ‘Du Ring Ai Meinem Finger’ (my favourite: it’s simply exquisite!), Brahms’ ‘Wiegenlied’ (we all joined in this one) and a selection of songs in English, ‘Let’s Do It, Let’s Fall In Love’, and Chaplin’s ‘Smile’. One of Alicia’s sisters accompanied on piano for some of the songs. They really are a highly gifted bunch, and I was happy to see their mother beaming with pride as her daughters performed with confidence, class and aplomb.

Dessert was served after the music and we chatted heartily over cake, fruit, cheese, crackers and coffee. I was mindful to let Alicia know unequivocally what a privilege it had been for me to be among such talented friends, and how much I enjoyed their company.

Sunday, 8th March 2009: A Jaunt Down History Lane in Melaka.

One of my friend's differently-abled friend from the People’s Republic of China, Hawk, was in Malaysia for a week to attend to some business concerns, and through a friend who acted as an interpreter, had informed my friend that he would like to visit Melaka. I was invited along to act as an interpreter, and I was happy to be of service. I was able to provide Hawk with a lively and often mildly scandalous commentary on Malaysian history, the significance of Melaka, and Malaysian current affairs in my rather dubious Mandarin. 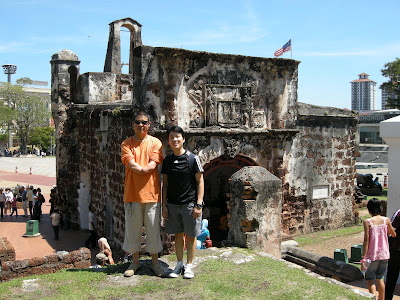 Hawk and I posing at the back of Fort A Famosa, constructed by the Portuguese in 1511. I informed Hawk in my dodgy Mandarin that the Dutch broke off part of the Fort, and the British wanted to break it too, but Stamford Raffles stopped them because he thought it was too pretty to be smashed up.

Hawk is born with deformed arms but is a successful businessman running a tour outfit in Kunming and commands a fleet of over 20 offroad vehicles. He can use chopsticks, operate a digital camera, drive a standard transmission vehicle and do pretty much everything on his own. I think he is awesome! 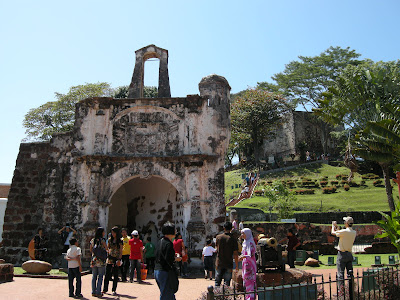 A view of Fort A Famosa and St. Paul’s Church, which I am sure isn’t the original name for it. The Church was constructed by the Portuguese, but the Dutch later used it to bury their dead. It’s like being a cuckoo, only in reverse -- you drop off your dead instead of lay your eggs in someone else's nest. 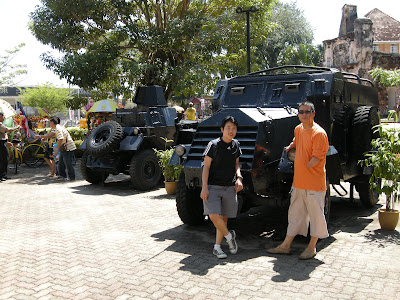 Hawk and I checking out the Royal Malaysian Police’s decommissioned armoured vehicles (used in the 1940s and 50s) at the town square. 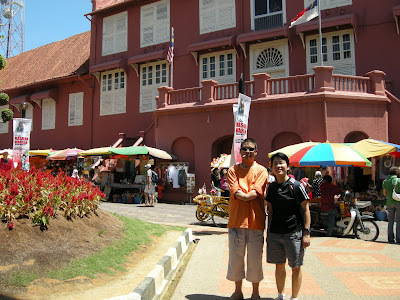 Enjoying an after-lunch walk in front of the Stadhuys, constructed by the Dutch in 1641. Hawk wasn’t terribly impressed with its age – apparently a building constructed in the 1600s is small potatoes in China. 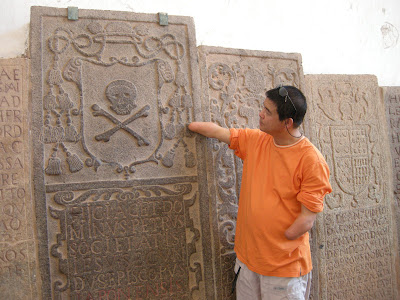 Hawk wanted to know what the skull and crossbones on this tombstone in St. Paul’s Church means. Sorry, buddy, but I don’t read Dutch either. It probably has nothing to do with pirates, though.

We did have a good lunch and dinner in Melaka, though, and I had enjoyed visiting the places of interest again. We would unanimously like to see better preservation of heritage buildings and better management of tourist spots in Malaysia to prevent things from degenerating to the point of tackiness.

It has been a very busy ‘final week of freedom’ for me, what with the upcoming Raptor Watch Weekend and all. I had gone back to the parental home at least 2 days a week to spring clean the house, keep the parents company and tend to the dogs.

I went over to my new workplace on Tuesday morning to sign my letter of offer and speak to the Office Manager about things like a parking space and my Bar Council Practice Cert.

After saying goodbye to my friends Clement and Mun Yee who work there, I left the office and made my way to the SPCA. I went up to the Bungalow to change into my ‘grunt work’ clothes and to visit the 5 new puppies who were being fostered at the Bungalow until they could be safely vaccinated and put up for adoption.

My dear friend Cindy, who lives close by, dropped by with some books for my team to sell at the Green Living booth during the Raptor Watch Weekend to raise funds for our environmental education projects.

It was a quiet day at the SPCA animal shelter, as it was a weekday. Thean asked me into the Surgery to see an adorable black puppy that had just been vaccinated. Her name was Bee Gee (for ‘Beautiful Girl’) and she was a roly-poly playful little thing with a tendency to squeal with alarm as soon as she realised we were going to put her back in her enclosure and leave.

It was fine weather for washing dogs and I washed a number from the Maternity Kennels, as there were new arrivals that may not have been given a tick wash yet. When the weather turned cooler, I put the dog-washing things and Tactik EC away and started cleaning the Shelter.

I swabbed the Front Reception/Admin area, Puppy Areas, Cattery, Maternity Kennels and Food Preparation Area with biodegradable soap and disinfectant and scrubbed the grubbier areas with a hard broom. A young female groomer had been helping out at the Shelter for the day and offered to help me wash the floors. We hit it off instantly and chatted companionably as we went about making the Shelter clean and healthy for our animal friends.

Muniandy, Thean, Joanne (the groomer) and I went to the warong for tea after completing our duties for the day. Tea and cakes was my treat. As each of them left for their respective homes after tea, I went up to the Bungalow to shower and change. Glyn and Nicole were hard at work mopping the Bungalow stairs (one of the dogs had probably decided it was a good idea to pee on the staircase). We chatted about work, the Shelter, euthanasia procedures, the WSPA (World Society for the Protection of Animals) accreditation and our social lives over dinner at Studio 5.

I went back to the BOQ late in the evening to attend to the cats and the housework, and to make new signage for the Green Living booth. It has been another productive day. 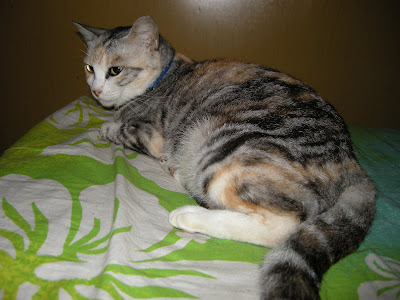 Kitty making sure we know who owns the bed.
Posted by ~CovertOperations78~ at 22:24

Those pix of Melaka remind me of how hot it was everytime I've been there. The last time, with Larnee's William in tow, playing tour-guide, just like you did!

That's a lovery kitty-cat! A tri-coloured girl - Chuan's favourite. He loves cats, but we can't have them because I am terribly allergic to them. Poor man. He's stuck with out doxies and ze cheeky bulldog!

Re Pat: So good to see you and Chuan again at Raptor Watch! Thank you for coming! The birds arrived an hour after you had left --- flew very low, poor things must have been exhausted!

Looks like you guys had wicked time there. Comraderie wins the day!