"Give Peace A Chance"

The January 7 arson attacks on four churches in the Klang Valley have unleashed the best and the worst in Malaysians.

While the mainstream media has been exercising restraint in their reporting of the incidents, not all bloggers have demonstrated the same level of mindfulness. Some of the bloggers I have previously followed expressed such prejudice, hatred and suspicion in their opinions that I have decided that they are not people I wish to retain as my friends. Others made unfounded and preposterous allegations of the arson attacks being political manoeuvres by either party, depending on which side you are on. The more erudite bloggers have been holding forth endlessly on how the random acts of violence are the results of years of corruption, reverse discrimination, marginalisation of certain groups and the undermining of the independence of the judiciary and the doctrine of separation of powers.

What I do know, however, is that is it now truly a battle between "us" and "them".

"Us" constitutes those of us who are not merely paying lip service to the ideas of peace and tolerance, but who actively reach out to others in a spirit of friendship, compassion and conciliation. "Us" is those of us who believe that a fundamental way of battling corruption is by living our lives with integrity -- by not offering or accepting bribes; by not "pulling strings" and relying on "connections" to secure jobs, contracts, titles and places in favoured institutions; by not transgressing housing and public order regulations and then expecting the authorities to "close one eye"; by not purchasing illegal and pirated goods or patronising illegal outlets; by not creating opportunities for dishonesty and corruption. "Us" is those of us who believe that the way to lasting and peaceful change is through democratic means and through public education efforts, and that the only way to counter bad ideas is through better ideas, and not through censorship, the suppression of civil liberties or exploiting the ignorance of certain groups.

I urge all of you, gentle readers, not to respond in fear and suspicion, but to pause to reflect instead, on how the arson attacks have also brought out the best in Malaysians.

Consider the goodwill gesture of a group of Malaysians of different faiths and backgrounds who responded to an appeal on Facebook and came together at Bukit Bintang to hand out flowers to passersby in a gesture of goodwill and friendship. I may not be entirely convinced that "everything's going to be alright", but I do know that with individuals such as Chi Too and his friends who courageously turned up at Bukit Bintang, there is immense hope that our country will rise above its failings and shortcomings to be united, strong, progressive and resilient. 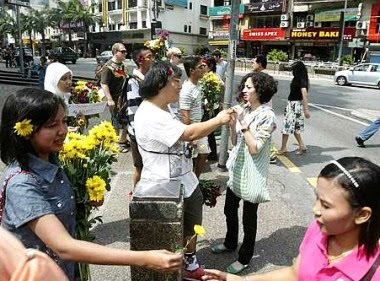 Youths giving away flowers as a sign of friendship and unity at a busy intersection at Jalan Bukit Bintang yesterday in the wake of arson attacks on four churches on Friday. — M. AZHAR ARIF / The Star

Photo and caption reproduced from The Star, without permission but in accordance with the principles of fair use.

And today, 130 Muslim NGOs volunteered to help protect churches by patrolling and checking on churches in their neighbourhoods and reporting on suspicious activities in a gesture of goodwill.

These sincere gestures touch our hearts precisely because they are so rare that they have become newsworthy.

Our duty today and henceforth is to make an earnest effort to ensure that goodwill gestures such as these will no longer be exceptional or isolated.

I foresee the attacks are not going to stop immediately. But if we were to react with fear and hatred, we would be letting "Them" win. Our duty therefore is to respond with courage and goodwill, as the groups above have.

The only way we can make our nation strong is by extending a hand in friendship, compassion and trust to others. Don't just sit there complaining that the investors have lost confidence in Malaysia -- play your part by living your life with integrity and reducing opportunities for corruption and illegal activities! Don't whinge about how Malaysian society is no longer what it used to be -- say hello and introduce yourself to a neighbour, a new colleague, the postman or waste collectors, the stranger who happens to share your dinner table at an event! (P/S: Thank you, Mum and Dad!) Be diligent at work, but also take the time to volunteer your time and skills and contribute your resources to worthy causes, because sharing is a privilege and a pleasure.

The groups above have taken a step towards creating a better and more peaceful Malaysia for all. Let us make it our New Year resolution to follow their lead and make peace, stability and unity our responsibility. For we are One, and we are strong, and we are better than those who try to stoke the fires of hatred. And we shall overcome, but only if we all play our part.
Posted by ~CovertOperations78~ at 12:46

CO78,
Sadly at the moment, being one of "Them" is more favourable than becoming one of "Us". I'm hazarding the MO being applied is: run down, create anarchy till the country falls on its knees. Then what? For "Them" to triumph and re-build what they had purposely damaged? Aaargh.... a cat can't be thinking such thoughts. When I said I'm not taking sides, I was told that: it's fine for you, you're not living here. Yeah, so just because I'm 7,000km away, doesn't mean I don't care. How I wish the witches had just turned everyone into cats. It's less complicated in the feline world. purrr....meow!

You know, Lynn, I tried placing some comments in that blog you mentioned and it was not published. The prime attitude here is of one to exhort but not to listen. The fearsome thing is, she does represent an alarmingly substantial slice of society. I am surrounded by them, as you know.
However, it will be up to the discerning to disinfect our nation of this scourge. We are too intertwined to take sides, or kin will be rent from kin, and both extremism and supremacy know no brotherhood outside their self aggrandised fold.
In the midst of much evil, also grows much grace.

Dear Kitties-in-Sydney,
You hold some pretty subversive thoughts for a cat. Am glad you don't rule the country. Rebuild? From what? What's there left of the Planet? What's there left to mine, smelt, harvest, chop down and exploit? What have you got left?

We have already established that the said person is not sane. And we have also established that half the country isn't sane, either. Are we just going to sit down and let them rant and stir up hatred and fear and anger, or just wait it out for the storm to die out, or are we going to be proactive like the groups above have, and do something constructive?

We can't fight fire with fire. Last night, while I was driving around Bangsar, a motorcyclist merged into my lane and clipped my car. For some reason, he was angry and thumped my car with his fist, even though he was clearly in the wrong. Had I honked, or flashed my headlights, or yelled at him, it would have made him madder, angrier and more self-righteous. And 10 other motorcyclists would have stopped their bikes and gotten ready to beat me into pulp. After all, racial sentiments are pretty strong right now, and things are going to come to a head sooner or later in this country. Instead, I swallowed my pride, wound down my window just a little, said "Minta Maaf" and waved him through. He looked surprised, and no longer angry.

And that is similar to what Chi Too and his friends did with the flowers.

I believe that if we look deep in our heart, we would be able to see that there is no Us or Them...afterall we are just We...

I agree with you only to a certain extent. "Them" can only be "we" if they want to. And they would have to discard their prejudices, hatred and fear. All of us will of course try to engage one another in civil discussion, but ultimately we are responsible for the choices we make over what we think, what we say and how we choose to act.

I was accused of not being brave enough to broach the issue of whether or not certain words could be used by people of other faiths. I believe it is not my place to comment on that particular point of contention because I am neither Christian nor Muslim, and I do not have the requisite knowledge in theology and philology to entitle me to make an informed comment.

And that was the entire point of my post.

That the choice is in our hands. We can choose to use our thoughts, words and deeds to HURT or to HEAL. Your call. You can always choose to hurt. We have moral free will. Hurting will give you a temporary sense of power. But I have never known causing hurt and destruction to give one lasting pleasure.

This post ISN'T one on which groups of people are allowed to use what words. It ISN'T a speculation about who did 'it'.

It is about drawing strength from the courage and sincerity of others and resolving to be better and stronger than those who hate.

Dont get me wrong on my comments on what you had written on this issue. I totally agree with what you had said and i believe many others out there believe as well. What you have written showed that we are Malaysian no matter who we are regardless of race, religion etc. We are just human.

Note:
I have been following your blog for some times and I do respect what you yourself have drives to do things that I cant even comprehend doing it. All i want to say is well done!! At least I know there are still people out there who care about others/animals other than themselves....

Thank you for your support and your encouraging comments. I really appreciate it.

after this post (and how you dealt with the comments) i am convinced that a certain young lady named covertop should stand for president!

in the next general elections, count in my vote.

Sorry -- I had somehow missed responding to your comment! Thank you for your kind words. Am not interested in running for political office, but if I could nominate my own Presidential candidate, I would choose Datuk Lat, Malaysia's favourite cartoonist! In his world, everyone is good and gets along. What I wouldn't give to live in a society like that!