New Year 2010: Merrymaking in the Mangroves and Mudflats

Sometime in the final week of 2009, I decided that at least 40 of the surplus shoebox gifts I received from our generous contributors could go to the hardworking and deserving children of Kelab Alami, a nature club set up by Cikgu Bakhtiar and Cikgu Zurina, dedicated teachers who I met while volunteering with Save Our Seahorses (SOS Malaysia), in Tanjung Kupang, Johor. The club is assisted and co-coordinated by my dear friend, Serina, and the members of the club are local children who mostly come from the fishing community.

Most of the children come from low-income families, and some are from truly disadvantaged backgrounds. The objective of the club is to inculcate a love of the environment in the children and provide them with basic knowledge in natural history and ecology. Among the projects they have undertaken this year include data collection visits to the seagrass beds and mangrove forests and the establishment of an organic vegetable patch. Since the children have worked hard all year, I made plans to throw them a New Year's Day party and hand out shoebox gifts filled with school supplies and other treats.

I got the Battletank packed and mission-ready and started our journey on the morning of New Year's Eve. Serina had also informed us of pollution having occurred in the vicinity of the seagrass beds and I wanted to accompany her to visit the site to collect samples.

We arrived at Pendas Jetty in Tanjung Kupang, Johor, at 1730h. Serina, some of the children and teachers, and our marine scientists Alfian and Leena, were already waiting in the boat. Off we went to visit the seagrass beds to see what could be done to mitigate the damage done to the ecologically-sensitive area. 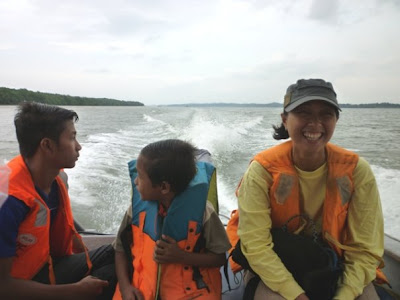 31 Dec 2009
Serina took her charges, Udin and Amal, along with us to visit the affected seagrass bed in Tanjung Adang. 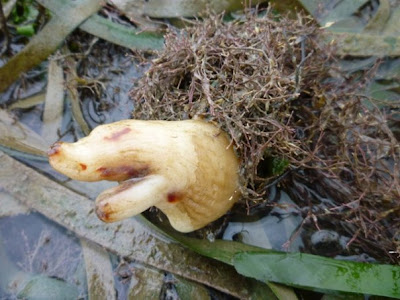 31 Dec 2009
A sea squirt at the seagrass bed in Tanjung Adang, looking rather poorly. 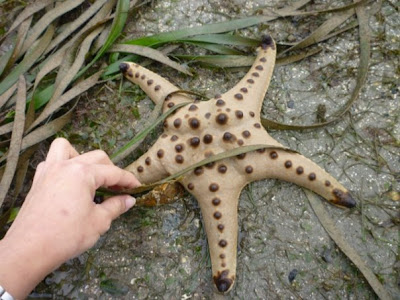 31 Dec 2009
I checked on yet another poorly-looking "chocolate chip" starfish at the pollution site. 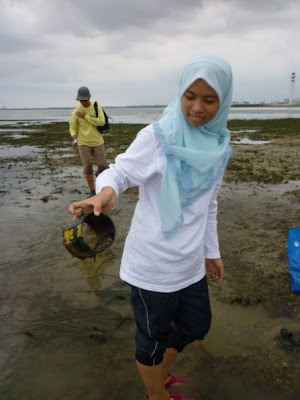 31 Dec 2009
One of the club members, Jannah, inspects the sections of pipe planted in the seagrass bed 2 months ago as part of an experiment on seaweed and seagrass habitats. 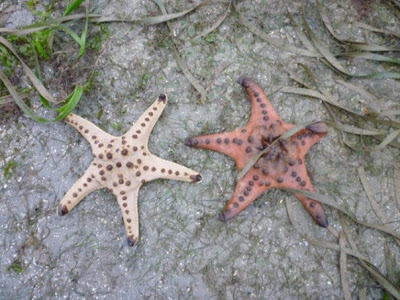 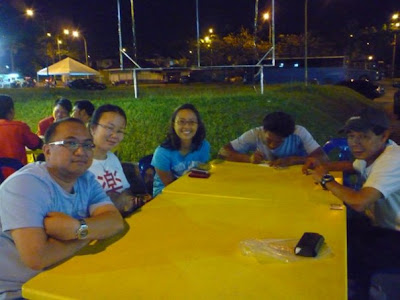 31 Dec 2009
We went out for our New Year's Eve dinner at Awana restaurant in Gelang Patah, as there were no shops and eateries open in the village after dark.
From left to right: Alfian, Leena, Serina, and Lan. 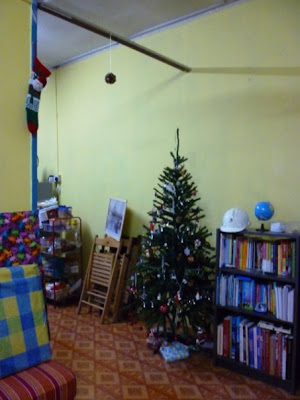 1 Jan 2010
Serina's kampung house is the only one in the entire village with a Christmas tree. The kids were absolutely fascinated by it. For many, it was the first time they have seen a Christmas tree in the flesh. 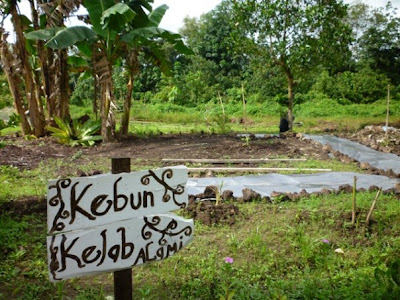 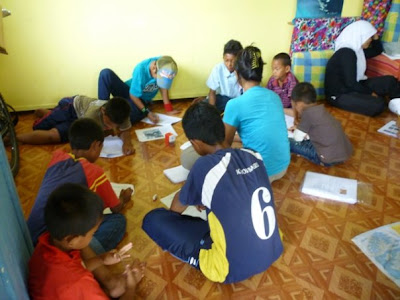 1 Jan 2010
The children started arriving for the party in the afternoon and Serina required a few of them to complete a natural history survey. 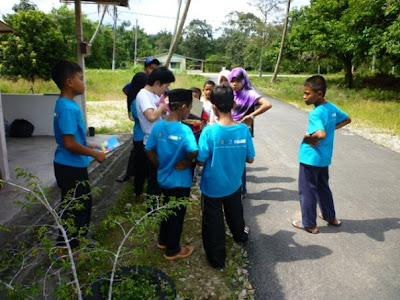 1 Jan 2010
To keep the youngsters who have completed their surveys occupied, I organised a nature-related Scavenger Hunt outside and instructed the children to search for specific stones, fruits, leaves and grasses. The first child to bring me the correct object receives a prize. This game had the children running all over the streets and climbing trees and over fences. I gave out over 20 packs of stickers, writing equipment, felt-tip pens and chocolates, which were loose items left over from the Shoebox Project. 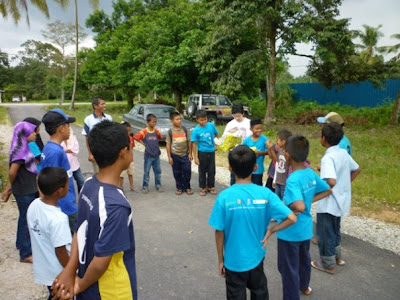 1 Jan 2010
The entire village was our playground on New Year's Day. Due to space constraints indoors, we took our Pass-the-Parcel game outdoors. My version had a natural history / Green Living component, for which the youngsters had to answer questions like "Name one way to conserve water at home" and "Name one way to improve fuel economy" before they could have the goodies buried under each layer of paper. 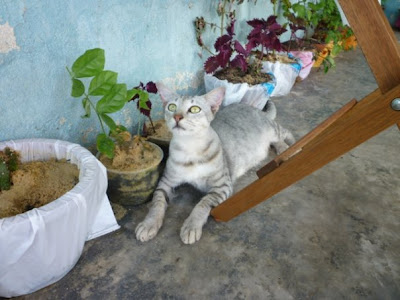 1 Jan 2010
The feline club mascot had a field day begging scraps from everyone. 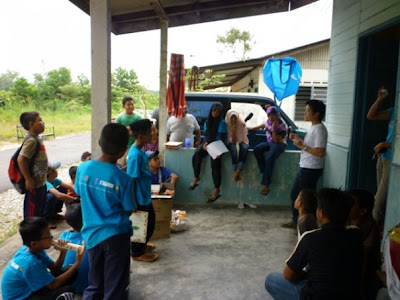 1 Jan 2010
Tea-time for the Kelab Alami youngsters does not have to be an elaborate affair. I paid for the fried noodles, green bean soup and iced syrup. Serina supplied a watermelon and lots of apples and oranges. A friend, Desmond, contributed chocolate wafers and biscuit bars. 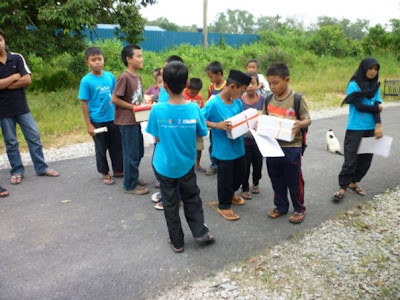 1 Jan 2010
The youngsters were all shiny-eyed and excited over the lovely gifts they received. Most boxes had high quality school supplies in Cartoon Network/Disney themes that our rural children could not afford or could not find in their local shops. The school supplies made practical but fun gifts for the children of Kelab Alami. Once again, I would like to thank our generous sponsors for their thoughtful gifts! 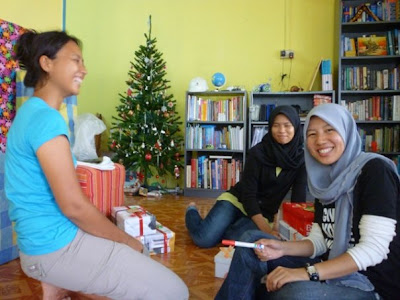 1 Jan 2010
After the party, Shoebox Elves Serina, Jannah and Cikgu Zurina helped me sort and label the remaining gifts for the children who could not attend the party. Most village children either had household chores to do or had to work at little jobs during the school holidays.

We also decided in the evening that some of the remaining gifts could go to the very needy Orang Asli (indigenous) community in Kampung Simpang Arang in Gelang Patah the following day. We opened up the boxes to make the items easier to distribute, as there would not be enough boxes for all, and even if there were, entire boxes full of school supplies would be of limited use to children who do not attend school. 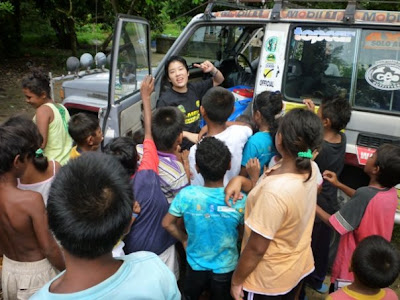 2 Jan 2010
The following morning, we dropped by Kampung Simpang Arang in Gelang Patah to distribute presents and treats to the children. I tried to make them queue up so that I could hand out school supplies to those who do attend school, and hand out presents according to age, gender and need, but it soon descended into anarchy. No one was listening to my pleas to queue up anymore. It was an unpleasant experience as I have hitherto had only positive encounters with our friends from the indigenous communities.

The children of Kampung Simpang Arang were patently impoverished. Many were sickly and clad in rags. Some had such sore and infected eyes that I was surprised they could see what I brought them. They screamed, snatched and fought with each other over the toys. I am glad we made the decision to hand out individual items rather than entire boxes and expect them to share. For our next visit, I think it would be wiser and better for us to give them clothes, soap, shampoo, toothpaste and toothbrushes instead. 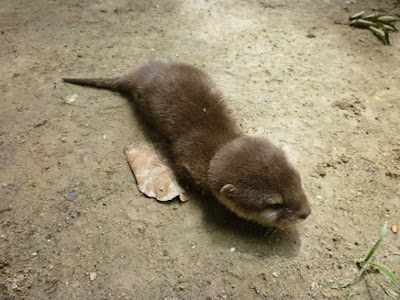 2 Jan 2010
One of the boys in the Kg. Simpang Arang Orang Asli Village had found an abandoned baby otter and decided to hand-raise it until it was strong enough to be released. Thankfully, no one tried to sell it to us and the people seem determined to nurse it back to health.

We left Johor on the afternoon of 2nd January and made our way back to Kuala Lumpur. It has been a productive and enjoyable trip, and I was especially pleased to have spent my New Year in the company of dear friends, even if there weren't any pubs, party packs or firework displays in the village.

Here's wishing all my friends a very Happy New Year 2010! I wish each of you and your families a year of joy, abundance, reconciliation and faith in all that is good.
Posted by ~CovertOperations78~ at 18:29

CO78,
Hey...the club mascot is a tabby puttytat too. It's good to start them young, gardening and cleaning up beaches all. Are you going to revisit the OA village? Yeah, I reckon those kids need more love and care. purrr...meow!

So good of you to come by! The tabby cat's name is Egyptian Mau, because he looks like one. He is very manja and remains skinny although well-fed.

The Kelab Alami kids are kept active with meaningful projects all year. Serina also provides English tuition to them. A few of them have dropped out of school due to poverty and lack of parental care but they can remain in the club and attend tuition. That's what makes this club different from school clubs.

The OA kids are too indisciplined to be taught unless we visit them regularly. I am afraid 1-2 visits a year would not help them much, although our contributions of clothes and hygiene products would benefit them.

What a meaningful start to 2010! It makes so much more sense than eating till you can't breathe, getting sloshed, and trying to drive home drunk :(

It's simply brilliant that the Shoebox Project helped put those lovely smiles on so many beautiful faces!

Thanks, dear Pat! It was a lovely trip, except for the pollution bit. We still can't get an answer. I want to take you there one day. It's so beautiful out in the kampung, so relaxing.

I like the idea of eating till I can't breathe, though. My new year resolution is to eat all I want and stay the same weight.

Kitties-in-Sydney, if you were to look closely at the picture of the kiddos standing outside in the street with their shoebox gifts, you will see a 'tompok' cat standing behind them! The kampung and fishing jetty are full of cats!

Just a quick note to say hello and let you know how much I enjoy your blog. Your pictures and stories of the activities you undertake and participate in show such a passion for your country, your environment, the animals, and people from all walks of life! In a world where so much can seem bad & negative you come across as a "positive light" for lack of a better phrase-- who much like a stone in a pond is creating a ripple effect. :) I wish you good health, happiness, and many blessings!

I could agree with MUTT more :)

Thank you so much for your kind words. For pretty much the first time in my life, I am speechless.

Mutt, you will come and visit me again, won't you?

Thank you once again.

Hi Ee Lynn, your caring spirit fills hearts with much happiness. You're a gem! Coudldn't agree more with Mutt and Pat:)))

Thanks Keats! I hope you had a great New Year celebration too! I always thought I didn't want to 'work with kids' after reading law, but I guess the genetic pull of being a teacher is just too strong! Blame my Mum and Dad, ha ha!