I have always been a firm believer that those in animal welfare and rescue circles must work together and help one another the best we can. When I started Project Second Chance, I was fortunate enough to benefit from the assistance and generosity of friends. So when an independent animal rescue group, KL Pooch Rescue, announced a fundraising dinner on social media, I felt that the very least I could do was to purchase tickets to the dinner and invite my friends as my guests. 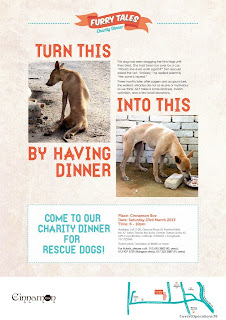 The beneficiaries of the funds include KL Pooch Rescue, which is working hard to raise funds to build their own shelter, and several independent rescuers, including senior citizens who have taken in strays but who are not social media savvy. I contacted the organisers of the event to make arrangements for the intact dogs to be neutered at subsidised rates under SPCA's Mission Help programme. 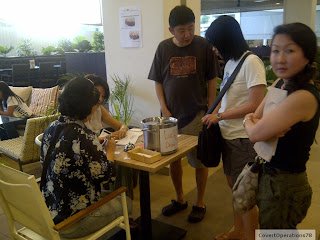 Lili and I shared a ride to the dinner, held at Cinnamon Box, Festival City Mall. Here she is, waiting for us to be seated. 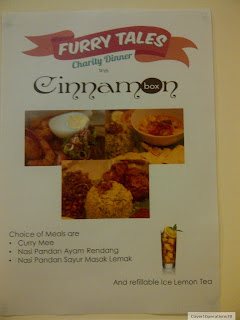 The menu was kept simple and limited to keep costs down. The objective of the dinner was, of course, to raise funds for animal rescue initiatives. We could, and did, order extra food from the restaurant, as we were quite a big party. 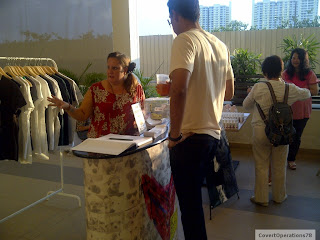 Volunteers from KL Pooch Rescue sold merchandise to raise funds for the cause. They were very persuasive and friendly, and so I ended up buying a rather cheeky t-shirt with a clear message about spaying and neutering. Bernie bought 2 t-shirts and a car sticker, while Nicole bought dog treats and baked goods. We hope they managed to raise a lot of funds even from other shoppers who didn't attend the dinner. 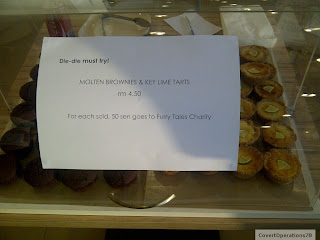 Nicole bought lovely molten brownies and key lime tarts for our dessert. I ate an entire key lime tart in spite of myself. Oh well. I could always burn off the calories the following day by helping out at the SPCA. 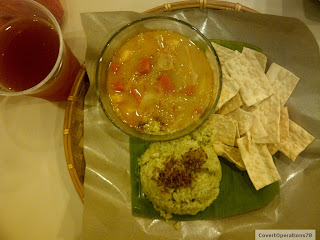 Vegetarian nasi pandan with sayur masak lemak for me, washed down with gallons of iced lemon tea. 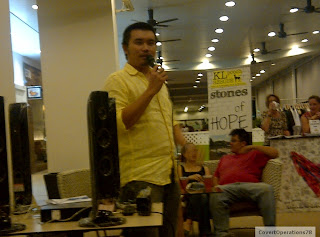 Stand-up comic Phoon Chi Ho provided entertainment for the night. Good effort, young man. We found him funnier during "Bromance of the Four Kingdoms", though. Still, it was good of him to do this pro bono. 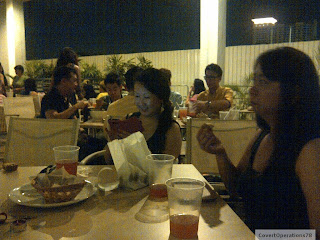 The Mall dimmed its lights at 8.30 p.m. in conjunction with Earth Hour.

Now, this may sound strange coming from an environmental activist, but I do not observe Earth Hour. Earth Hour takes time and attention away from finding real solutions, has dubious conservation and educational value and has just become another high-consumption PR and fundraising event which encourages people to drive out to shopping malls, buy the event t-shirts, candles and flashlights and pretend to care for the environment.

Lili is seen here preoccupied with her smartphone, while Nicole and I swiped her fries, after the lights were dimmed. 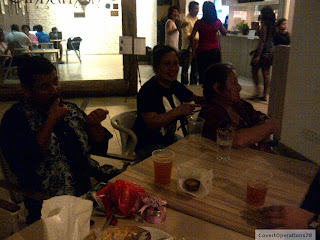 Aravind has a molten chocolate brownie while Bernie's maid (centre) and mum (in wheelchair) were kept entertained by the comedy act. 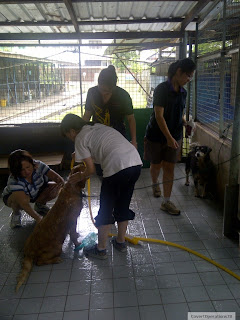 Walking the talk the way I normally do the following day at the SPCA shelter.
Three hardworking schoolgirls and their adult chaperone helped me bathe and tickwash all the Kennel D, E and F dogs before it started raining on Sunday. I managed to clean all the kennels at the back as well.

Postscript:
An update from the organisers:

This amount is made up of donations and sale of our sponsors' products.

After deducting the cost of dinners (dinners were offered at cost price), the amount is RM17,489.

I will allocate half of that (RM8,744.50) to KLPR, and the other half to an independent shelter.

KLPR will use their half for their new shelter.

I will use the other half to build the facilities that the independent shelter needs so badly.

My next step will be to send you a quotation from the contractor with the best price, and a list of what we can do with RM8,744.50.

If you require a statement of the total donations collected, with individual amounts, I'd be happy to send it to you.
For both transparency and anonymity to be possible, all donors' names appear as initials only, in alphabetical order, first name first.


I'm very excited about this. I am equally grateful and touched that you, my donours, have been so fantastic about supporting this cause. Thank you for your support, and for your trust in me.

May tails continue to wag in celebration of what we have achieved!"

Love this! I have been in doggie (and kitty) rescue for a long time and you are right, there needs to be more unity between groups - for the sake of the furry friends that they are trying to save! Way to go!

Dear Annie,
Thank you for coming over and many thanks for your support! We all need to work together. Every minute spent fighting each other could have been put towards doing hands-on work to help the animals. It doesn't matter who is doing a better job and who's a copycat or wannabe -- everyone's doing a great job, where the animals are concerned!

Great work, KL Pooch Rescue!I like the idea of buying a brick. Will do so in the near future.

Thank you for your support, Keats! You and Ravi have always been so supportive of and helpful to so many worthy causes. We can go visit this shelter when it's up and running. Hope you're well. I've been planning to come by to see you but I've been having flu for the past 2 weeks.