Dining In The Dark, Kuala Lumpur

“Into the darkness they go, the wise and the lovely.”
~ Edna St. Vincent Millay

When I first heard that a Dining in the Dark restaurant outlet has opened in KL, I wasted no time putting it on my Mighty Life List. I love the idea, partly because I am adventurous and always open to new experiences; partly because of my sense of empathy and connection with the visually impaired; and partly because it's always a good idea to sit down to dinner and focus on the food and the company without being distracted by your electronics and trying to take pictures of your food.

Aravind, to his credit, actually paid attention when I first mentioned it and made a reservation for two on the eve of my birthday, which seemed a fitting way to celebrate the completion of all 35 Random Acts of Kindness.

And so on Sunday night, we braved the city traffic to get to Changkat Bukit Bintang for dinner. The restaurant is located above Ten on Changkat and we were well over an hour early, so we moseyed around Jalan Alor for a while before we went upstairs.

We were ushered to the waiting area where we were served our welcome drinks. The concept of Dining in the Dark was explained to us by our guide, Lou. We were offered games to play while waiting that would (hopefully) enhance our sense of hearing and touch. Aravind and I tried to fish out 4 paper clips from a container of dry rice grains and beans while blindfolded, which isn't as easy as it sounds. Every rice grain felt long and angular enough to qualify as a paper clip. Then we shook 3 shakers to try to tell apart their contents, which was a bit easier.

By then it was our turn to be ushered into the dining area, hands-on-shoulders, conga-line style, by our visually-impaired "Darkness Expert", Darius, who is very professional and affable.

Once seated, however, I was struck by how noisy it was in the restaurant. When people cannot be identified by sight and are therefore anonymous, all sense of decorum disappear and they turn into absolute boors. "I like your buttocks", shouted one oaf to another two tables away. "Somebody is playing footsie with me", announces a woman to nobody in particular. If I have any recommendations for the restaurant, it would be only this -- perhaps the patrons could be advised to keep the volume down before entering, and perhaps soundproof partitions and rooms could be set up so parties can sit together and not shout at each other across the dining area, to the annoyance of other patrons.

It wasn't difficult to see how our Darkness Experts navigated the room and tableware. The tables were positioned in such a way that they know which table to go to and who sits where. There were grooves in the wooden trays so you could tell apart left from right and know which side is up. It was fun running my hands along the edges of the table and trays to find out where the grooves were.

Our appetisers soon arrived, and we had four different courses each on a tray. Aravind had ordered from the classic menu, and I of course had the vegetarian option. I think my sense of taste and smell are pretty keen, and I could discern a salad of rocket, lettuce, walnuts, dried cranberries and manchego cheese; a cold tofu topped with crushed roasted peanuts, another cold salad with penne pasta and something else warm and earthy (probably mushrooms, but I have forgotten what I ate by now because it has been 3 weeks since the visit and I didn't take notes.) Each course was a contrast in taste and texture from the previous.

2 soups came next -- a cold one (a tart, vitamin-packed veggie gazpacho) and a warm one (creamy cauliflower soup), again for the contrast. I felt rather comfortable dining in total darkness -- it's just like camping, only with less light, better food and no bugs or leeches.

Then it was time for our main course. I had a course of perfectly roasted and seasoned cocktail potatoes and brussels sprouts and a batter-coated and deep-fried bulb vegetable of some sort (I would learn later that it was fennel bulbs).

The food was delicious. You could taste the love and care that went into each dish. I ate heartily and neatly, steadily manoeuvering food into my mouth without dropping anything, oblivious to the clatter of trays and cutlery and muffled "whoops" coming from Aravind on the other side of our little table.

The final course is of course, my favourite -- dessert! We had 5 different courses. There was a cardamom and nutmeg flavoured ice cream which I had believed to be kulfi (I learned later that it was the restaurant's very own Christmas Pudding Ice Cream), some filo pastry filled with pistachio, a portion of exquisite pavlova, a choux pastry puff, and a pannecotta, all of which I managed to identify by taste and texture, and all of which I found to be absolutely delightful.

We drained our glasses of cider, thanked Darius heartily, and made our way back into the waiting room to be received by Lou. By the end of the dinner we had both felt great affection for Darius, not because of our absolute dependence on him in the dark, but because he is just so engaging, considerate and sincere that we felt like we were good friends by the end of 2 hours.

It was at the balcony seating area that Lou then asked for our feedback and revealed our respective dinner menus to us. She was, like Darius, polite, helpful and professional. I was quite sorry to say goodbye, because it would mean the end to an unforgettable evening. 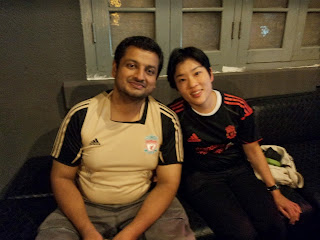 (Post-dinner shot of Aravind and me, courtesy of Lou. And no, we hadn't planned to wear matching jerseys, it just happened, because 1 out of every 10 items of clothing we own are Liverpool jerseys.) 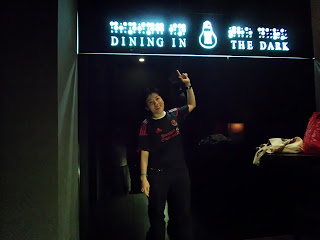 The menu is changed every couple of months to keep things interesting, so I would definitely come back for the food even if the experience is no longer a novelty for me. Our bill came up to RM317, and I think it is a reasonable price to pay for such exceptional food and service.

Ee Lynn, Interesting outing indeed. Thanks for sharing this. Now I know where to get lost in the dark the next time I wanted to do just that, in KL!

Have a nice day.

Thank you for coming over, Pak Idrus! Yes, this restaurant would be the perfect place to bring a tourist or an adventurous friend for a memorable dinner. The food is halal but there is the option of alcoholic beverages.

I know there are Dining in the Dark restaurants springing up around the world, and I've always loved the idea. Haven't got round to trying one of them yet, though, and it was a joy to read about your experience. Thanks!

Thanks for coming over, Bookface! The food was really very good. Hope to take you there sometime!