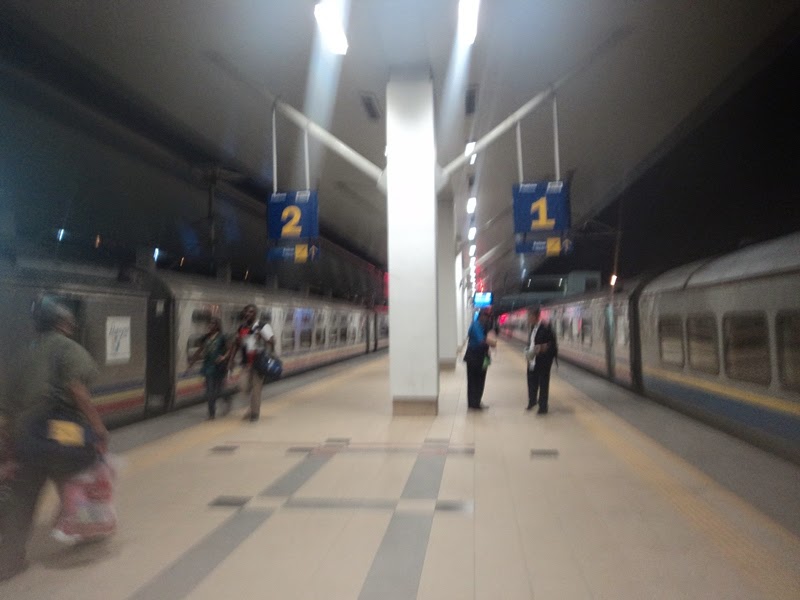 On my second trip to Penang by train on 3rd April, I had the good fortune of sitting next to a lovely older lady, Sheryl, with whom I chatted about everything from religion, feminism, political activism, and town planning to edible gardening, green living and public transportation systems. I learned later that she was the first female mayor of Nedlands, Australia, and had been active in local planning and community issues. I hope to stay in touch with her, and am glad she made my train ride so much better with her company and conversation. 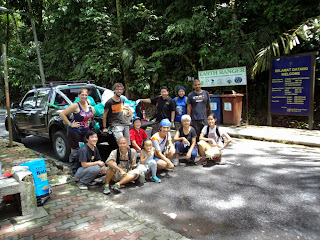 During Green Living's Earth Day cleanup at the Ampang Recreational Forest on 25th April, which was attended by 15 volunteers, my friend Shyam brought with her 3 volunteers from Yellow House KL, namely, Herlinde, Jon and Philip, who I got to befriend, along with Dee Lu of Corezone Malaysia, who is also the founder of the Malaysian chapter of Leave No Trace. It is great to get to know others who are as passionate about nature and volunteering as I am. 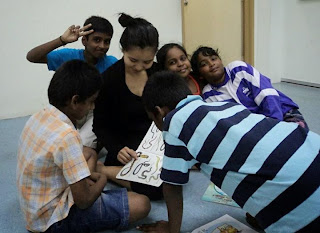 On 27th April, my friend Petra and a friend of hers, Nina, joined me at the Beacon of Hope community learning centre to volunteer their services as teachers. Petra was hijacked by the 9-10 year olds almost immediately, as they had no teacher for the day, while Nina assisted me in teaching the 11-12 year olds. So that's another perk of volunteering -- you expand your social network and get to know lots of similar-minded volunteers.

(i) Responded to an appeal by a first-time animal rescuer, Qin, for funds to pay the vet bills of Blanket the Cat via GoFundMe and am now receiving updates about the cat I had helped;

(iii) Collaborated with  Leave No Trace Malaysia in coordinating the said cleanup;

(iv) Provided free legal and tax advice to many small business owners on matters related to the Goods and Services Tax Act 2014 and how it would affect their businesses; and 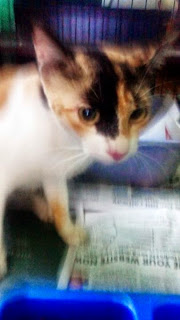 (v) Got another food court cat spayed under Project Second Chance. I've named her Maya and she is doing very well after spaying.

During our trip to Butterworth, my parents and I ate at many different restaurants and cafes, including at the Dim Sum restaurant and frozen yoghurt bar downstairs from the hotel where we were staying. 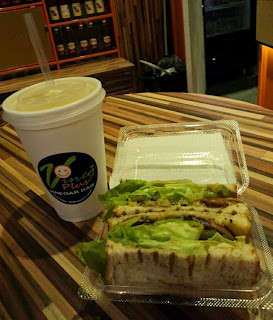 I also utilised a KindMeal coupon to dine at a sandwich and juice bar new to me, Vinegjoy Plus. The food was wholesome but I was disappointed to find that everything was packed in plastic and styrofoam. I don't see the need to pack food for dining-in so securely in disposable plastic packaging. It's not likely that the sandwich will make a daring escape from a plate, or the juice cup would need to be insulated against extreme weather conditions and steep drops off high places. Until they make some changes to their packaging and waste policies, I don't think it is likely that I will eat here again anytime soon.

April has been quite a month for trying new foods. I want to focus more on fresh produce rather than just new places to eat the same old things. In April, I tried and loved four new things: 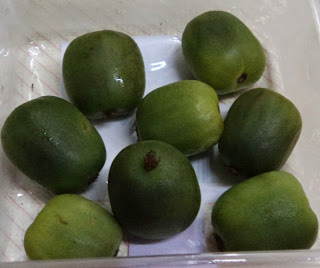 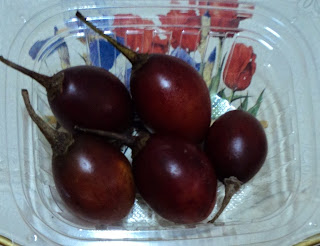 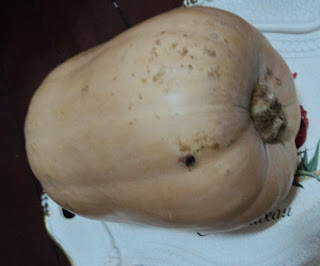 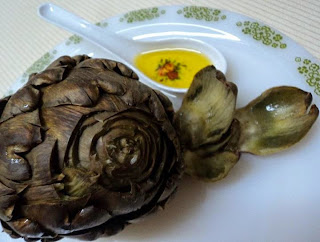 The next items on my list would be champagne grapes, Australian yellow squash, horned melon, rutabagas, parsnip and kohlrabi. 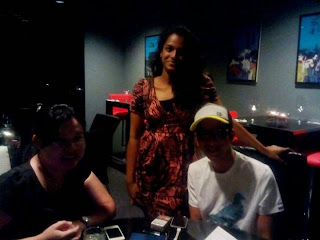 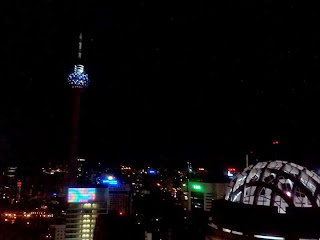 My good buddy Arnaz returned from his posting in Egypt for a break, and Karen, Shamini and I took him out to the KL Heli Lounge for dinner and drinks. The view was fantastic even if the food wasn't. Next time, we will have dinner before going there for drinks and the view. 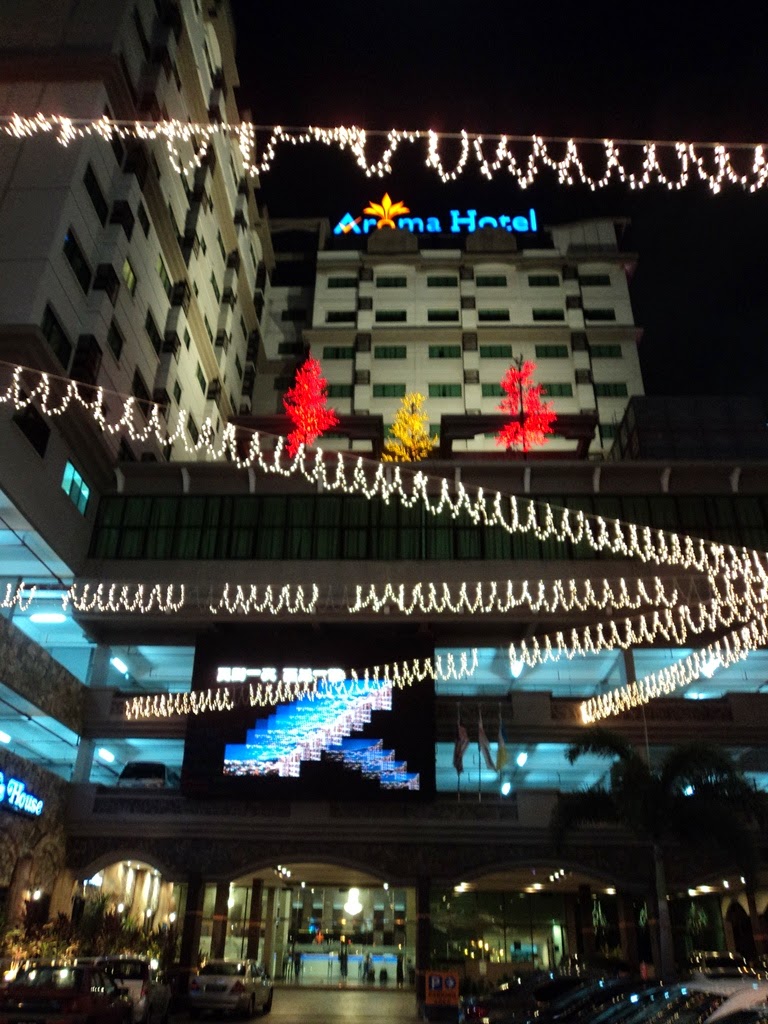 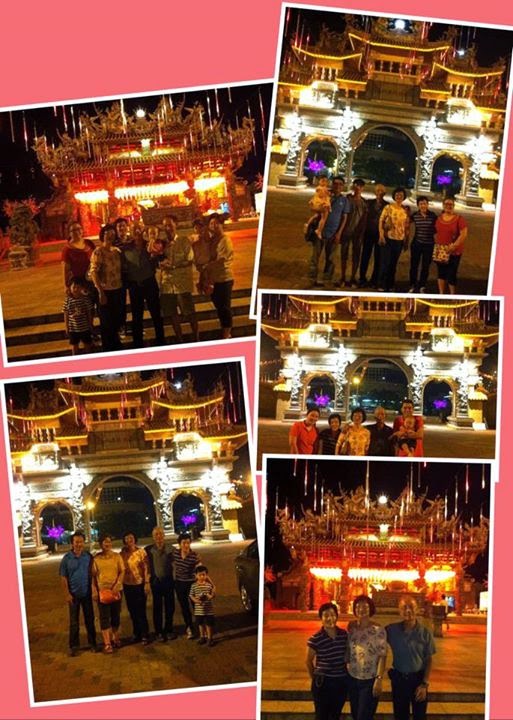 During our trip to Butterworth, my parents and I stayed at the intriguingly-named Aroma Hotel and visited a new Taoist temple in town. 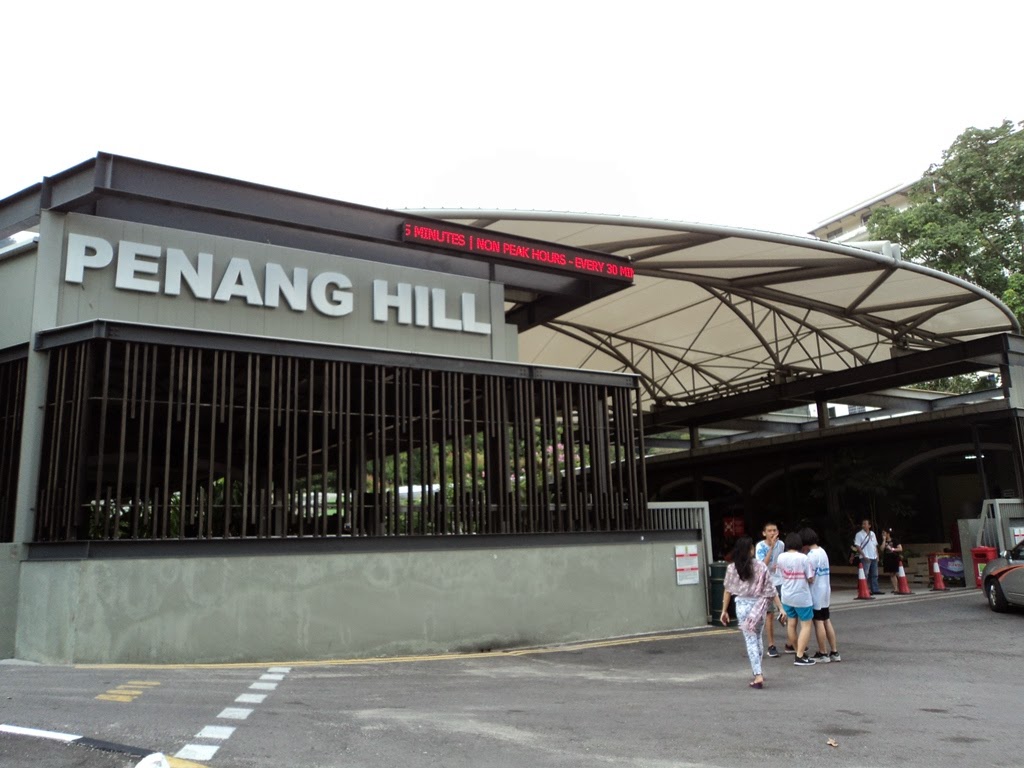 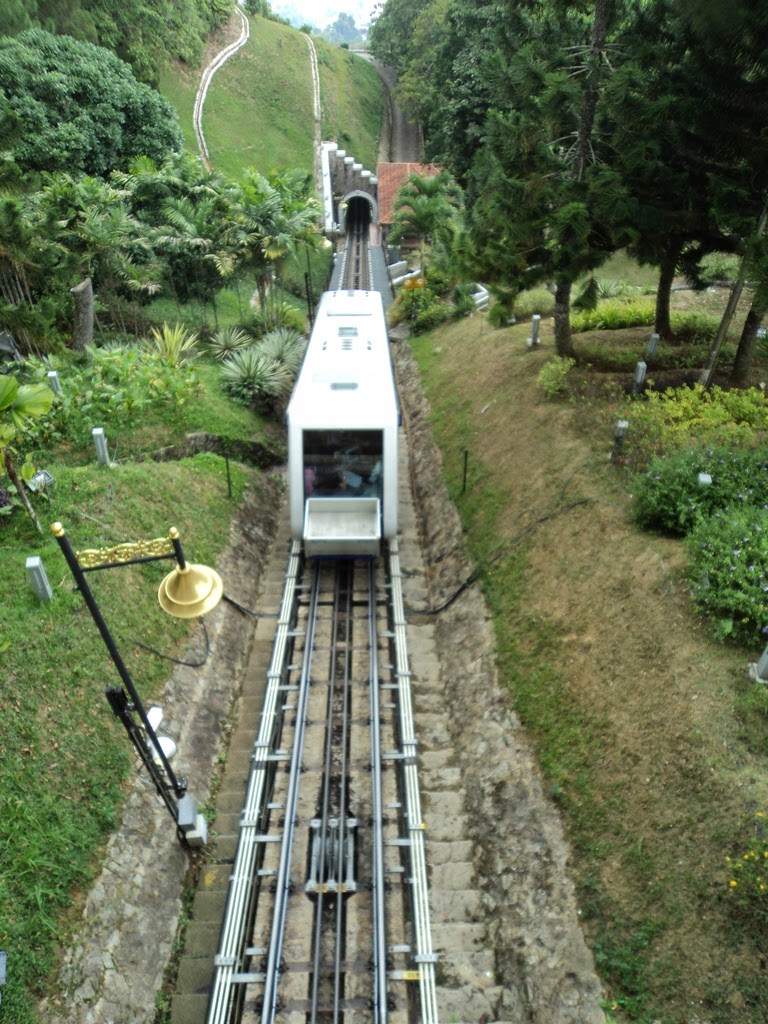 On my second work trip to Penang Island, I had the opportunity to visit Penang Hill and ride the funicular train. 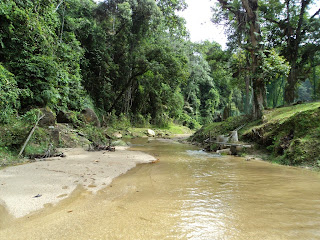 And believe it or not, Green Living's cleanup programme at the Ampang Recreational Forest on 25th April was my first visit there. I have never previously been inside the forest. But I know that there's bound to be litter in it, as with all recreational parks, forests and beaches in Malaysia. 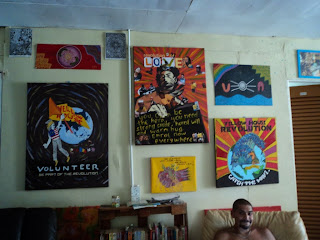 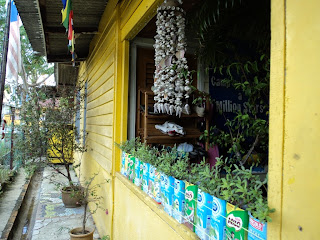 After our Earth Day cleanup at the Ampang Recreational Forest, I offered to give the 3 volunteers from Yellow House KL a ride back to their volunteer hostel, which is nearby. I've been friends with Shyam for years but I have not visited the volunteer hostel she coordinates and manages. It was a fun visit, and I took Shyam and the 3 volunteers out to lunch and to play with the guinea pigs and other animals at the SPCA in the afternoon. It seems odd to me now that I haven't been to the Ampang Recreational Forest and the Yellow House volunteer hostel until then.

April wasn't that great a month for learning. I did, however, learn many things work-related. My knowledge on corporate and commercial matters is expanding, and I hope my skills are, too. We had a Lexis Nexis staff come in to our office to show us how to use the legal research software, but it counted more as a memory refresher than actually learning something new. I had been a Lexis staff member years ago and had used their legal research software for work back then.

After my infuriatingly useless Samsung Galaxy SII died out on me, I had no choice but to buy myself a new phone. It was the day before the implementation of the Goods and Services Tax, and many of the better cellular phone models had been sold out thanks to panic buying by people wishing to avoid tax. I had to settle for a cheap Lenovo, which turned out to have a better battery life that the rubbish Samsung I had before, and all the same functions for only half the price. My only complaint was that I had to settle for a phone with a lousy camera which doesn't focus well. I learned to install and use Camera360 to take slightly better (more focused and less blurry) photos, and purchased a FlashAir card to use with my digital camera so that I could upload the photos onto the phone directly. I'm adjusting well to the new phone and getting used to carrying the camera around, so it's no longer an inconvenience. I occasionally help out the Buddhist Tzu-Chi Merit Society with their charitable projects, especially with their recycling programme at the community centre up the street from my house. One Friday evening, I was invited over for what I thought was a normal recyclables sorting session, but was quite delighted to find that one of the members was conducting a vegan cooking class. We learned how to make a dish called Fried Golden Mushrooms in Spicy Pineapple Sauce and got to sample it too. 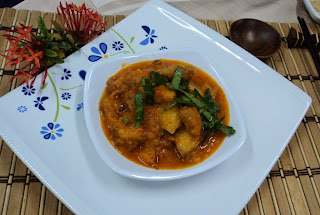 I reproduce the recipe here:
Ingredients: 300g Monkey Head MushroomsIngredients (A):- Small pieces of turmeric- 3 pieces of Buah Keras- 6 pieces of dried chillies. 1/4 of a fresh pineappleSeasoning: - 2 teaspoons of sugar- 1 teaspoon of mushroom powder(The written recipe left out salt, cornflour and cooking oil, so add your own)Directions:1. Grind Ingredients (A) into a paste.2. Put the pineapple through a blender.3. Clean and slice mushrooms. Coat / toss in cornflour. Fry mushroom slices in oil until golden brown. 4. Fry Ingredients (A) in a pan until fragrant. Add pineapple paste and mushroom seasoning powder. Let it simmer until the sauce thickens. 5. Add mushrooms into the sauce and stir evenly. Turn off heat and serve

I lost count of the number of items I decluttered and purged from my Bachelor Pad in April, but I believe it goes into the hundreds. There was a surprising number of things I forgot I had left in the tool cabinet and ironing drawer. Now I just have to keep them in a prominent place to remember to use them, and get rid of things I am not able to use.

I had been spring cleaning the parental home as well each weekend, one drawer and one shelf at a time. Most of the items I end up culling are outdated documents and papers, so most end up being shredded for use as cat litter liners.

I have to be honest here. I haven't been very good at sticking to things for an entire month, and there are occasional lapses. I had planned to go low-carb and gluten-free in April, but found it difficult to do so on weekends when I meet up with friends for meals. I ended up having low-carb gluten-free weekday meals for 3 weeks in April, which I consider no small success considering my love of carbs.

I replaced gluten and carbs with brown rice, cauliflower rice, butternut squash and garbanzo beans. Here are some of the bentos I made for my meals in April. 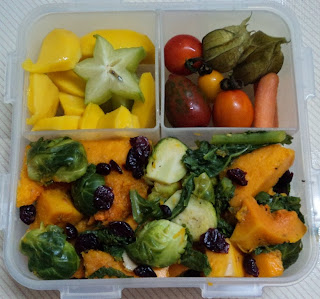 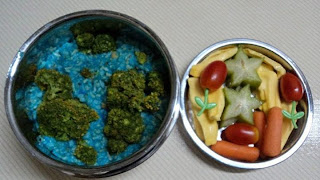 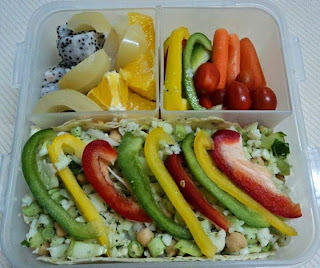 I think the reason why people lose weight when on a gluten-free, low-carb diet is because it takes so darn long to munch on a large bowl of grated blanched cauliflower. Starches are so much easier to eat. I can sit in front of the computer and shovel down a mountain of rice or pasta. But switching to cauliflower rice and squash with sprouts and kale made me eat more slowly and mindfully. I couldn't even finish everything in my lunchbox by the end of lunch hour. I was just chewing and chewing the cud like a cow. I like the increase in energy levels all the fibre, vitamins and vegetable proteins give me, though, and will probably prepare gluten-free, low-carb meals as frequently as I can after April.

Upon reading the news that the Ministry of Agriculture and Agro-based Industries wanted to increase exports of Malaysian coral reef products last month, I wrote a Letter to the Editor and sent it to all the major local papers and news sites, stating the reasons why the sale of coral reefs would cause irreparable harm to the environment and would not be as economically viable as the Ministry would have us believe. An edited version was published in the Star on 1st of May. They had removed a short paragraph in which I had commented on Malaysia's reputation as a wildlife trading hub. That's fine by me, I can understand the reason why they cut it out of my letter. I just hope that those in a decision-making capacity reads my letter and considers the points raised.