Running Our Way Into the New Year

My initial plan at the beginning of 2015 was to usher in the New Year at a street party and then end the night with a gathering at the Wee Green Flat. I love the crowds and chaos at street parties, and this is something I could never adequately explain to the more introverted of my friends. I had been doing the same thing for years, attending the New Year countdown down at the neighbourhood pub, and in 2015 I wanted things to be different.
However, Mini-Me's illness and deterioration in December made me change my plans and ended all desire to celebrate. I wanted to just stay home and keep her company, and as such, made no arrangements to join my friends for the countdown festivities.
My fitness-inclined friends and fellow mentors from Care2Run, however, invited me to join them for a New Year's Eve run at Desa Parkcity, a few kilometers away from my flat. Prem Kumar persuaded me that it would be good for both me and Mini-Me that I go out for a run, and that as it would only be for a few hours, it would not gravely affect Mini-Me's well-being or heath. He even arranged for another mentor to drive over to pick me up to reduce the number of cars on the road. Thus convinced, I assented, and so after work on New Year's Eve, I showered and changed into my running gear, filled a small backpack with snacks, beverages, rubbish bags and a First Aid Kit, and made my way to the park with another mentor to join the others in our running group. 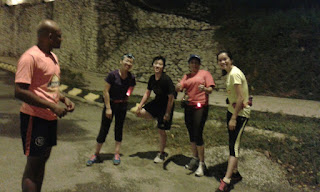 Thiyagu, Lauren, Nita, Mee Leng and I limbered up and stretched prior to beginning our 6-8 k.m. jog. 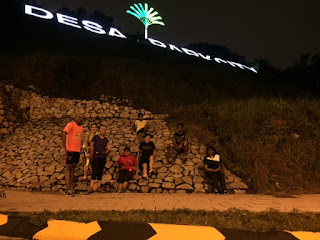 Hari and family joined us, and we took a photo at the slope under the illuminated sign. 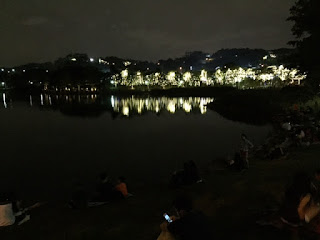 We ran around the park and lake. Many revellers were already there for the New Year countdown. Most people were dressed to the nines for the street party, and stared at our ragtag running group in surprise.

We ran up a hill with a good view of the park and neighbourhood, spread out our picnic tarp, and lay out the food we brought. It turned out to be a really good place to watch the fireworks from. 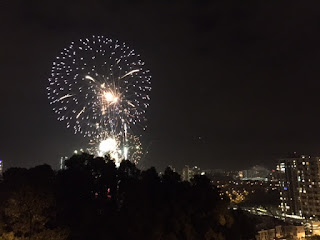 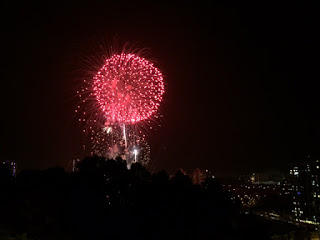 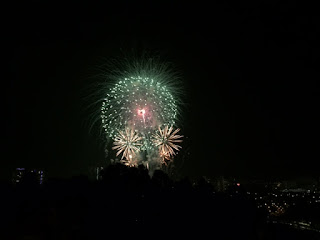 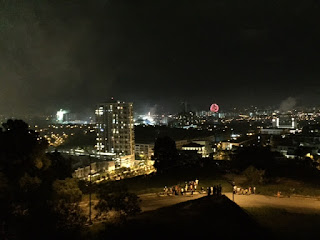 At the stroke of midnight, we could hear the muffled sounds of music and cheers from the crowd below, and pyrotechnics lit up the night sky.
We drank to each other's health and wished for a healthsome, positive and peaceful year for all. 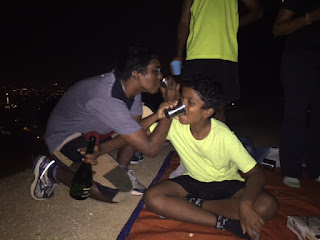 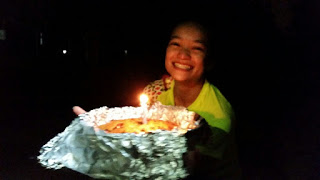 We had a belated birthday celebration for Mee Leng but forgot to include Prem in the birthday song although his birthday was only a week ago.
Before we descended from the hill, Hari and I picked up litter left by other hikers and picnickers. I think my friends are getting used to my habit of taking rubbish bags and gardening gloves along with me everywhere by now. 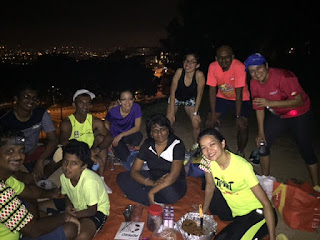 May we all beat our personal bests and have lots of wonderful adventures in 2016!
Posted by ~CovertOperations78~ at 16:30