Greening it up for the New Year

Green Living's objectives have always included promoting environmental responsibility and volunteering to families and the younger generation. It was with this in mind that I organised our annual Turtle Volunteer Programme, visit-and-volunteer sessions with other NGOs, and cleanup and tree-planting campaigns. 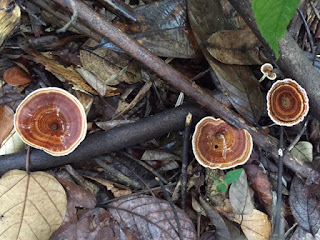 For New Year's Day 2016, I wanted to come up with a programme that would help all of us start the New Year right, and thus obtained permission from the State Forestry Dept to plant trees at a degraded area within the Kota Damansara Community Forest. I know Balu Perumal, our Science and Conservation guy in the Malaysian Nature Society secretariat, has been planting merbau saplings to be transplanted in forest reserves, and requested 50 saplings from him, which I collected on New Year's Eve. The Green Living New Year's Day Forest Cleanup and Tree Planting session was off to a great start already.
Around 15-20 people indicated on Facebook that they intended to attend the event, but on the day itself, over 35 volunteers showed up. This is a surprise since the opposite is usually the case. Since there is no registration fee or forms to fill, people usually click "Going" but don't show up since there are no consequences for not attending.

It was wonderful to see Hari, Goutham, Jey, Thiyagu, Mee Leng and some of my fellow C2R mentors and running buddies there at the forest reserve bright and early. What absolute troopers they are! We were also joined by a few members of the Kota Damansara Community Forest Society. 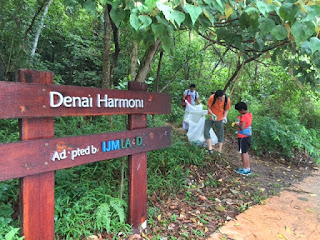 While waiting for stragglers to arrive, I handed out rubbish bags and gardening gloves and the volunteers got to work cleaning up the areas at the head of the jungle trail. 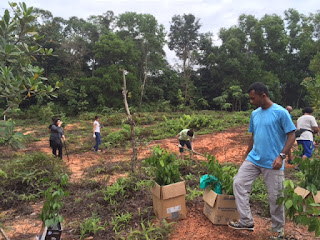 It was starting to get hot, so Prem and our friends from the Orang Asli community led the way to the tree-planting site to transplant the merbau saplings. Our Orang Asli friends affirmed that it is a good site for planting, as there is good drainage. Merbau cannot thrive in soft, loamy or waterlogged soil. Two officers from the Forestry Dept arrived to monitor the tree-planting, and wished me a Happy New Year and left after being assured that all was well and our volunteers know what they are doing. I helped coordinate the initial work and then left Prem in charge and went back to the head of the trail to meet up with the latecomers who had lost their way. 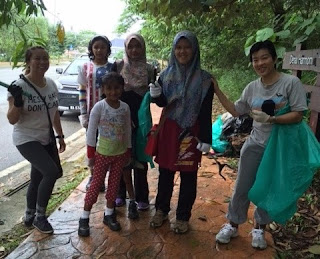 My bestie Nicole arrived, as did Shamila and her homeschoolers and my old friend Ili Fatimah and her friend Hanna. I was especially delighted to see Ili again. We first met when she emailed me to offer to volunteer for my Eco Kids Nature Day Camp in 2009. She continued to volunteer for a few more events and then left to study engineering in Japan under a government scholarship. Upon graduation and return to Malaysia, she just picked up where she left off and continued volunteering as though she had never left. Society needs more people like Ili. What a great New Year's Day this is turning out to be! 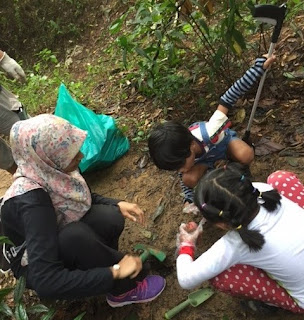 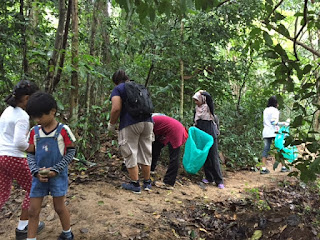 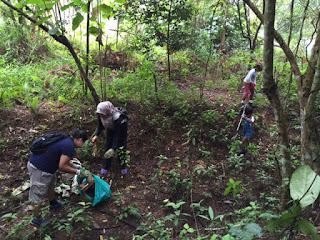 We took a long time meeting up with the tree-planting team because we were so busy digging up old polythene planting bags the entire trail. Some idiots on a corporate social responsibility project obviously thought that they were doing such a great job of planting trees for the forest reserve that they hadn't realised how much more harm they had caused by leaving plastic bags half embedded in soil. 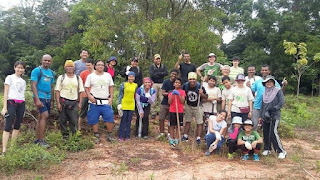 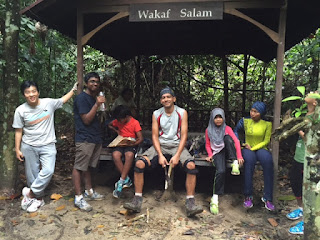 The tree-planting team finished planting all the trees and made their way up to the gazebo at the top of the hill to meet us, picking up litter as they walked.


We arrived at the gazebo at the top of the hill and joined the others for breakfast and refreshments. I brought enough bananas and soy milk for everyone. The Kota Damansara Community Forest Society members supplied nasi lemak wrapped in paper and banana leaf, made by a member of the local community. There was laughter and happy conversation all around. 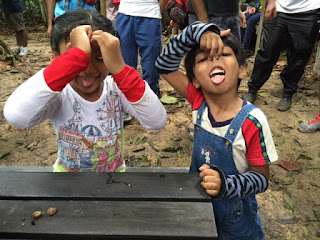 Two of our youngest volunteers, Sarah (age 8) and Justin (age 5) kept picking up snails to play with, so I asked them to pose with their snail companions. This is their best pose. I swear I will email this to their mother in 20 years to include in their graduation / wedding slideshows. Crazy happy kids! 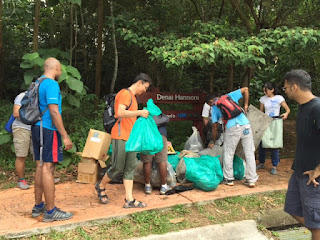 We continued to pick up litter on our way back downhill and hauled all the rubbish out of the forest reserve to be disposed of in the large rubbish bins at the park across the road. 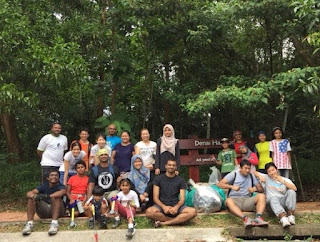 A group photo for posterity. What a beautiful portrait of my Malaysia this is! Volunteers of all faiths, ethnicities and nationalities coming together to do something positive for Mother Earth on New Year's Day! 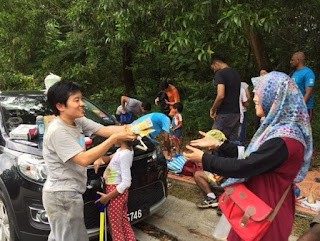 But wait -- that is not all! Cleanups can be exhausting, boring, thankless work, and I didn't want the volunteers to go home empty-handed. The night before, I raided my cabinets for things I can give away as prizes -- a Green Science dynamo torchlight kit, several rattan brainteaser puzzles made by the indigenous communities in Endau-Rompin, and sets of biodegradable ballpoint pens. When we gathered around for a group photo, I asked all the volunteers to stick around for a little something extra. Most were tired and only too happy to comply. Shamila made sandwiches and most of the others brought enough food to share. While they were munching away, I got them to write their names on little slips of paper, which I then folded up and tossed into a jar for a Raffle Draw.
Names were pulled out and prizewinners were loudly applauded and cheered on, even for the smallest and silliest of gifts. It helped that we had a captive audience who were still sitting there munching on their second breakfasts! 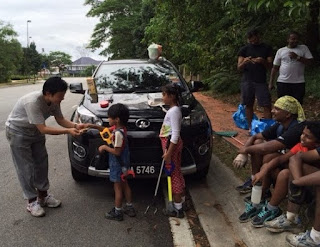 The cheeky duo received one of my rattan indigenous puzzles. 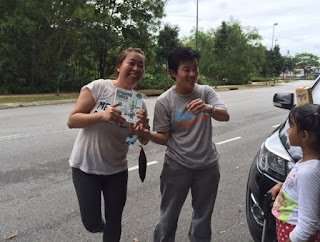 Nicole won the main prize! I swear this wasn't rigged. As you can see, she was thrilled beyond words. She loves model kits and DIYs, my best friend does! 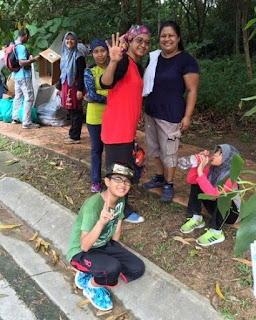 But the rest didn't have to go home empty-handed either. Prem and Hari had the bright idea of giving out the unopened packets of snacks from our New Year's Eve running session and picnic the night before. This was a welcome idea, especially since there were lots of treats such as Pocky Sticks from Hari's recent holiday to Phuket Island.

A great start to the New Year. So many people willing to do hands-on work to make a difference. So many people resolving to volunteer more and be more environmentally responsible in the new year. So many strangers turned friends (A special shoutout to Vinod, who responded to Shehryar's request for transport, and thus helped a stranger who then became a friend). So many old friendships rekindled. So many young families and parents getting their children involved in community service. So many wonderful people doing what they can to put things right.
Posted by ~CovertOperations78~ at 20:44

Hi, love what you do for the environment. Enjoyed reading thru your hard work, and the very nice pictures. And noted the many volunteers helping out. Outstanding!
Well done. The World needs more people like you.
Best regards,
Lee.

Thank you very much for your kind words of support, Lee!