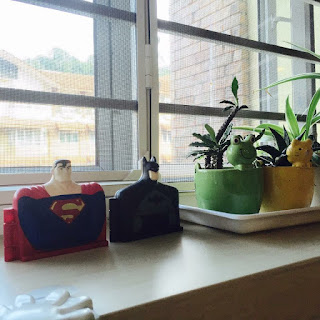 So I hear it is spring in many parts of the world right now. Nope, no change here in my neck of the woods. Hot, humid and hazy as usual. With intermittent rain that leaves dusty streaks all over one's car.
The Spring Equinox / Easter weekend had been a rather busy one, even by my standards.
'Superman vs Batman: Dawn of Justice' opened in cinemas that week, and I caught the midnight screening on the 23rd and agreed to go again with Angela and Rudhra on the 25th. 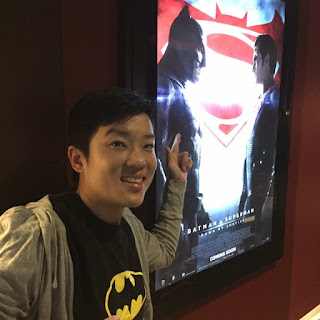 I am clearly taking sides and making no apology about it. 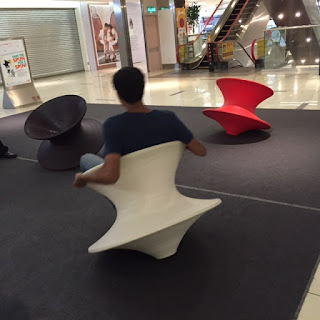 While waiting to enter the cinema, we wandered around the shopping mall late at night after all the shops have closed. Rudhra and I decided to play on the Spun chairs until the kindly security guard came to ask us to leave politely.
I watched 'Dawn of Justice' twice only because of Jeremy Irons and Gal Gadot.

Cavill is rather attractive and Affleck is charmingly broody, but I would rather have Mr. Classical Actor with the Crisp Manly Voice anytime.

If I am ever in a relationship again, I want my partner to whisper that to me. The dialogue was otherwise cringeworthy and the plot illogical and full of gaps. I love Batman but he delivered some of the worst lines to ever come out on the big screen. "That is the smell of fear. You are not brave. Men are brave". What in damnation? Did they get someone's 9-year-old nephew drunk  on Mountain Dew and set him out to write the script with a crayon? Batman, you're just being an asshole. Superman wasn't being a coward, he was dying. Suffocating is not the same thing as chickening out.

Still, watching Gal Gadot make her dramatic entrance made it worth the ticket price. Of both tickets. 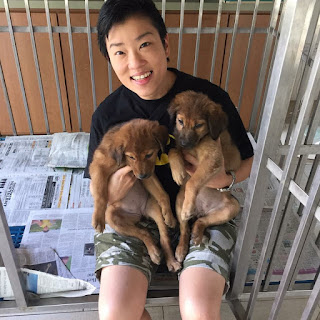 Saturday was spent at the SPCA animal shelter, bathing and tickwashing dogs and Frontlining cats as usual. Here are two of the puppies we had at the shelter that particular weekend, Porsche and Mercedes, both female. They have since been adopted together by a loving and deserving family.
After tidying up at the shelter and showering, I barrelled over to KLCC to meet up with Angela and Rudhra for dinner. 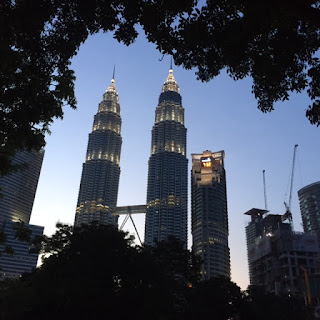 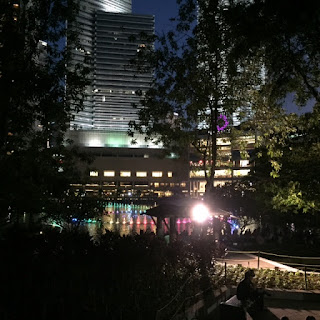 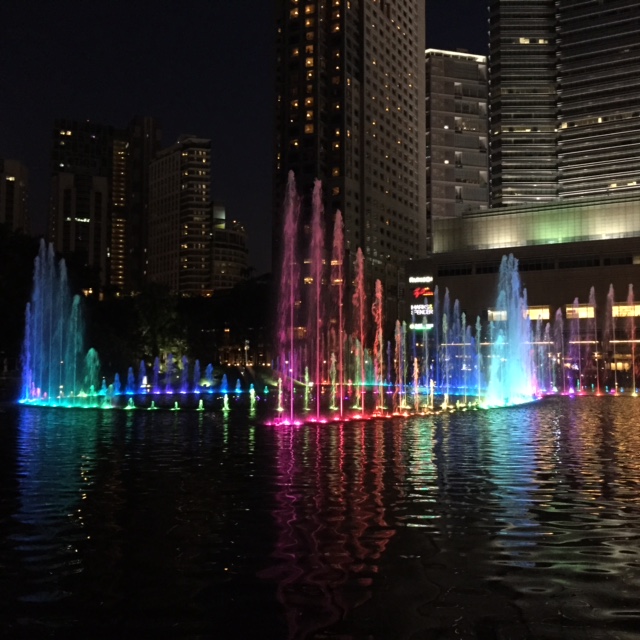 I have always loved KLCC Park especially at sundown, when the lights are switched on but the sky is not completely dark yet. The musical rainbow fountains may be kitschy but I still find them rather captivating.
The actual reason we went to KLCC that night was to check out the giant indoor slide for adults at Avenue K, because I had read about it on TimeOutKL and wanted to have a go on it before it was dismantled. Angela declined to have a go, but Rudhra and I went to town on it. 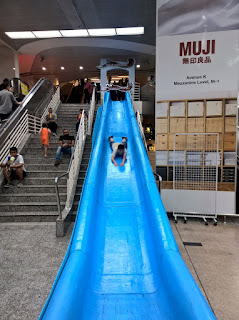 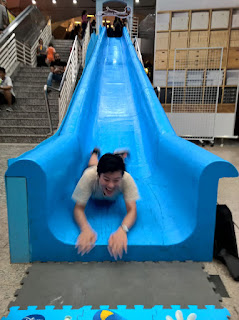 Of course I had to do a 'Superman' on it like the big nerd that I am.
I should not have stayed out so late on Saturday night knowing that I had a race to participate in on Sunday morning. I had registered for a charity challenge run to benefit the Turtle Conservation Society of Malaysia. The event could have been better managed. There was insufficient information on the run. I didn't even know the distance, the 'challenges' involved, whether it was a proper competition or whether there would be race kits and finisher's medals until I was at the starting line. I did it to support and advance the cause of the Turtle Conservation Society of Malaysia, of which I am a life member and volunteer, and that was all that was important to me.
I signed up alone but made friends with the other participants standing to my left and right during the warm-up session. The organisers had run out of race shirts by then but I didn't mind as I didn't really need another shirt. I have given all my race shirts to the homeless through Kedai Jalanan, our pop-up street store, anyway.
Well, the participants were split into two groups due to the narrowness of the starting point, so there was no way of getting a fair or accurate assessment of the runners' speed. Good thing the organisers didn't plan on giving out prizes to participants who crossed the finish line first, or they would have started a riot. The event also entailed running up and down the steep speedbumps and hillocks on the mountain bike trail, through a web of old rubber tyres and through a pond made by filling up the bowl at the skate park with water.
I crossed the finish line with my 'turtle egg' intact and claimed both my finisher's medal and 'mystery prize' (a keychain) and went to the Turtle Conservation Society booth to chat with my friend, the co-founder, Pelf, and her amiable and supportive mother, who seems to be the most regular volunteer for her daughter's cause. 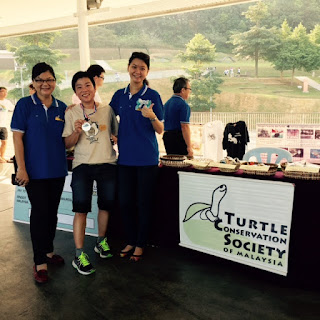 With Pelf and her Mum at the Turtle Conservation Society of Malaysia booth. And yes, I ran in jeans and the previous night's clothes because that's how I roll. Of course the cuffs of my Bermuda jeans got wet while I was wading through the skate-bowl-pond, but it wasn't dirty or uncomfortable to sit in or anything.
Went home to do an Easter Egg Hunt for the Rowdies since it was Easter Sunday after all, and my niece is still too little to hunt for eggs.
I managed to get flat-bottomed plastic eggs from 7-Eleven to make it easier for the eggs to stand on one end. Then I filled each egg with Greenies and other cat treats and put the lids on loosely so that my cats could still smell the treats within. I shook the treat-filled eggs to get their attention and then hid the eggs all over the house. 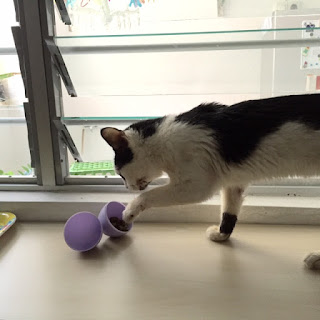 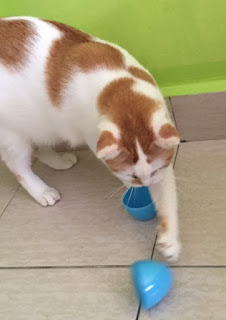 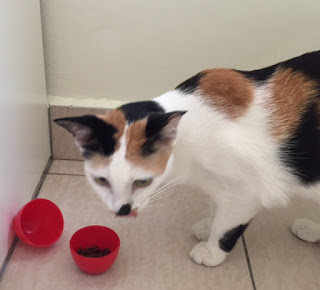 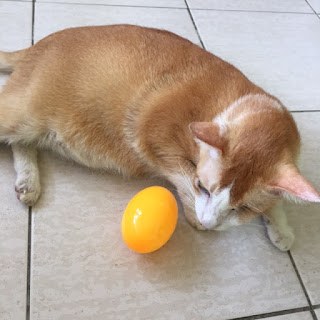 It was a great success. Classic animal enrichment activity. The Rowdies loved hunting down and opening up their Easter eggs. 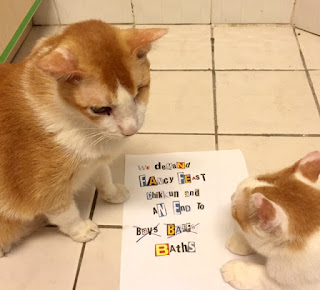 These two. Up to no good as usual. 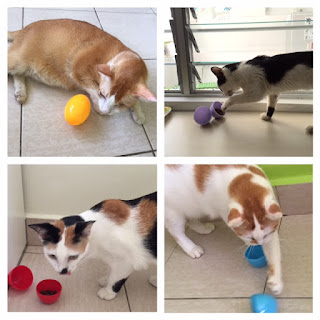 What a pawsome Easter for my pawsome little family.