Game On At The Wee Green Flat

The Backstory: ICL Surgery:
Getting Lasik surgery done has always been an item on my Mighty Life List. I have been wearing glasses from the age of nine and lenses from the age of 18, and I wish to experience travelling, camping and outdoor activities without the hassle of lugging contact lens cases and cleaning solutions with me everywhere. Also, my eyes have also become more sensitive over time and are prone to allergies.

Following the recommendation of several physicians, I underwent an assessment for Lasik at ISEC in January, but was informed that my corneas are too thin. The alternative would be Implantable Contact Lenses (ICL), which has significant advantages over Lasik and other forms of treatment, but would be considerably more expensive. I decided to go for it and underwent the surgery on 25th February.

It went well and I was discharged within a few hours, and my best friend Nicole came to pick me up, take me out to dinner, drive me home and clean the cat litter trays after the surgery. She even brought me blueberries to speed up the healing process. Thank providence for best friends!
The healing process went as well as I had dared to hope for. It was like getting a brand new pair of eyes. I have never seen so clearly in my life. I seem to have been living in a fudgy foggy world all this while until I had the surgery done. I felt some initial guilt for undergoing an expensive and unnecessary 'luxury' surgery when there are so many people and animals in grave need of medical attention out there unable to pay their bills. However, my friends reminded me that it is no crime to take care of ourselves, and having healthy, strong eyes that are not allergy-prone would probably help me be a better volunteer. I will be able to work for hours without having itching rheumy eyes now. I might probably even see in the dark! Maybe my eyes will even shoot laser beams! Or perhaps I will develop x-ray vision that will help me locate missing animals and hidden wildlife snares!
I have awesome friends, I know.
As part of post-surgery care, I was advised not to swim, play high-impact sports or expose my eyes to dust, dander or other possible allergens for at least a week. So for the first time in decades, I was not able to volunteer for a single cause all weekend (except draft letters to the editor, newsletter articles and committee reports for the Malaysian Nature Society, review a Press Release for MYCAT and update on some event preparations for Raptor Watch).
The Game Plan:
My friends Rudhra and Angela then made plans to keep me company on Saturday night by bringing the gang over for Game Night at my Wee Green Flat, something we had previously indicated interest in doing but never got around to. I have BioViva, Jenga, congkak, card games and rattan puzzles. Our friends Hari and YJ have a greater variety of board games and agreed to bring them over so we would have more to choose from.
With great anticipation I cleaned up the flat and got ready for my friends' arrival. Hari, YJ, Ming, Rudhra and Angela were ushered in with much enthusiasm. 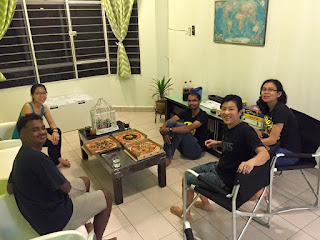 A pizza dinner was the first order of the day. 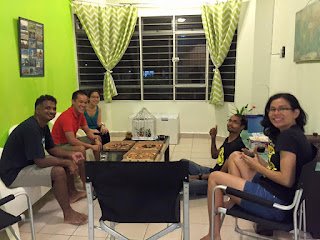 I mixed whiskey-and-ginger-ale and Malibu-pineapple to loosen everyone up a little. The pizzas were duly devoured. Bowls of fruits and snacks went around the coffee table as we discussed the rules and instructions of games. 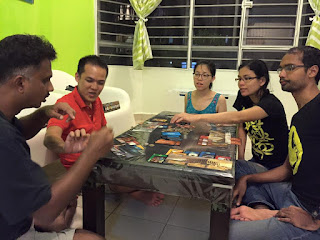 We settled on Seven Wonders because it sounded sufficiently complex and interesting.
I did poorly in the first round because I was still figuring out what I could and could not do. But Angela and I beat all the guys in the second round to emerge champion and runner-up respectively! You're going down, Halicarnassus! You're routed, Zeus at Olympia! Ephesos B shall prevail and emerge victorious! 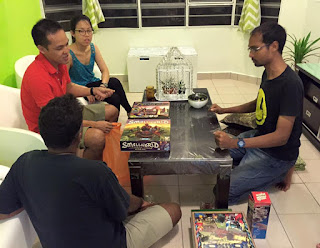 So engrossed were we in the game that we played for hours and didn't have the opportunity to play other games. This can only mean one thing: We need to schedule regular Game Nights! I would be happy to host them anytime. 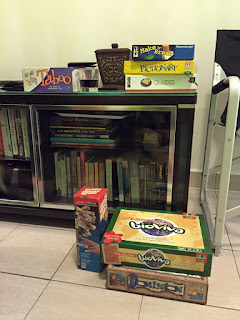 So many games, so little time! We have to do this again soon! Thank you so much for coming over, guys!
Until then, Ephesos B, out!
Posted by ~CovertOperations78~ at 14:02