So this was Christmas. I hope you had fun. The near and the dear ones. The old and the young.
There were some initial plans to go out for a slap-up Christmas Eve dinner or Christmas Day brunch somewhere and maybe exchange a gift each with my friends, but that didn't seem particularly appealing, meaningful or original to me. Most of my friends and family were travelling and in between house-sitting and pet-sitting for everyone and juggling my own work and volunteer commitments, I didn't have much time to make dinner or brunch plans.
I was steadfast about spending my Christmas with and on shelter animals, however, and my friends Nicole, Mohala and Greg were totally on board with me on this matter. I had made an initial donation to KL Pooch Rescue and had been in contact with the founders, and so made an appointment to visit on Boxing Day. Nicole contacted Second Chance Animal Society and made an appointment for Christmas Day. Both shelters allow visitors and volunteers only by appointment. We chose these two shelters because we already spend so much time, energy and money on the SPCA, and decided KLPR and Second Chance are worthy beneficiaries because their founders and managers usually keep out of the hate-filled politics infecting so many local animal rescue groups. These organisations are reasonably transparent and well-run, give priority to the animals, and are no-kill shelters with strong pro-neutering policies. 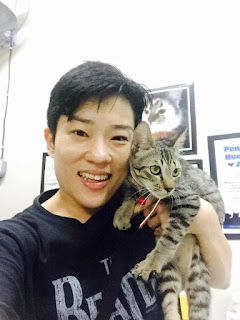 I spent Christmas Eve at the SPCA, administering flea and tick treatment, cleaning ears and eyes and trimming claws. I finished off by handing out treats to the animals and tidying up the Cattery and Education Room.
On Christmas Day, Nicole came to pick me up and we drove to the backwaters of Hulu Langat to the Second Chance Animal Society shelter. It took us a long time to locate the place. 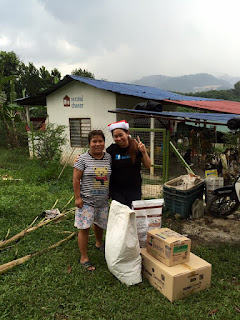 The two shelter staff are ethnic Chins from Myanmar and were hospitable and helpful to us. We got the nice lady to pose with Nic in the above picture. I gave the staff a little cash to buy themselves 'something nice for Christmas' with. 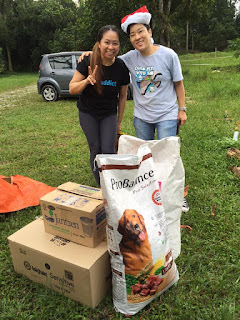 Nicole doesn't do things by half. She bought approximately RM900 worth of dog food for the shelter. 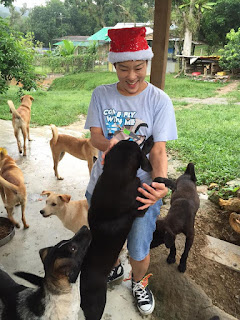 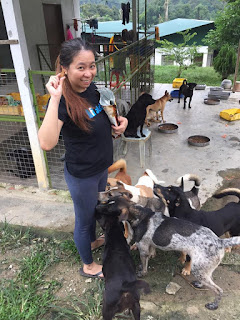 Yes, doggies, we love you too! 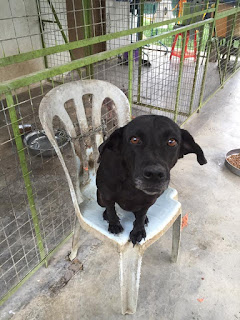 "Hello and welcome to my home!" 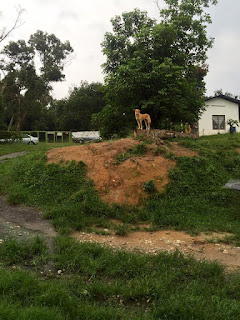 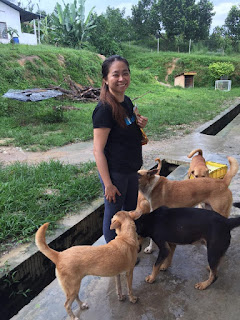 We handed out treats to all the dogs. Thankfully Nicole bought an enormous bag of dog treats and there was enough to go around. 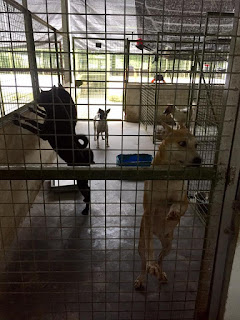 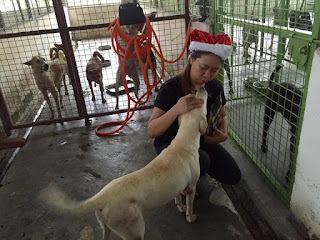 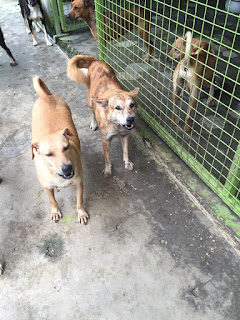 The shelter reminded me a lot of the old SPCA shelter in its layout and physical structure.

Despite the number of dogs and the simplicity of the shelter, the shelter was reasonably clean. There was no pet waste or stagnant puddles on the simple concrete floor. The dogs seem happy and healthy and were not skittish at all.
I am really glad we visited and will work out ways of helping the shelter on a regular basis. 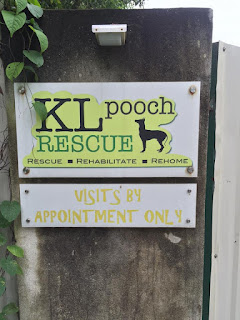 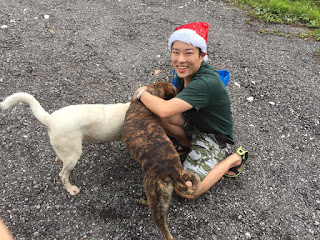 On Boxing Day, I picked Mohala and Greg up from their apartment and made arrangements for Nicole to meet us at the KLPR shelter after her Latin dance class. We were greeted at the gates by three delightful and friendly little dogs. 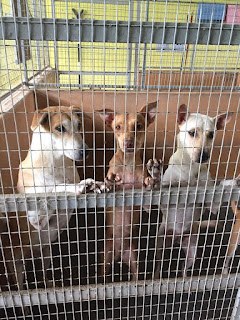 The shelter is clean and well-maintained and you can sense the founders' genuine love for animals. The dogs get to come out and play in the doggie playground and paddling pool daily according to their sections to keep things orderly and manageable, and all the dogs seem active, healthy and happy. 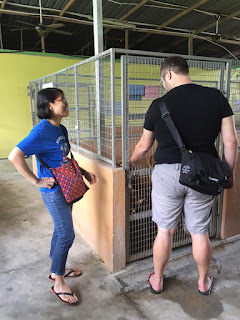 We handed out treats to all the dogs and petted them. 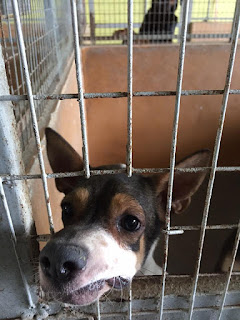 A friendly gorgeous doggie who happens to have a deformed jaw. I think he is stunning. Those eyes! 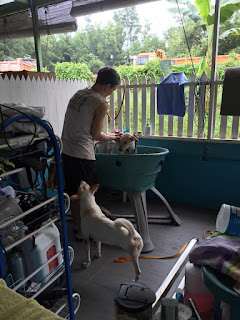 Co-founder Maury giving one of the dogs a bath in their Doggie Salon. 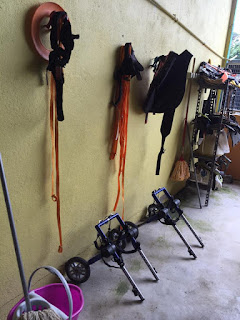 Wheelchairs and harnesses arranged neatly in a row. 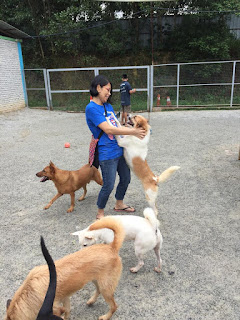 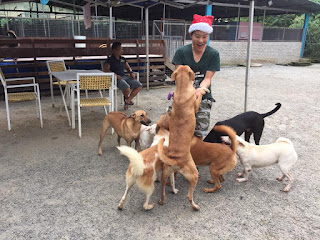 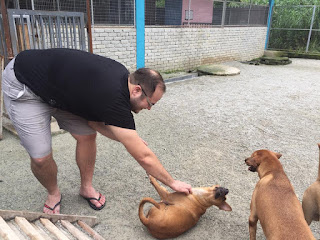 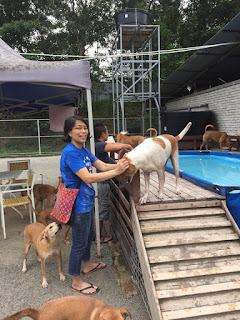 We went into the playground to play with the dogs. I am not sure who had more fun, us or the dogs! 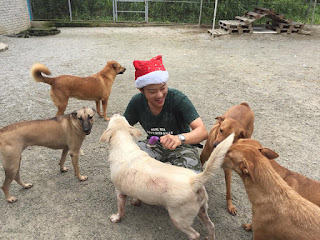 I had the good sense to bring my Furminator with me so I got to brush the dogs. They loved it and crowded around me for more. 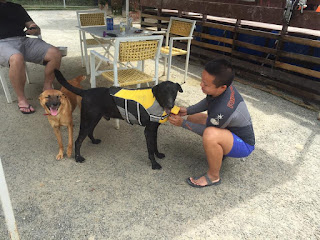 Swimming lessons are about to commence. Look at the expression on the face of the cheeky doggie on the left. 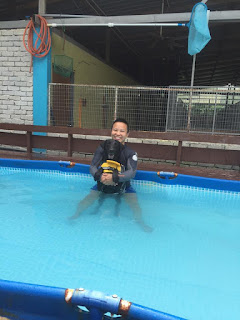 The lifejacket is to stop the dogs from panicking. All dogs are able to swim, after all, but if they haven't got their lifejackets on, they keep trying to swim to the sides of the pool so they could hang on for dear life. KLPR Founder Shannon is really patient with them and the session was a joy to watch. 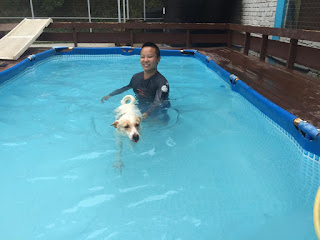 Powder the 3-legged dog showed us how it is done. No lifejacket needed for this little toughie! 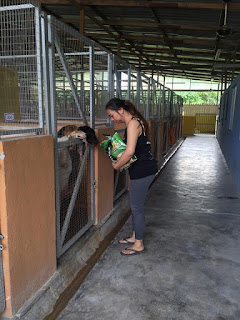 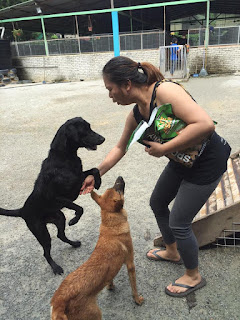 Nic arrived after her dance class and it was time for the second round of Boxing Day treats.
We spent a very lovely day there at the KLPR shelter and each made a donation towards their building fund. We requested to be added to the volunteer chat group in order that we may return as volunteers.
A friend pointed out that while most of our friends in the city went on Christmas mall crawls, I went on an animal shelter crawl. I couldn't think of a better way to spend the long weekend.
To find out more about Second Chance Animal Society and KL Pooch Rescue, please click on the links below:
Second Chance Animal Society
Address: Pekan Batu 14, Hulu Langat, Selangor, Malaysia.
Phone number: 012-919 2263
E-mail: info@2ndchance-kennel.com
Official Facebook page: https://www.facebook.com/pg/scasmalaysia/about/?ref=page_internal
KL Pooch Rescue
Address: 26, 14, Jalan Permaisuri 4/6, Bandar Mahkota Cheras, 43200 Cheras, Selangor, Malaysia   Phone number: +60 16-233 3647
E-mail: admin@klpoochrescue.org
Official website: http://www.klpoochrescue.org/
Official Facebook page: https://www.facebook.com/pg/KLPoochRescue/about/?ref=page_internal
Posted by ~CovertOperations78~ at 14:29