The most human-friendly cat you've ever met is no more. He showed no symptoms of pain or illness. He seemed to have slowed down a fair bit in the last 4-5 days before his death. His appetite had reduced, and he seemed a little more tired and was sleeping more, but that's about it. In his final hours, I gave him multivitamins and supplements and told him we would go to the vet in the morning to see why he seemed so tired. I called him over to me and groomed him with the Furminator. He liked that and purred. I asked him to sleep next to me. He did. Sometime in the night he must have gotten out of bed and curled up on the floor next to me to sleep. I found his lifeless body in the morning. He looked peaceful. There were no cries of pain or signs of discomfort.

I decided he would be my adoptive feline son from the moment I jumped into the drain behind Faber Imperial Court to rescue him over 11 years ago. His front teeth were missing, probably smashed in when he fell into the drain. Following his first vaccination, I learned that he has a weak immune system and some problems with his liver and kidneys. That's when I decided to keep him permanently mine and permanently indoors.
He suffered a number of health scares over the years and I almost lost him to kidney and bladder problems twice and feline herpes virus another time (he lost most of his vision but survived and coped fine and ruled the household for another 3 years). He never lost his fighting spirit or love of people. He was the friendliest, bossiest, most extroverted cat anyone has ever met. He loved playing with cat toys, hogging the cat tower and bossing the other cats around. He was pretty vocal and loud, too.
In my heart, he will always be my forever kitten. I love him and miss him deeply. I hope he enjoyed being my son as much as I enjoyed being his mother. I will grieve but I will also celebrate his extraordinary life. 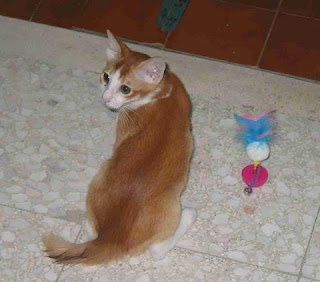 Pix at 3-4 months old, around a month after rescue. 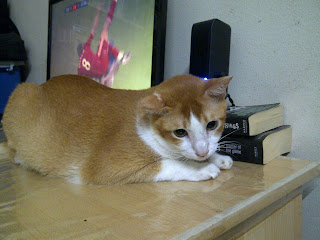 Pix in our old bachelor pad, blocking our view of the game, as usual. 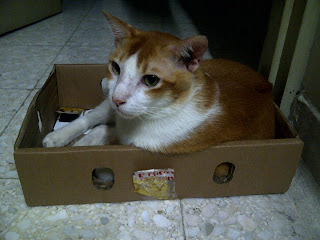 Box Junkie getting his box fix. 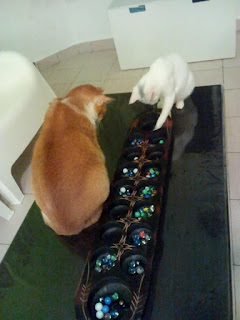 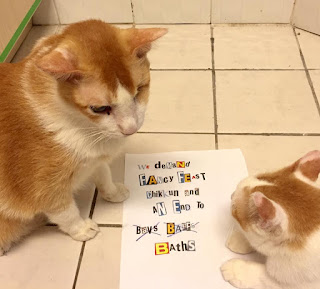 Still a badass even after losing one eye. 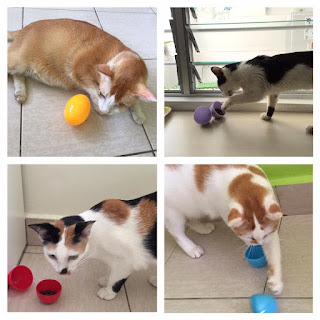 Losing one eye didn't stop him from being able to hunt for treat-filled Easter eggs. I would like to think that I gave my kitties a reasonably interesting and fun life. We celebrated every holiday, birthday and special occasion. ﻿ 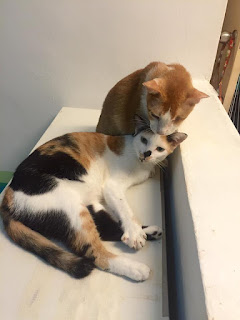 Pix was a friendly and sociable cat who got accustomed to me bringing home new fosters and rescues pretty quickly. Here he is loving on his adoptive sister Thelma.
﻿
Posted by ~CovertOperations78~ at 12:34