When you were first rescued by the SPCA Inspectorate, they didn’t see you as another battered but breathing body that had to be put out of its misery. The vets told us that after the brutal and senseless attack on you, you would never be able to regain your eyesight or the use of your hind leg. It would be better, they had advised us, to euthanise you. Euthanise. What a gentle-sounding euphemism for such a needless deed. Thankfully, the Inspectorate was adamant that their work was to save lives, not to terminate them.

We lost the court case, but we gained YOU. You were our little victory. Our prize. Our ray of sunshine. When you came to live with us in the SPCA Bungalow, you reinforced our determination to protect living beings and to end cruelty against animals. You had no voice and no suffrage, but you were so full of courage, love and trust in those of us who now looked after your needs that it filled us with resolve to improve animal welfare standards in this country.

You became a quick favourite among the Shelter and Bungalow regulars. Your ability to love and trust humans again was astounding, given the unspeakable violence that had been committed against you. You were attacked simply because you were there. You were an easy target. You were fair game. When you came to live with us, we realised instead how easy it is to love you and care for you, and how effortless it was for you to nurture the best in us. I find it hard to reconcile this with the fact that it is widely believed that it is us humans who are endowed with superior reasoning powers.

The SPCA Inspectorate and Marketing/Communications Team were wise enough to know that saving animals wasn’t an either-or situation: We didn’t have to either rehome animals or euthanise them. You weren’t just a rescuee or ward to them or to me. You were, and still are, a friend; a pal; an honorary family member. We derived so much pride from watching you navigate your way around the Bungalow, from the way you made friends with the other cats and dogs and the ecstasy with which you demolished each squeaky toy.

I took especial pride in showing you off to Shelter guests and volunteers. You provided more than a lesson in cruelty against animals. You taught us about unconditional love. You opened the hearts of visitors to animals that were physically less than perfect. During the Christmas Paw-ty that I organised, you may have caused our guests to shed tears of pity, but you had also brought us closer together and touched the hearts of many.

When Meem told me they found your lifeless body in the backyard this morning, I felt a curtain of darkness fall over me. There is now a hole in my heart the size of a little mongrel with sightless eyes. It was to me unfair that you died before we could do more for you. I had wanted to bring you to live with me as soon as I had acquired landed property of my own and made it secure and comfortable for you. We had wanted to bring you to the vets to see if something could be done for your right eye.

Your death left us with so many questions. Did we do enough for you? Could your death have been prevented? As they say, it is now too late for regrets. Angel dear, we hope to do better by you in another lifetime.

Little Angel, you are running free at last. Don’t forget to wait for us at the Rainbow Bridge. Until then, you will live on in our hearts.

Requiescat In Pace, our beloved Angel. 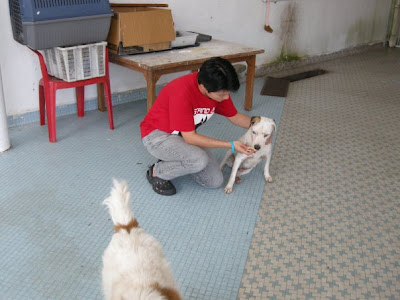 I have never been a dog person, having been attacked a few times as a kid, and allowing fear to mature into apprehension disguised as aversion. But as my best half and the blessed offspring she bore me clamoured for a dog when I returned from Acheh, I endeavoured by clandestine means to keep a dachshund in married quarters with the verbal permission of the commandant who had served alongside me in Acheh, and my neighbour, Lt Kol Rafdzi, who volunteered advice on dog breeds and their respective personalities instead of protesting.

I have never said it to anyone, but after getting Annie, I began to look forward to the awful jam from MINDEF parking lot to guardroom each day getting home. She was terrified of me at first, but we grew to be a team, and we would corner and exterminate rats together. Her courage was evident in the way she would take on rats larger than herself, and after the third kill, we were well choreographed.

If dogs instead of monks were harnessed into missionary work, I believe we would have a lot more lay people serving as apostolates, for the conversion power of these creatures is irresistible even to those hardened of heart as I.

We were forced to put Annie up for adoption when a new commandant came in and raised the askewed shadow of cultural differences in married quarters. Emigration seemed like a good word suddenly, and my hopes for a better society in this my motherland fumed into nothingness. Truly, as Mohandas K Gandhi has said, we are to be judged as a nation in the way we treat our creatures. Where cultural differences rule above reason, and the hospitality of the ruling culture proves wanting perpetually, I believe that said judgement will be grave indeed.

Annie, here's to you. May you usurp the throne of Top Dog in your new home.

I don't believe in heaven or hell - but I do believe in doggie heaven. And I believe that there is where Angel is - along with the doggies who made my life complete: Rufus, Beauty and Quincy and their babies, Zachary, Betsy, and only recently, Selena. So many lovely souls to welcome him and make him feel right at home!

A huge hug for you, dear. Be comforted in the fact that he is free from pain, and indeed, as you say: running free at last.

I don't like pets but the sight of this dog made me so sad that such cruelties had been afflicted upon her.

I'm so sorry to hear your friend died. Angel had a horrible start in life but he must have enjoyed his years with all of you. And hopefully his story will have persuaded some that cruelty is not acceptable, even to so-called "lesser beings".

You're an angel yourself. Shame on on me ...