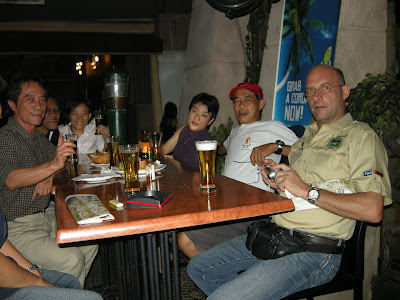 One of my mottos in life that has stood me in good stead is to never turn down an invitation for beer. And so when Luis invited a bunch of us for drinks at the Rainforest Bistro on Friday after work, there was no reason for me to decline.

Despite the fact that there was nothing sylvan or natural about the Rainforest Bistro, the 8 of us – Luis, Wing, Lim, Jeremy, Max, Doc, Zawalan and I – were happy to sit under the artificial plants and gaudy foam parrots and toucans and gaze affectionately at the beer tower on our table, the contents of which were depleted and replenished with astounding regularity. Curly fries, spicy wedges and other scraps of personal Kryptonite vanished off platters and baskets and threatened to send our respective blood pressure counts skyrocketing.

The conversation started off naturally enough in the universal male language of cars and football, but by our third beer tower we were drinking toasts to our friends who had passed away. We drank to Charlie, Thomas and Chris, who we lost in a 4x4 accident and to heart attacks respectively. You know you’ve reached the maudlin stage when you start drinking to all your departed friends. I suppose the ‘buzzed’ stage is when you are hitting on all the waitresses despite knowing that you are middle-aged, balding and beer-bellied.

Must be great to be a man. It would take a fair bit of work to deflate a man’s ego. With men, willful ignorance really is bliss.

The SPCA Inspectorate Meeting had already started when I arrived at the Bungalow at noon, and I was asked in after a short wait so we could discuss the possibility of me going on inspections with the team as a supplementary or assistant Inspector if and when the need arises. Nothing has been confirmed so far and it isn’t anything very urgent in my book, but I will be there for the SPCA Inspectorate when they require my help.

I went down to the Shelter to help Rose and Thean wash the dogs. The place was in chaos. A group of students had come with their teachers to repaint the outside walls of the shelter. I wonder why people find it appropriate to repaint kindergartens, community centres and animal shelters in the most garish of colour combinations. When the Sai Baba Society repainted our walls on New Year’s Day 2008, they made it a violent shade of turquoise, and we ended up with turquoise dogs running around for the subsequent week. This time, this group did a neater job of it and had actually used traffic cones to warn people of wet paint, and plastic sheets to act as barriers. It was just the colour combination that was a bit iffy – it was bright orange with bold red, and it made the shelter look like a Chinese temple. Still, at least it won’t be a challenge for people who want to try to locate the Shelter in the dark now. They just have to look out for the ‘Taoist temple animal shelter’.

Jacinta and I went out to the stalls for lunch and met Rose, Jane and Erica there. There was a stray tomcat scavenging for food under our tables, and he seemed to have quite a bad cold. I picked up the cat, put him over my shoulder and brought him back to the Shelter clinic for treatment. Dr. Pushpa gave him an Ivermec injection and asked me to return the cat to the stalls, and reminded Jacinta to locate the cat and bring him back in ten days for a booster shot. There wasn’t much point in keeping him in our overcrowded shelter because he’s either going to catch something worse, or he might spread his ‘flu to the other cats. Found a heavily pregnant female cat on my way back after returning the sniffly cat, and picked the female cat up so she could give birth safely at the Cattery and be spayed after that. I brought the mother cat round the back to the Cattery and explained the circumstances to Mazni. I made a sign for the mother cat’s cage door, gave her fresh food, water and bedding, and instructed the vets to inform me of the cost after the surgery. 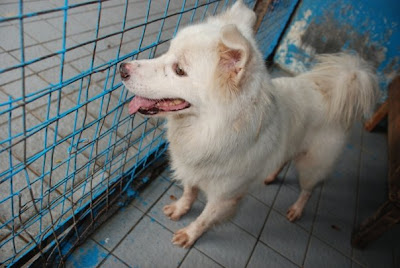 Our adoption rates remain commendable, and since 1st January 2009 we have had 605 surrenders and 223 adoptions, which is pretty amazing by any standards. This is why it is so important for the Shelter to cooperate with the PR/Communications team: There is no point in asking people to come adopt from your Shelter when the place is filthy and the animals are in poor health. When we all work together to improve the living conditions of all animals, everyone wins.

I got the shampoo, Tactik EC and pails ready for washing the dogs after the cat rescues. Most of the other dogs had already been bathed and tick-washed the week before, so Rose and I only had to do the ones in the Sick Bay. Washing Sick Bay dogs are especially time-consuming because the dogs in Sick Bay, though not really sick, are less used to human contact and can be very skittish or aggressive, or both.

As I was washing my 5th dog, 3 boys on a volunteering stint from a nearby college asked me if they could help. Ah! Young ‘uns who are not afraid of hard work! I recruited them to wash the more mild-mannered dogs while I took the risk of washing the more belligerent ones so I could get some exercise prancing nimbly around the angry soapy beasts and dodging their snapping teeth.

The boys were another story. Each time they came anywhere near the male dogs’ nether regions, they would warn one another: “Don’t touch his thing!” “Why not?” Another boy would innocently ask. “Just don’t!” his two confederates would warn, in a near panic. I turned my head so they wouldn’t see my mouth twitch. Yes, why, pray tell? Washing a dog’s nether regions is not going to make you anything other than heterosexual, guys. The dog is not going to press charges against you for molesting him.

The boys stayed for an hour more and I have no complaints about the quality of their work. We finished washing all 22 dogs and I rinsed out the pails and put the shampoo bottles away. Thean, Dr. Lim and The Kindest Man In The World (I learned his real name is Roland) were in the Front Office, so I asked them if they would like to come out for tea. We had a quick tea break at the warong before I went back to the Shelter to resume work.

Reve and I soaped and disinfected the cages and kennels. I scrubbed and cleaned out the Cattery, the cages at the back of the office and the front Reception/Admin area. I finished cleaning the Shelter around 1930h and then showered and changed at the Bungalow before barrelling back to PJ. 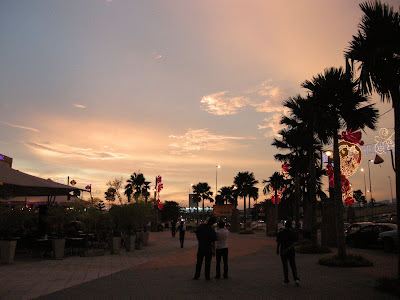 Hello Dearie! What a beautiful entry! Very rajin of you to help so much at the Animal Shelter. Yelaah..orange and red? ooooh!

You're a very matured minded beautiful young lady! Untrue friends can go to Mars and they dont have to come back because Earth dont need them! hahaha

Thanks for dropping by and I'm glad you liked what you saw! Your blog is pretty interesting too!!

The shelter sounds colourful! I'm concerned about being told that the SPCA here turn away people with pets the first time "to think it over" and instruct them to come back a week later. Is that still policy?

Re Ellen: You mean when people turn up to surrender their pets? We don't turn anyone away. We do try to advise them to keep their pets. Most of the people who surrender their pets do so because the pet is old, ill, pregnant or in heat. We advise them on the benefits of vaccination and neutering and teach them how to care for disabled or ailing pets. If they still are adamant about surrendering their pets, we accept the pets anyway, with a punitive fee and a warning against adopting or purchasing any more companion animals in future since they are unwilling to be responsible care providers.

I concur with your motto. Popping out for a beer (or my preference, cider) should never be turned aside from. The artmosphere you described reminded me of the days when life in any air force Officers' Mess was merrier than at the Green Dragon. Alas, now, you could find more spirit in a graveyard. And whilst I embody several of the physical ingredients of being in the 'buzzed' state, I have absolutely never hit on the waitresses. Maybe it's because I have never gone drinking with foam toucans who would egg me on to that which is humiliating. Good on you for living it up!!!