Democracy isn’t alive and well in Malaysia after all. I had been needlessly optimistic. The Star, 6th February 2009

The Sultan has ordered the Perak Menteri Besar and his state executive council to step down, rather than dissolve the state government and call for a re-election. This is the first time in my life that I am persuaded that a constitutional monarchy would be an obstacle to democracy. My country is descending into a Ruritania of sorts, with its high drama, political intrigue, deep social divisions and power struggles that should never have occurred.

Two wrongs could never make a right. You do not bribe the already corrupt and then present him to us as our elected representative. That is an outrage. The only right, just and honorable thing to do is to dissolve the state government and call for a re-election, and let the people decide. But as you can see, the gentlemen of the ruling coalition could not even muster the moral courage to do that.

”When two elephants fight, the mousedeer in between them is trampled to death.” – Old Malay Proverb. 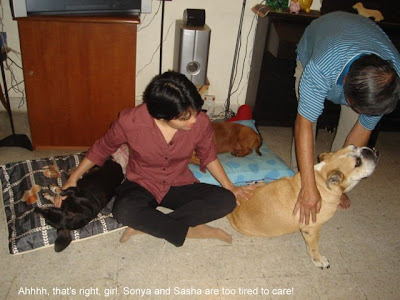 With Pat’s furgirls, Sonya, Sasha and Missy. Chuan is trying to get Missy to sit down and hold still for the photo. Photo taken by Pat and nicked from her blog. 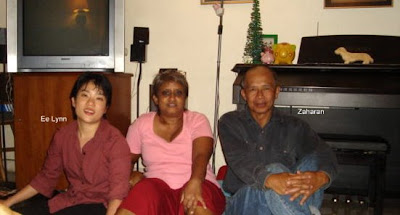 Blogpost Buddies meet in real life: me, Patricia and Zaharan. Photo taken by Chuan and nicked from Pat’s blog.

I started my Blogspot blog in December 2007 as a public blog for the benefit of friends in Malaysia. Through Blogspot, I had the good fortune of making the acquaintance of 2 very special people, Patricia and Zaharan. We became good friends within weeks and could always count on each other for a kind word and cheering comment even when the Malaysian political situation seemed bleak.

Zaharan and I had the privilege of being invited to Pat’s house for tea on Friday, 6th Feb. Due to the unrelenting rain, Zaharan, whose main mode of conveyance is by motorcycle, had initially opted out of the meet-up, but being the stubborn creature that I am, I insisted on driving into the boondocks of Puchong Permai to locate him and pick him up, despite the fact that it had been raining like it was to be the next Great Flood and my El Cheapo Cracker Jack cellular phone decided to give up the ghost when I was trying to confirm his coordinates.

We finally got to the lovely residence of Pat and her husband Chuan sometime after 2200h, and they were gracious enough to serve us a scrumptlicious meal despite the fact that we had arrived absurdly late. Pat’s dear Mum greeted us warmly and her dogs went wild with excitement when they realized that they now have two more people to play with.

We had a long chat during the very gratifying and lovingly prepared meal of spaghetti, sandwiches, chocolate-and-marshmallow cake and apple-and-cinnamon scones. It was absolutely super of Pat and Chuan to have us over, and I hope I will be welcome to come over again sometime to play with the furgirls!

I deposited Zaharan back at the fuel station where his bike was parked sometime after midnight, drove back to the BOQ and spent the rest of the night in fascinated glee watching the Rowdies demolish the scones that Pat had sent me home with. Did you know that cats like apple and cinnamon scones? Well, now you do! Mad Props to Pat and everyone at her English Cottage!

Due to some unforeseen circumstances, my plans to drive up to Magick River for a swim went kibosh, and so I decided to make the most of the day by going skating at Sunway Pyramid instead after having done the housework and fed the Rowdies.

The rink was crowded so I went up to the piazza to take photos of the Sunway Lagoon theme park, which I last visited in 1993. I wouldn’t mind checking out the amusement park and water park again, although some of my friends in the Malaysian Nature Society object to the fact that they have wildlife in captivity in their petting zoo. There must be a better way of engaging corporations than just ostracising them. 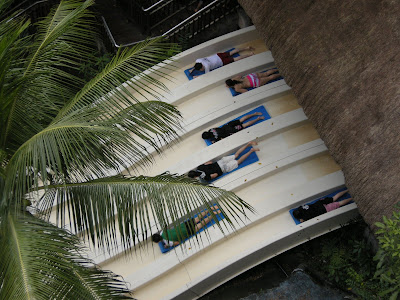 Water slides – Race you to the bottom! 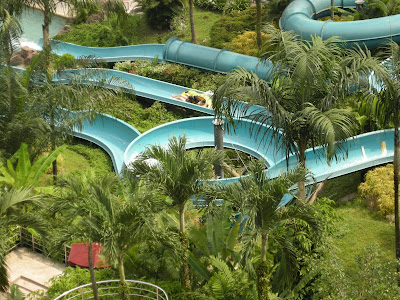 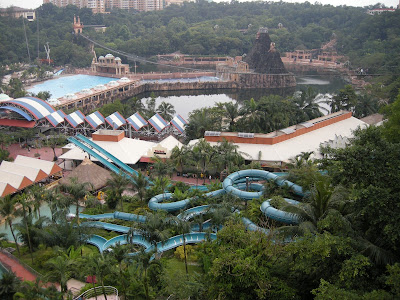 Aerial view of the Sunway Lagoon Theme Park. Anyone else keen for an afternoon of manufactured fun? Gotta love that huge-ass suspension bridge!

The Selangor State Government and local authorities were holding a Chinese New Year open house celebration at the open air car park next to Sunway Pyramid, so despite the fact that I was supposed to join my 4x4-loving confederates at Jeep Club Jeremy’s house later in the evening for a Chinese New Year dinner party, I decided to stay on at the open house to meet my elected representatives. I waited at the entrance for our embattled Menteri Besar Tan Sri Dato’ Khalid Ibrahim to arrive so I could shake his hand. And shake his hand we did. I let him know that he has our support and that we were glad to see him there, beleaguered with false accusations as he is. We shook hands and exchanged words of support and encouragement with the state assemblymen as well and thanked them for all the improvements they have made to their respective constituencies. 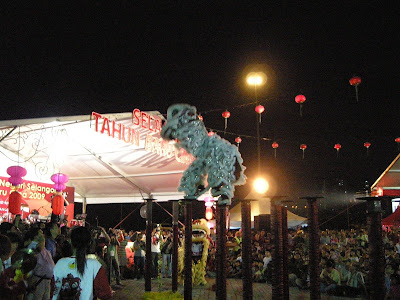 A very skilful and acrobatic lion dance performance by teenagers of different ethnicities. 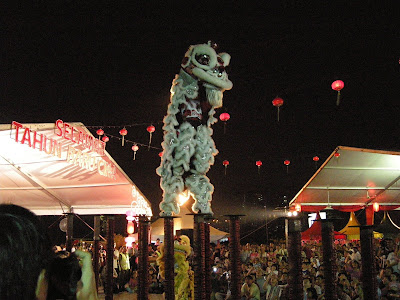 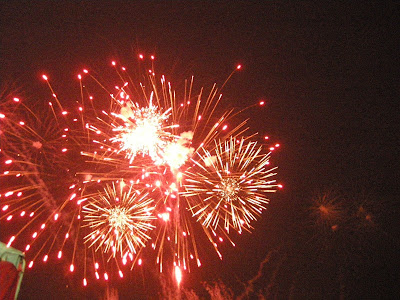 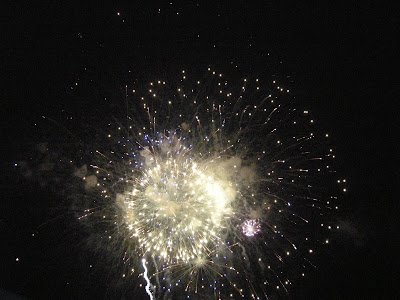 Pyrotechnics for the enjoyment of a large number of people is far less harmful to the environment and less offensive to public order than the setting off of firecrackers at ungodly hours by an antisocial few.

I noticed that the food was served in disposable/biodegradable starch tableware, and not Styrofoam products, and I know we have our Subang Jaya state assemblywoman Hannah Yeoh to thank for it. This is just another instance of a small yet meaningful difference made by one individual who was accorded power in a responsible and democratic manner.

I realised today that the economic recession could work both ways for the SPCA animal shelter. So far, we have not seen a sharp increase in the number of animal surrenders, and I can attribute this to 2 reasons:
(i) People can opt to switch to cheaper or generic pet products to cut down on pet care expenses, rather than give up their beloved animal companions entirely;
(ii) Thanks to the SPCA’s ongoing Early Spay and Neuter campaigns, many people have had their companion animals neutered, or plan to rely on neutering, to bring down the pet population and thus avoid the cost of unwanted pregnancies and caring for extra animals.

So far, we have had 545 recorded surrenders this year and a whopping 191 adoptions, which is a cause for celebration in itself. I speculate that the economic recession hasn’t stopped people from wanting companion animals, but it may have changed people’s minds about purchasing from pet stores, and adopting from shelters and pounds instead, especially since the SPCA’s adoption fee covers vaccination, deworming and neutering.

We have also seen an increase in institutionalised volunteer groups in the past month. If the way corporations and institutions choose to give back to society in a difficult and uncertain economic climate is by encouraging or requiring their people to volunteer, then I think it is a very commendable trend that should be sustained.

Together with Thean and Rose, I supervised the volunteers who were there on Sunday to help wash the dogs and clean the kennels and catteries. I handled the dogs in Kennels D, E and F. Together with 8-10 volunteers, we managed to wash all the healthy dogs in the SPCA and give them tick baths. Some of the girls who came to volunteer also helped me soap, disinfect and rinse the kennels and enclosures, and I thanked them for their help. I told them earnestly that their good work changes animal lives permanently, and that if an animal gets adopted today or the day after, it would be because of the effort they put into making the animals and shelter clean and healthy. The girls flushed with pride and pledged to come and volunteer again soon.

A very large family came to adopt a very small puppy, which was scheduled to be euthanized the next day if not fostered or adopted immediately because she was badly infested with ticks. I took the puppy into the surgery, saturated her fur with Frontline, and picked all the ticks out of her skin and the inside of her ears using a pair of tweezers. I then advised the family on how to care for their new puppy, and the correct anti-parasite solutions to administer.

I finished cleaning the shelter and went up to the SPCA Bungalow to shower by 1800h, as I had tickets to watch the WMTC KL International Muay Thai Challenge at the Cheras Badminton Stadium. And it was such an exciting and novel experience for me that I shall have to write a separate blog entry on it.

Yes, please come again. If my girls could speak, they'd say that too :)

We enjoyed having you over, both me and Chuan - and I tabik your determination to brave the Puchong jam, and the late, late hour and drag Zar to dinner!

How is that little tot doing? Should be fine, with Frontline, ya?

Thanks soooo much, Pat! Yes, I think the tiny tot is going to be fine. Adopters can bring adoptees back to the SPCA clinic for free treatment within the 1st month of adoption (over and above vaccination, booster and neutering), so if the pup isn't doing as well as they hoped, there's always a 99% chance we'll see him back at the clinic for treatment. I guess that's why people are choosing shelter animals over pet store ones now. Pet stores don't provide after-sales service!

I see you've been to my sister-in-law's.

As an ex-bantam weight, I can attest to the absolute necessity of the jock-strap or what we in RMC called the "ball-guard". In the heat of close-quarter battle, and target selection by way of peripheral vision rather than give the game away by gazing through cross-hairs, the intended point of impact may be subject to parallax errors and ensuing pain where the attacking limb did not intend to injure.

And is there any way to hire the band to sing the new and improved Clapton's Freudian Slip: What A Fool Tonight for the love of my life on St Valentine's? Might add a spark to the relationship--the incendiary kind.

"New and improved"?!? Pshaw! Major, please be prepared to sleep on the couch tomorrow night! The wife's not going to be very flattered or amused!