Battle of the Nak Muays 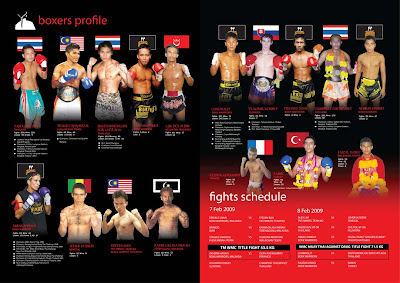 The Fight Sheet, reproduced from boxxtomoi.blogspot.com without permission but in accordance with the principles of fair use.

It would never have occurred to me to attend the TM-World Muay Thai Council Kuala Lumpur International Muay Thai Challenge 2009 if not for the gentle exhortations of my Blogspot buddy, Zawi. I have always been a fan of all martial arts forms, and I think Muay Thai, although arguably the most difficult to learn, is the martial art with the greatest practical and ‘street’ value.

Let me reiterate that there is nothing violent about Muay Thai and other combat sports. Like all sports, Muay Thai has the capacity to cause injury and death even to the most skilful participant. However, to me, there is nothing violent about a sport where the contestants undergo stringent health checks and are informed and skilled adults/young persons who have undergone rigorous training and understand the risks they are taking. In my humble opinion, rodeos, deer hunting, bullfighting, dogfighting and pig wrestling are violent sports. The animals have no say in the matter and are not willing contestants in the 'sport'. It is fun for the spectator but spells death or lifelong injury for the uncomprehending and frightened animal. That is violence. Skilled fighters signing up to compete in a tournament is a valid sport and a glorious art form.

And so I made my way to the event venue from the SPCA Bungalow after a full day of volunteering. I had booked tickets for myself and 9 others, and the 10 of us were to meet up at the Cheras Badminton Stadium. The event organiser, Muss, had upgraded our tickets from terrace seats to ringside seats, because, according to him, he liked me. w00t!

My departmental secretary Ainul arrived with her brother Joe and their friends, and Nicole and Glyn (i.e. Glycol!) arrived at the Stadium after their SPCA Outreach duties in Shah Alam. It was at the ringside seats that I finally got to meet Zawi, who was to take photographs and render a write-up of the event for the Boxxtomoi Magazine. 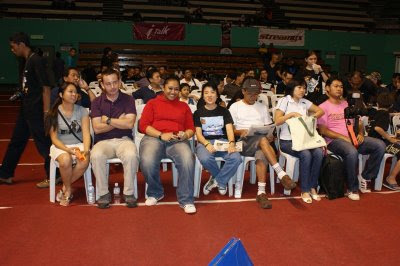 From left to right: Nicole, Glyn, Ainul and me. Mad Props to Zawi for taking this photo and allowing me to have it!

The pre-match entertainment was frightful. A geriatric band that sounded as though they had inadvertently left their dentures at home took the stage and sang rock and roll numbers. What they lacked in talent, they made up for in volume. They were just screaming unintelligible lyrics at us. At first I thought that they were singing in Bahasa Indonesia to the tune of Chuck Berry’s “Lucille”. Later I realised that they were indeed singing in English. My gang and I doubled up laughing as the band warbled an Eric Clapton staple: “My dolling, you look What A Fool toniiiight!”


Once the match started, however, we realised that our view of the ring was blocked by photographers and the nak muay’s cornermen. We ran up the stairs to the terrace, where the view was unobstructed. For the rest of the night, we were inveterate nomads, moving from one location to another that could offer a better view. 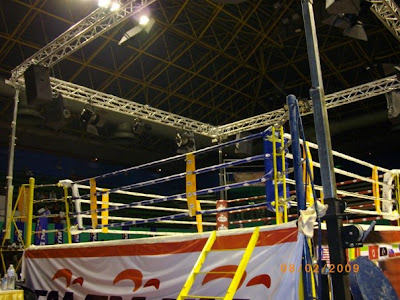 A view of the boxing ring taken from our ringside seats before the match. Photo taken by Glyn.

I remembered going through the fight schedule so that we could have dibs over the fighters of our choice. Some of the nak muay’s fightfaces couldn’t scare a newborn rabbit.

The first fighter, for instance, Alex Lim, was all toothy grins and looked like someone I went to school with, and that’s not intended to be a compliment. I can’t think of anyone that I went to school with who could do battle with someone who was bound, gagged and wrapped up in a bin liner. Unsurprisingly, Alex fought 5 rounds with Joher Hussein of Senegal and lost on points. 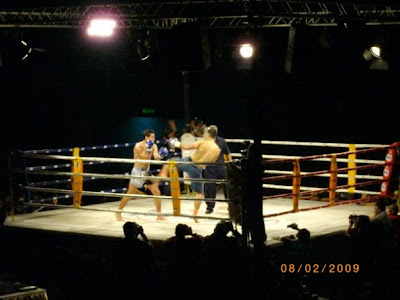 (I found out later that Alex broke a bone in his left forearm but continued with the fight nevertheless. It happened in Round 2. Oops. Sorry, mate.)

During the break, Nicole and I had an argument over whether wearing a jockstrap was a requirement.

“They’d have to”, I argued. “Look! Almost all of them get hit at least once in the groin in each round. A few more kicks like that and it’s bye-bye, birdie. They wouldn’t have a next generation of nak muays after that.”

“Maybe only for this competition,” countered Nicole. “The ones in the Thai villages are so experienced and so tough that they don’t need jockstraps. Maybe a jockstrap would restrict their movement. They are tough because they practice kicking and striking banana plants until they don’t feel pain anymore.”

I don’t see how being ‘tough and experienced’ has anything to do with not needing a jockstrap. Kicking a banana trunk increases one’s pain threshold in one’s limbs, not in one’s Crown Jewels. There wasn’t any exercise you could do to not feel pain there.

The second fight was between Aik Salsaloon of Thailand and Che Pol M150 of Malaysia. Che Pol fought stylishly and well, and won the fight, also on points. We were by now itching for a K.O. and the third fight between Falicit Sor Pekdam of Thailand and Awie M150 of Malaysia did not disappoint. Falicit went down in Round 2 and failed to get up within ten seconds. Awie ran around the ring pumping his fists in the air while we cheered and pumped our fists in reciprocity. 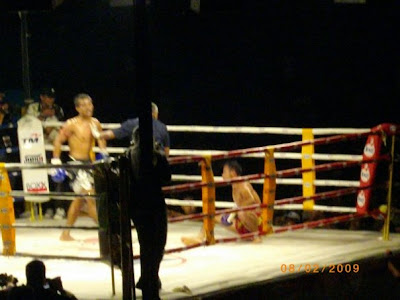 I had been looking forward to the match between Abbas Ahmadi of Boxx Warriors Malaysia and the hitherto undefeated Faizal Ramli of Malaysian Tigers. The match was an anticlimax. The 2 nak muays merely glared balefully at each other, skipped around a bit and jiggled their knees for all of Round 1. The audience turned ugly and edgy. Jeers reverberated around the Stadium. It looked like some of those in the front row were on the verge of throwing their plastic chairs into the ring just to stir things up.

“I am going hoooome!” I howled at the fighters, hands around my mouth like a megaphone. “To sleep! And the two of you can settle it by rock-paper-scissors!” Patience is not my strong point.

My friend Ainul was laughing her head off. “Maybe he (Faizal) is undefeated because he never had to fight,” she hypothesized, “maybe all he had to do was skip about, looking aggressive, and wait for the other guy to go down.”

In the end, Faizal did win the match on points. Abbas didn’t look as though he was trying at all.

(It transpired later that Abbas had been unwell and was still having a bad cough right before the match. Double Oops. Sorry, mate.)

The penultimate match was between my fighter of choice, Chaowalit of Boxx Warriors Malaysia, against Seethanonchai Sor Chitlada of Thailand. The body and head blows were really getting to Seethanonchai. In Round 2, Chaowalit delivered a hard, direct kick to the chest of Seethanonchai. Seethanonchai looked winded but remained standing. He shook his head. “No”. No? No! He couldn’t go on. He was holding his shoulder in pain. The kick had dislocated his shoulder. His cornerman threw in the towel and the judges called for a Technical Knock Out because he was in no state to continue. Chaowalit, good sport that he is, looked in on Seethanonchai to make sure that he was okay, before he celebrated the fact that he had won the fight. We clapped and cheered along with him.

In the final match, 19-year-old nak muay Fauzan Zabidi of Boxx Warriors was outclassed by his more experienced opponent, Mathias Galocassarino of Italy, and the judges had to declare a Technical Knock Out when Fauzan fell 3 times in Round 3.

And so my first experience of watching a live Muay Thai tournament came to an end. I thought it was very well-organised and that the fighters were very fit and competent. Ainul, bloodthirsty wench that she is, had actually expected more aggression, more K.O.s and more serious injuries. Nicole and Glyn had to leave by 2300 hrs but found it all very awesome and inspiring and could not wait to watch the next fight that comes to town.

Nicole did ask me if I would be interested in signing up for Muay Thai classes at Jalan Memanda, near the SPCA. I thought about Alex’s broken forearm. I thought about Seethanonchai’s dislocated shoulder. I thought about all the blows the fighters received to the head. One blow to the head like that, and I’d never be able to draft an academic paper again.

I shook my head and declined Nicole’s proposal. Naaaah. I’d stick with Sudoku.

Hooi!! Had a boisterous night out eh?
Hope you were not the loudest cheering and clapping! Aisay!! Mesti try to be very lady-like lor? But I bet that night you were a muay thai fighter running round the ringside with Ainul right?? hehehe
Boleh imagine you laah!hahaha

wow,,,you can stand such violence !
I stopped watching such fight after one of the fighter got killed in the ring.
nowadays, such sport should be banned.
no matter how hard the fighters are trained, they get badly hurt after each fight.
I was a fighter once, now am half blind, after a fight in the ring.

CO'78,
Been waiting for this post from you. How could I miss it until today?
Now I have to throw my towel and ask Mussadik of Boxxtomoi Muay Thai Magazine to use your article instead. To good to be left in the blog alone.
I will post my pictures tomorrow as I have managed to recuperate enough to start serious blogging again.
You can use some of my pictures in my post tomorrow if it is going to be of any use to you.

no story about me giving you a discount? haha..

really hope you enjoy our show.

Haha...love ur post! It totally helps lift my spirits for missing the event. Girl, u can really write! They are rather few people who can write such descriptive writing and tickle me to the bone and u r one of them!

Re Mamasita: Yeppers, I can be really loud and boisterous when the occasion presents itself!

Re Anonymous: Guess you didn't read my second para on violence and contact sports. Ah well. Different strokes for different folks. If you are not so inclined, you don't have to watch it or participate in it. It's not an imperative. I am sorry you lost part of your eyesight, though. My sympathies.

Re Abang Zawi: Thank you for your kind praise, but I hardly think my blogpost can be made suitably public! The rock and roll band, Alex Lim, Abbas Ahmadi and Faizal Ramli would all be after my blood!

Re Boxxtomoi: Sorry Abang Mus, I should have mentioned that we received a special rate AND a seating upgrade! Thank you so much! Mad Props to you and all at Boxxtomoi!

Re Calin: Thank you for your kind words. Am sorry you had to miss the event.

Ee Lynn,
Uploaded most of the relevant pictures of the event in my latest. Take whatever you want as what is mine is yourse hehehehe.

Re Ellen: That's true! Cats wrestle, box and do yoga better than people do!

HMM ... this fight post has swung the turnstyle your way ... grats. Great write.