Judging by the turnout at the first of the Malaysian Nature Society (Selangor Branch) talks for the current administrative year, it’s going to be a great year for science and conservation-based talks. The audience occupied every seat in the Rimba Ilmu Auditorium and spilled out into the aisles. I didn’t know that there would be so much interest in the Late Quaternary Mammals of Borneo! I almost thought that I was in the presence of a rock star! 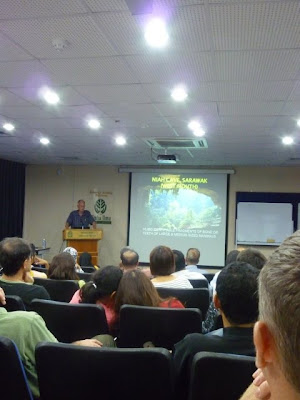 Lord Cranbrook outlined the evidence of changes in the mammalian fauna of Borneo during the Quaternary, which was a period of very variable climate dominated by cyclic Ice Ages. The main information comes from archaeological work in the caves of Sabah and Sarawak, notably the huge cave at Niah.

Lord Cranbrook's first appointment was at the Sarawak Museum in 1956. After a short period on a post-doctorate fellowship in Indonesia, he joined the Department of Zoology, University of Malaya (1961-70). He was associated with the Royal Geographical Society Expeditions to Kinabalu (1964) and Vanuatu (as Deputy Leader, 1971), and the joint expeditions to Mulu (as Deputy Leader, 1977-78) and to Belalong in Brunei (as Joint Leader 1989-94). He has published many books on Southeast Asian wildlife, including Mammals of Borneo (1965), Birds of the Malay Penninsula Vol 5 (jointly authored, 1976), Belalong: a tropical rainforest (jointly authored, 1994) and Swiftlets of Borneo (2002). In recognition of his services to the State of Sarawak, Lord Cranbrook was awarded the titles of JBS (Hon) in 1997 & PNBS (Hon) in 2005 (the latter carrying the title Datuk Seri); he was recently (May 2006) elected an Honorary Fellow of the Linnean Society of London. He is an Honorary Life Member of MNS. 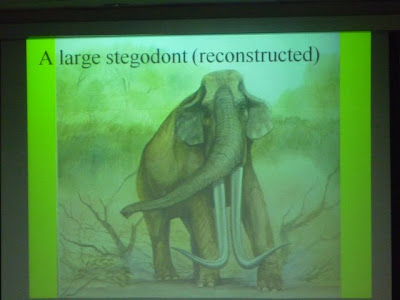 So what’s a Late Quaternary Mammal when it’s at home, if you please? Why, Ice Age Mammals, of course! Stegodonts such as this handsome fellow here walked the plains of Borneo in the Quaternary Period.

The talk covered topics such as:
- Mammals as environmental indicators
- Origins of mammal remains in cave sites
- The Borneo Anomaly – Quaternary Climate Change
- Past fauna and past environments

What else is waiting to be discovered in the limestone caves of Borneo? The plot thickens!

Many thanks to Committee Members Ilyas and Cindy for organising such a successful talk, and of course, to Lord Cranbrook, for being so obliging despite his hectic schedule!

I spent Saturday back at the parental home, cleaning the house, spring cleaning the kitchen cabinets, giving Amber and Chocky their baths and walks, taking apart and scrubbing the garden fountain and generally making myself useful. I have been very busy with a few year-end projects for needy families and underprivileged children, and I am grateful for my parents’ support and understanding. I think they have come to terms with the fact that they will never have a ‘normal’ daughter, and that my personality is such that all my time and energy will be spent on service, and they have responded by giving and sharing whatever they could afford.

I woke up on Sunday morning to find that the Battletank had two flat tyres. Major Bummer! This must have occurred at the Templer Park landslide area on my drive back to the parental home on Friday night! It took me over an hour to change the tyres and get them repaired at the Michelin shop in town. It disrupted my plans to be at the SPCA as early as possible to help out while the weather remains fine.

I arrived at the SPCA animal shelter ravenous after my morning exertion. I went to the warong across the street for a late breakfast and was pleased and surprised to bump into Saya a.k.a. Tashkent Blues there having an early lunch with her delightful girls.

Hurried back to the SPCA after breakfast and proceeded to get the things ready to bathe and tickwash the Sick Bay dogs with. There were two teenage volunteers around, 14-year-old Rachel (i.e. Rugrat Rachel, not to be confused with Dysfunctional Divorcee Rachel) and her friend, Diego, an exchange student from Argentina. Both youngsters are highly reliable and helpful, and have been volunteering faithfully every weekend in the past few weeks. I engaged their help in helping me shampoo and rinse the dogs. It was good to see youngsters who are not afraid of hard work. They even sang as they worked. Diego was amazing with the dogs. I wish he were my son. (Proviso: I have reached that point in my life where everyone seems less than half my age, and that is okay).

I roped and leashed each dog and coaxed them gently into coming with me to the bathing area. The youngsters washed them clean, while I applied tickwash and Tactik EC spray to destroy parasites. Another young lady came up to us, peered over the gate and asked if she may help. I opened the gate, welcomed her and let her jump right in. We worked together companionably, singing or whistling and uttering sweet nothings to the forgotten and neglected dogs of Sick Bay.

We finished washing over 20 dogs and the young volunteers moved on to help Rose and Reve with some other duties, while I put the washing things away, tidied up, showered and got ready for a party I was to assist with.

My favourite small person, Cerys, turned 3 last week and her parents planned a party for her at Palate Palette restaurant, as it is managed by their friends. I was only too happy to help with the planning, and offered to do the face-painting and eco-conscious games for the toddlers. Our guests would mostly be from the 2-6 age range, and it would be fun to see what lessons we could teach to toddlers. 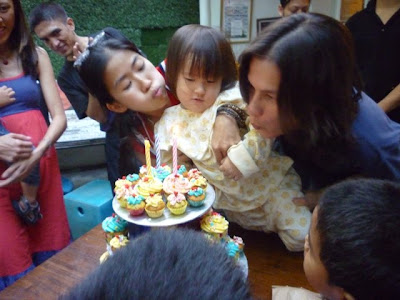 Cerys blows out 3 candles on her cupcake tower. 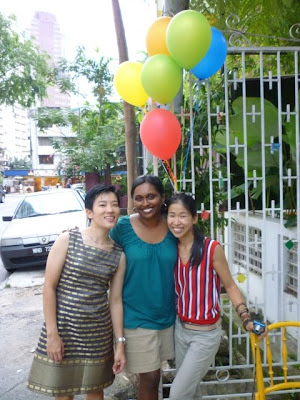 The Birthday Committee: Me, Loretta and Cindy. 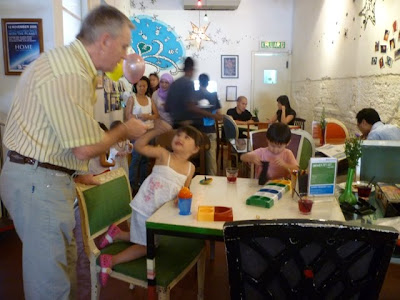 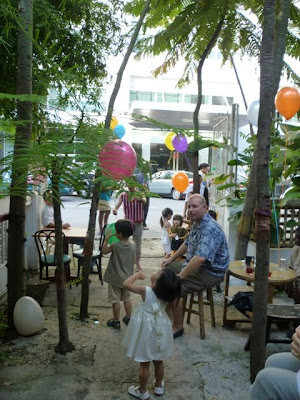 Outdoor dining for tots and parents. 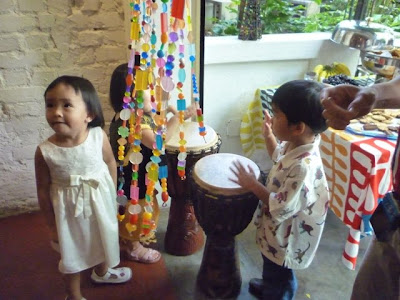 Mian Ying plays with the glass bead curtain while Imran has a go on the hand drums. 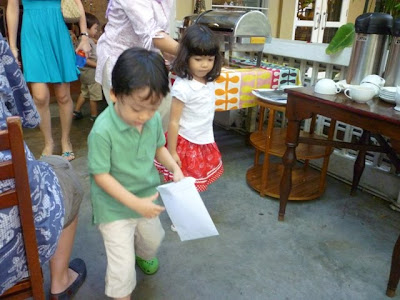 Sticker Hunt, hurray! Look at those professional-looking used envelopes – those were my idea, to encourage reuse and to reduce consumption of paper products. 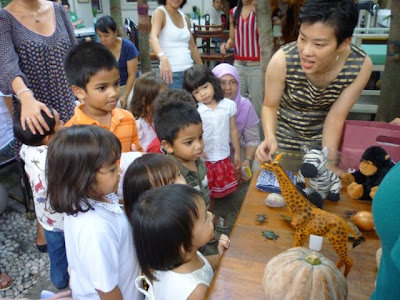 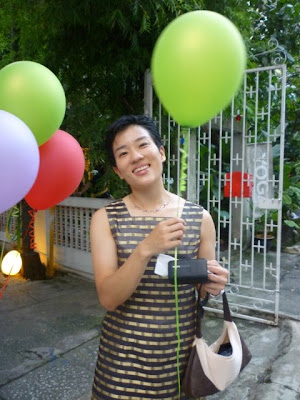 A green balloon for me to take home to my cats! Not very eco-friendly, but they were sponsored by a guest, and no, we won’t release or landfill them!

I'd like to give a big shoutout to Cindy and Teckwyn for having me and all those who helped to make little Cerys' birthday so very special. Thank you, all!

I had a lovely and productive Sunday, which is proof that not even two flat tyres can get your spirits down if you make up your mind to make the most of your day.

By the way, I have two new posts in my Savoir Vivre KL Blog!

Please vote for me! Please copy and paste the URL if the voting button doesn’t work:

Thank you for your kind visits! Please leave a comment if you have the time. I’d love to hear from you.
Posted by ~CovertOperations78~ at 22:27

Hahahaha! I need to say that, too: Ee Lynn in a dress!!! First time, for me! You look hhhhhhhhhhot!

HellOH! I have lots of dresses, oh-kay? ;o) Gee, after I went through all that trouble changing tyres, washing dogs and planning a party, the only comments I get are on the dress? ;o)

HAHAHAHAH! Sorry lah, E! That's what stood out most for me. I loved reading about your week, and the tiny tot party :)

CO78,
Don't-lah marah! I also mention elephants lor! or rather stegodonts...heheheh...
Wah, your combatant vehicle pakai Michelin? My Mama's car original tyres were Michelin too but after a while, they become hard and cracking due to underuse! Mama prefers to walk to walk, so less CO2 released to the environment, right? So she changed them (the tyres) to the softer type. The tyre shop actually accepted the Michelins as trade-ins. purrr....meow!

My dear E.Lynn..you look like a beauty queen..you must wear dresses more! Gone is the tomboyish look..you look so very pretty my dear!Very cantik and sassy!!

Dear Kitties in Sydney and Pat,
Hee hee! Tak marah, tak marah. Kidding too. Thank you for the compliments!

My Battletank wears Alpina tyres. It's just that the Michelin shop was the only one open on a Sunday morning. You know lah, these Chinese fellas work 24/7. They repaired both tyres for only RM10. Hurray!

Thank you dear Datin Mamasita for your visit and kind words. Aiyo, there's a time and place for everything, lah. Tomboy look still 90% of the time.

I was going to say that too: you in a dress? What happened to the jeans? Stuck in the laundry after being full of elephant pooh?

Re your shoe box Christmas. Is Dec 15th OK?

Dear Ellen,
My jeans went on vacation for the entire day and didn't tell me about it, so I was stuck with a dress and pretty sandals.

Dec 15 is fine, thank you! I am expanding the circle of beneficiaries cos my friends have all been amazingly generous. I am now also giving goodie shoeboxes to the kids of Chow Kit and those from impoverished families in Sentul and Setapak. Will come collect from you when you're ready!

These articles are fantastic; the information you show us is interesting for everybody and is really good written. It’s just great!! Do you want to know something more? Read it...: Great investment opportunity in Costa Rica