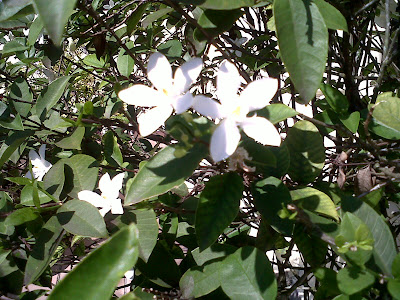 "Death is beautiful when seen to be a law, and not an accident - It is as common as life."
~Henry David Thoreau

My aunt went into a coma last Thursday night and passed away the day after, on Friday evening.

In retrospect, death was probably a release for her. Her quality of life has deteriorated since she had a stroke 7 years ago. She developed diabetes and other health complications after that.

In the disorder that followed her demise, and due to a combination of biological, pseudo-religious and astrological factors, I was advised by my parents not to accompany them for the funeral in Penang, but to hold fort at home to look after our canine children.

My aunt's family and mine have never been close. Although my father and my aunt were siblings, we lived worlds apart. My aunt never took a genuine interest in our lives, but I remember her as being unfailingly warm and jolly whenever we visited. She was a good cook and was not particularly watchful of her diet. She loved children, and was lenient with her own to a fault. My cousins left school young and got married early in life. They held many of the beliefs and mental attitudes of those from the Chinese heartland and our values must have appeared rather quaint and incredible to them. My aunt was lucky to be blessed with a great many grandchildren when she was alive, and her children lived close by, so she was never lonely. She was only 64 when she died.

A relationship doesn't end with death. She will always be my aunt, and Covert Dad's sister. Love is stronger than death, and our memories of my aunt will always be filled with love and will survive her death.

It was a quiet weekend for me spring-cleaning the parental home on my own with Amber and Chocky for company. 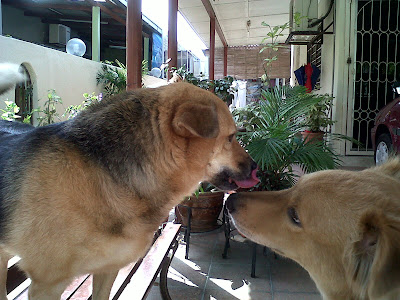 Amber and Chocky being loving to each other.

I had contemplated participating in a post-Thaipusam clean-up campaign at the Batu Caves temple complex with my friends from the Facebook group I joined, Sampah Masyarakat (literal translation: Community Rubbish), but there were too many things to do at the parental home and I only left for the SPCA at midmorning on Sunday. 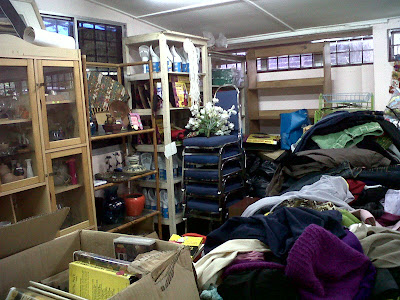 Tail-end of the Jumble Sale: Our Charity Shop in a mess.

The SPCA had a Jumble Sale in the morning and the booths were manned by volunteers from nearby schools. We managed to raise a small sum of money from the sale. Some of the unsold items were returned to the Charity Shop, as shown above, but most of it (clothes, toys and household goods) was loaded onto our animal pick-up truck and delivered to the migrant worker and refugee communities by Samy, our driver. 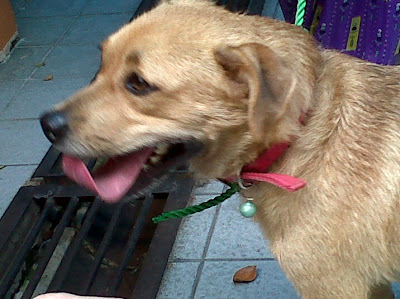 One of the best things about the SPCA Jumble Sale is that a well-publicised event always attracts animal lovers, i.e. potential volunteers and adopters. We always get a spike in adoptions after every Jumble Sale. Jack-Jack here was adopted by a loving family who has previously adopted from the SPCA as well. 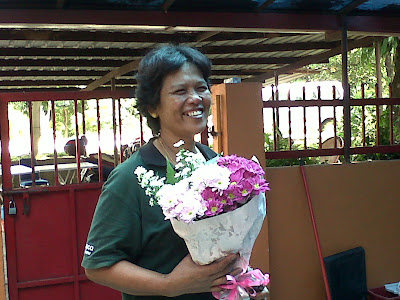 A bouquet of flowers, though short-lived, is always appreciated.

It was our shelter worker Kak Mazni's birthday, and we decided to honour her with a small private celebration in the shelter office. Reve got her a cake, I got her chocolates and Reve and Shahrul got her a bunch of flowers. I'm not entirely sure why, but Kak Mazni was quite weepy throughout the cake-cutting ceremony. 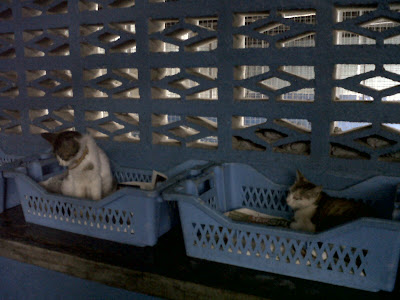 All comfy again, and in familiar territory.

I spent the whole day tidying up after the Jumble Sale and cleaning the animal shelter. The cats were not happy when I turned them out of their baskets to scrub and disinfect their sleeping baskets and litter trays, but once they had fresh, dry bedding, clean litter trays and sanitary and sweet-smelling living quarters again, they were happy to settle down in their baskets and let me pet them. 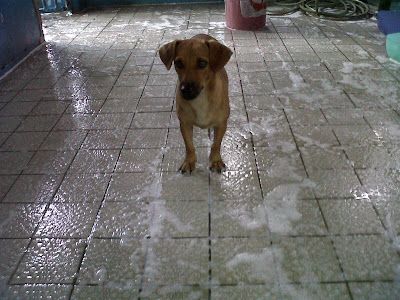 You can't find a better friend than a dog.

The dogs know that they are not allowed in the kennels when I am cleaning, but this little dog seemed to understand that I was feeling a little blue due to my aunt's bereavement and decided to come in to keep me company. Selective breeding has given us ideal animal companions in cats and dogs, and the bond between human and domesticated animals is strong. Cats and dogs are faithful, companionable, loving, responsive, reliable and able to thrive in human environments.

It was a quiet but productive weekend, and keeping myself busy helped me take my mind off my aunt's demise. It was troubling to try to determine whether or not I miss her. The last time I saw her was in 2004/2005, and perhaps I do feel remorse for not having visited her again since then.

Requiscat in Pace, Auntie. Know that you are surrounded by our love, always.
Posted by ~CovertOperations78~ at 23:14

My condolences on the passing of your aunt.

I add "Amen" to your prayer that she rest in peace.

CO78,
Oh....we feel your pain, love. We'll pray with you that she'll rest in peace.
I like this statement of yours:
"Cats and dogs are faithful, companionable, loving, responsive, reliable and able to thrive in human environments." If only more humans believe in it, there'll be no more war and hatred on earth. purrr....meow!

Dear Louis,
Thank you for your kind words. It means a lot to my family and me.

Dear Kitties-in-Sydney,
Thank you for coming by, and for your prayers. As for the statement, I think too many people focus on what they've lost or have to lose, not what they stand to gain. When I ask my friends why they do not intend to adopt more animals from the shelters and rescue groups, they tell me that the pain of losing a beloved animal companion is too much to bear. I feel pain as much as they do, but I cannot let my pain stop me from giving another animal a chance to live in a good home... or a chance to live at all, in the case of animals due to be euthanised.

Much love to you both, Louis and Kitties.

Condolences from Ravi and me. May your aunt rest in peace.
Glad the animals found new homes, Jack - Jack being one of them. The animals love you too and so do we:))

Thank you for your kind condolences, dear Keats. I am so glad the animals found homes too. Jack-jack has been at the shelter for almost a year, I think. So wonderful that he got adopted. He is such a friendly and loving little fellow. Love to you, Ravi and Robbie.

So sad to hear about your aunt, sweetie. And so I'm sending you a huge cyber hug.

Yes, I pray her soul is now at peace, and free of her worldly woes.

Dear Pat,
Thank you for your kind and comforting words. I like to think that my aunt is up there hearty and healthy and no longer in pain.
Cyber hug right back atcha.

the crowds were teeming and the atmosphere was feverish .

quite naturally, the clean-up must have been a nightmare -- there were thousands of plastic bags being left around indiscriminately...

will post photos on my blog.
**
you take care meanwhile...

Thank you for your condolences and kind thoughts, Mum-In-Malaysia.

Re Thaipusam: Not only was the cleanup a nightmare, nobody could find a single parking space. Everyone was parking all along the highway and people were still thronging the temple grounds on Sun, the funfair was still going on and there were loads of rubbish being discarded by the minute.

I will come by for a visit as soon as you have posted. Cheers.

I'm sorry to read that your aunt has passed away. May she be at peace.
May you draw comfort from your furry ones at home as well as all of your furry friends at SPCA. Know that you are being thought of...
-Mutt

Thank you for coming by and your kind and thoughtful words. I draw a lot of comfort from the kindness of my friends here. My furry ones at home and at the SPCA have been my pillar of strength. I don't know what I would do without them.

Sorry to hear about your aunt, Ee Lynn. Took me a while to get here, as I was checking your other blog. Talk soon!

Thank you for your kind condolences, Ellen. Sorry the two blogs caused confusion. Thanks for coming by!