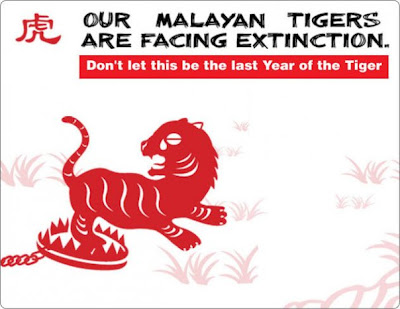 Tiger numbers are dwindling worldwide, but the Malayan tiger has the best chance not just of survival, but also of doubling its current numbers to 1,000 by the year 2020. Let's try to make the Year of the Tiger the year of hope for tigers!

The National Tiger Action Plan (TAP) was formulated in 2008 using the collaborative platform of the Malaysian Conservation Alliance for Tigers (MYCAT). The target of the TAP is to have 1,000 tigers surviving in the Central Forest Spine; the 51,000 square km backbone of Peninsular Malaysia’s environmentally-sensitive area network.

Saving tigers from extinction isn't merely the job of conservationists and Forestry Departments. It needs the support of the general public. With this in mind, MYCAT launched a campaign to have 1,000 faces (of volunteers and members of the public) painted in the likeness of the tiger as part of its public education and outreach effort.

I opted to be an outreach volunteer due to my passable command of Mandarin, which would enable me to communicate with rural ethnic Chinese communities. My duty included asking them to stop the consumption of wild meat, and to ask them to inform us via our Tiger Crime Hotline number if they know of any restaurants selling wild meat, especially tiger meat.

So, on Saturday, 20 February 2010, I carpooled to the event grounds, Dong Zen Temple in Jenjarom, Selangor, together with my friends Kim, Vegan Eugene and Mary Therese. 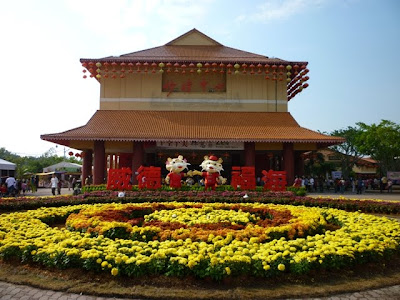 The Dong Zen Fo Guang Shan Buddhist Temple Complex in Jenjarom was constructed in 1994 as a place of worship and religious instruction. This is only one of the buildings in the entire complex. 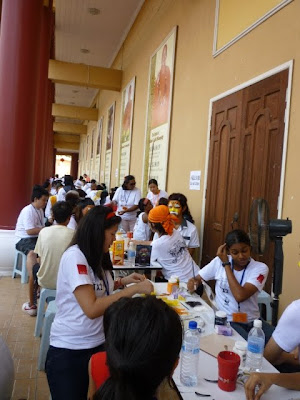 Everyone wanted to be part of the action, regardless of age or gender. Thank you for being such good sports, Uncles! 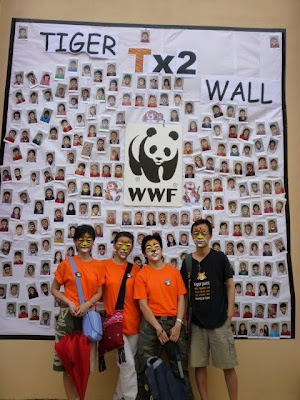 Mary Therese, Kim, me and Eugene posing in front of the wall of snapshots. 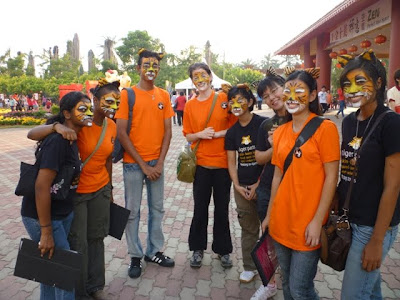 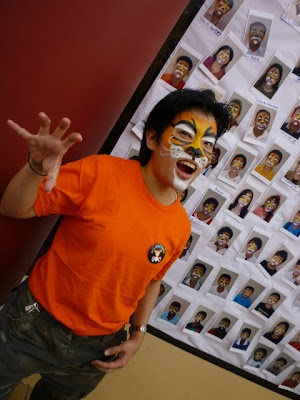 The Happy Tiger! I am always in my element when hamming it up for the camera. 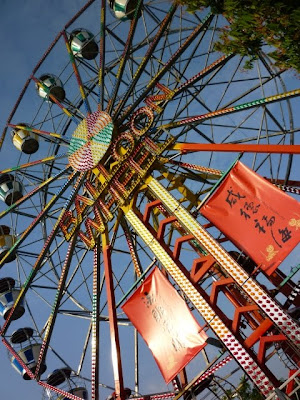 The temple grounds were converted into an amusement park for the Lunar New Year celebrations. Although I don't see how a Ferris Wheel could encourage mindfulness and prayer, Kim and I decided to go on it anyway, knowing we could carry out outreach work with the folks in the next gondolas. 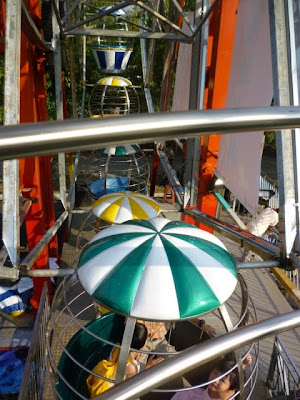 ...And we did, and we were successful. Families are the best targets because the children will want to have their faces painted, and we could talk to the parents about our roles in wildlife conservation as they wait. 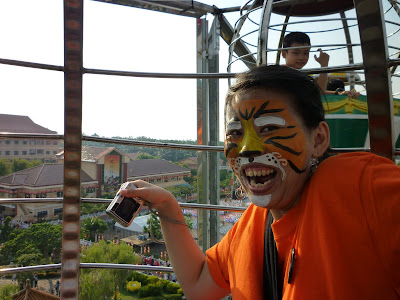 Me: "Hey Kim, can you take a photo for me please?" 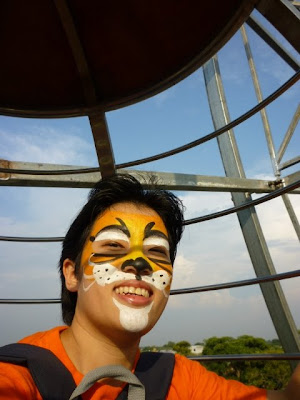 ... And so I had to take a self-portrait because Kim wasn't going to quit hanging on to the steel bars anytime soon. 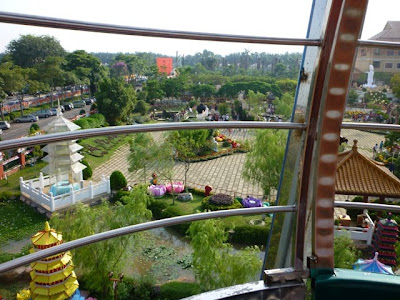 The temple grounds looked more like a theme park than a place of worship. 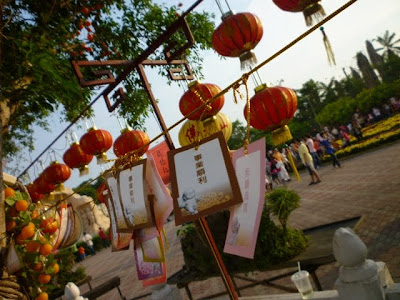 Prayer flags were available for a small fee and I didn't want to miss out on the fun. I hung two prayer flags for my conservation and animal protection goals. It's going to take more than just prayer to save Malaysian wildlife. 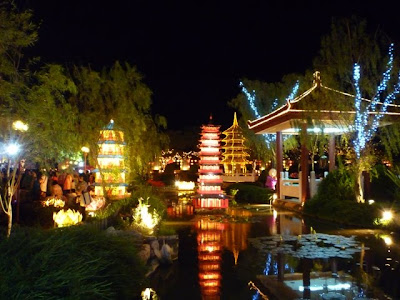 Night has fallen, and the temple grounds are transformed into an energy-guzzling fairyland. 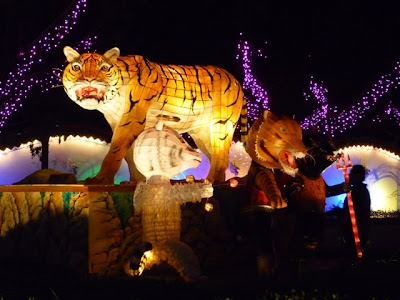 The majestic tiger will be but a creature of myth if more isn't done to conserve its habitat, protect its food sources and stop wildlife poaching. 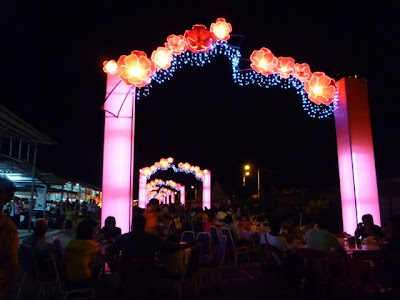 The temple food court, which serves only vegetarian food (yippee!), was transformed into a springtime wonderland.

Each volunteer was given coupons for RM10.00 worth of food, and my friends and I delighted in noodles, soups, burgers, fries, ice cream and cold drinks after a long day of being on our feet. We were to remain on duty until after 2200 hrs. 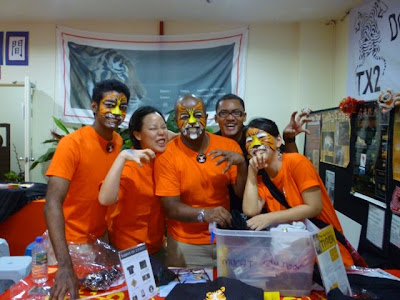 The MYCAT officers and volunteers were in good spirits upon surpassing our target of 1,000 painted faces!

The representatives of the individual conservation groups (MYCAT, TRAFFIC and WWF) were interviewed by the Malaysian Book of Records in relation to the seemingly impossible feat, but unfortunately, the interviewers did not seem interested in the meaning and objective of the event and behaved as though the volunteers had been painting faces for the sake of, well, painting faces. 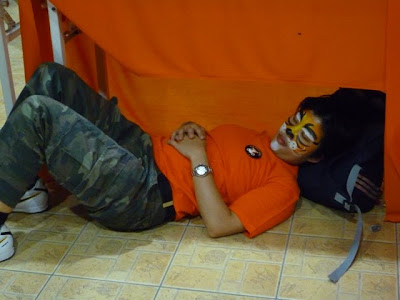 A tired tiger tried to sleep off a tummy ache at 2245 hrs. I had helped to pack and tidy up before retiring under the merchandise table.

Served me right for eating like a bottomless pit all day.

What can you do to help tiger populations?

1. Obviously, by not buying tiger products such as fur, teeth, bones, claws and meat.

2. Live simply that wildlife may simply live. Reduce, reuse and recylce more and use less energy, water and fossil fuels. Conduct your due diligence before visiting places of interest or booking holidays that may feature wildlife 'attractions' such as tiger parks, tiger farms and photo opportunities with captive big cats.

3. Abstain from eating wild meat. Every kilogramme of wild boar and wild deer meat you consume means one kilogramme less for tigers. Driven to search for prey in livestock farms and near human habitations, tigers end up regarded as pests and this makes them vulnerable to being hunted and killed.

4. Did you spot a snare or wild animal trap on your recent camping/trekking trip? Please report it to the Department of Wildlife and National Parks (Perhilitan) or MYCAT. Contact info given below.

5. Do you know of any restaurants selling tiger meat? Then please make a phone call to the Tiger Crime Hotline and give them all the details you can. Don't forget to include the name and address of the restaurant. All calls are confidential.

Find out more by visiting www.tx2.my!
Posted by ~CovertOperations78~ at 22:56

CO78,
On behalf of all cats (big and small) in the world, I say THANK YOU, sieh sieh, kamsia, terima kasih, merci.... purrr...meow!
Oh, next time you're gonna get tiger paint on your face, don't forget the fangs!!! hahahah...you look cute though.

Thank you for your support, dear kitties! But if I had fangs, I might scare away the people I am supposed to talk to!

Tell them you're the Twilight Tiger...they may even ask for your autograph. teeheehee...

All lovely painted tigers/ tigresses! Luckily you weren't hunted down!! Love your stamina and dedication for the tigers in the wild.

Thank you, dear Keats! Wish you and Ravi could have been there before all the volunteer positions were filled. It was so much fun. I can't believe we were given free food to come and support something we love and to have fun. All those uncles, aunties, grandmas and children -- even a little baby. Well, only one baby didn't cry during the painting. At least 2 babies cried and the painting had to be called off cos they were too scared of the strange faces.

Such a cutie tiger you make! Both when you're hamming it up, and when catching a catnap ;)

Thank you, dear Pat! For a vegetarian, I am a good ham, no? We had a great day and I got to spread havoc with my dodgy Mandarin that day! Luckily, most of my audience was too polite to complain, I think!

You're a gem Ee Lynn. I'm going to buy you a huge drink or three and give you your pet rock next week. Au says harumpfh; he's still pissed off at having had a Chihuahua in the house. Target is unconscious.

Thank you, dear Ellen! I must buy you and Tom a round of drinks when we meet up! Au and Target are so funny! Au is the best reason for the existence of Twitter, ever! A 'chiwawawawa', indeed! And you 'brot it home'! LOL!