Day 2 in Turkiye (25.5.2014): Visiting the ancient ruins of Troy (Truva) in Cannakale and Asclepion in Pergamum. 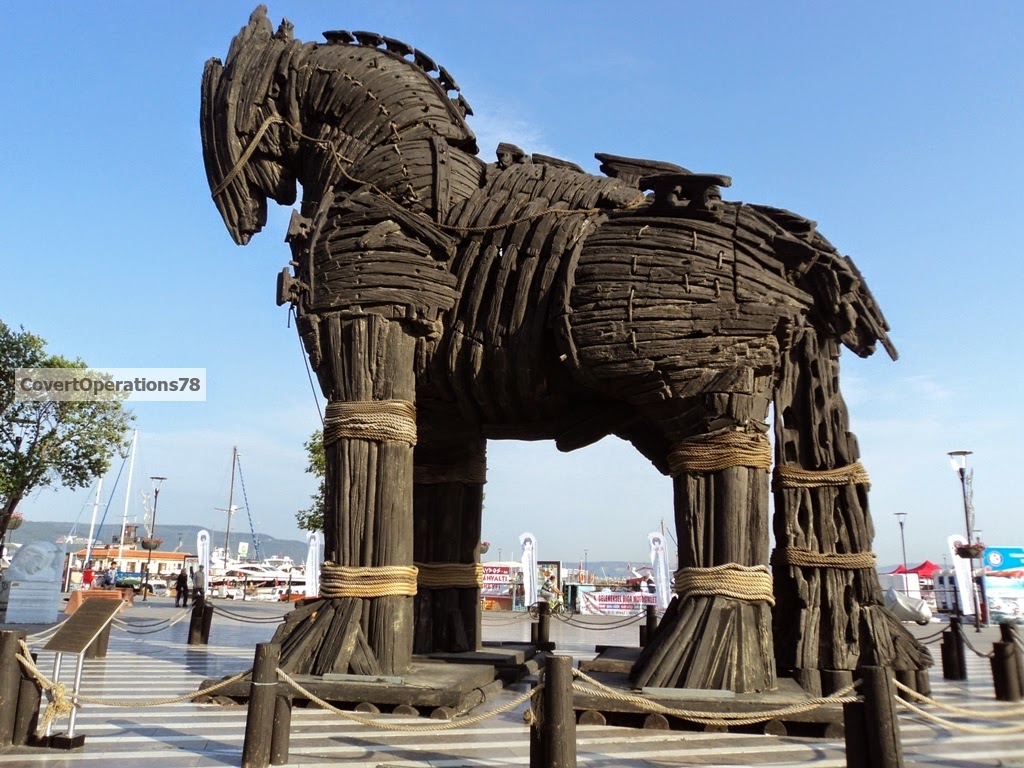 A wooden replica of the Trojan horse created as a prop for the movie starring Brad Pitt and Diane Krueger. The locals wasted no time trying to sell Made In China Troy-themed t-shirts to the tourists who came by the busloads to have their photos taken with the Trojan horse.

Until the 19th century, many historians doubted whether Troy was a real place at all. The one man who was convinced of its existence was German businessman Heinrich Schliemann (1822 - 1890), who in 1871 received permission from the Ottoman government to excavate a hill near the village of Hisarlik, which archaeologists had previously identified as a possible site for the city, and thus Troy, which was not a single city but a series of settlements built successively, one on top of another, was discovered. 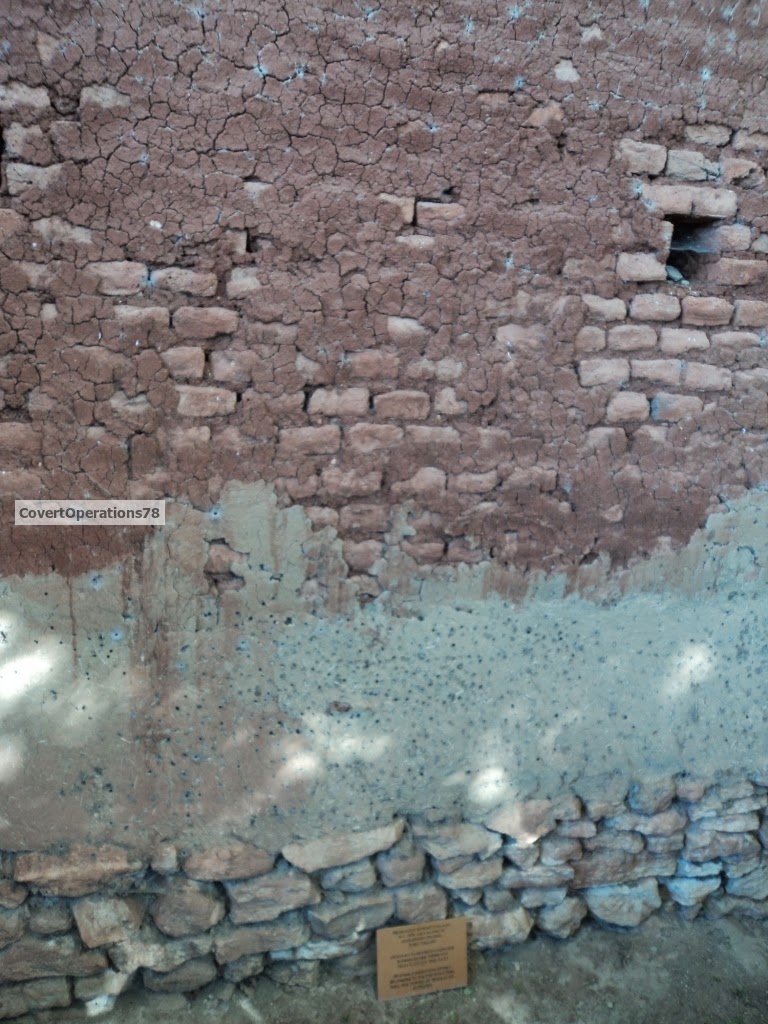 The ongoing excavation works show the different strata in the soil, supporting the discovery that Troy is not a single city but a series of settlements constructed one on top of the other.

The first inhabitants lived here during the early Bronze Age. The cities called Troy I to Troy V (3000 – 1700 BC) had a similar culture, but Troy VI (1700 – 1250 BC) took a different Mycenae-influenced character, doubling in size and trading prosperously with the region’s Greek colonies. 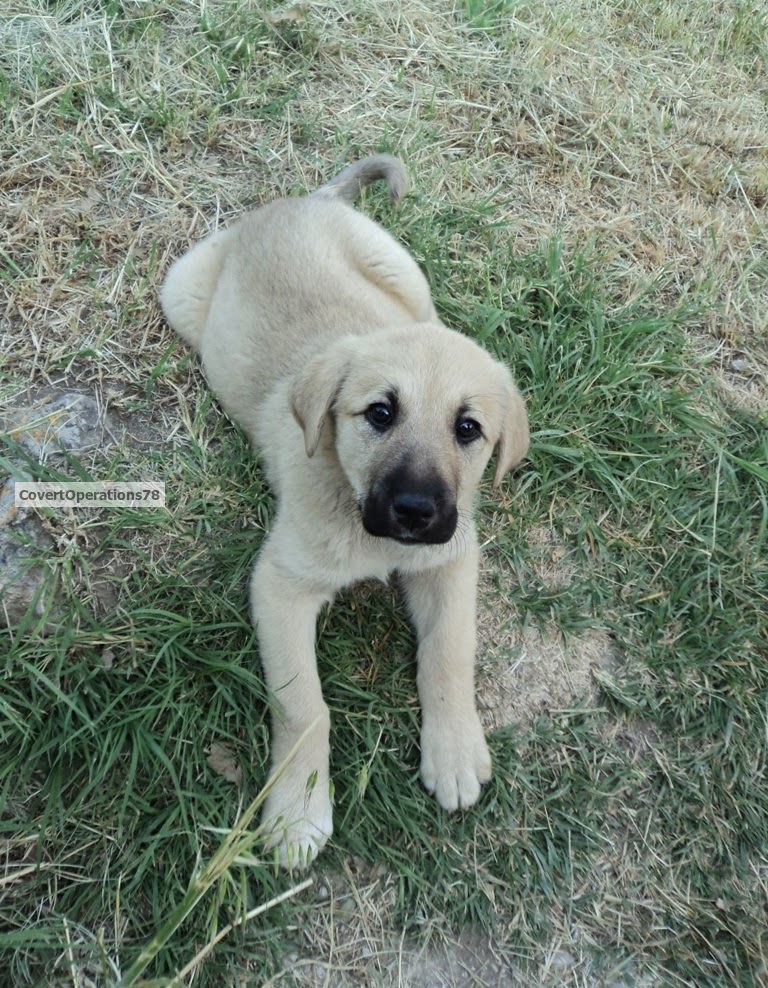 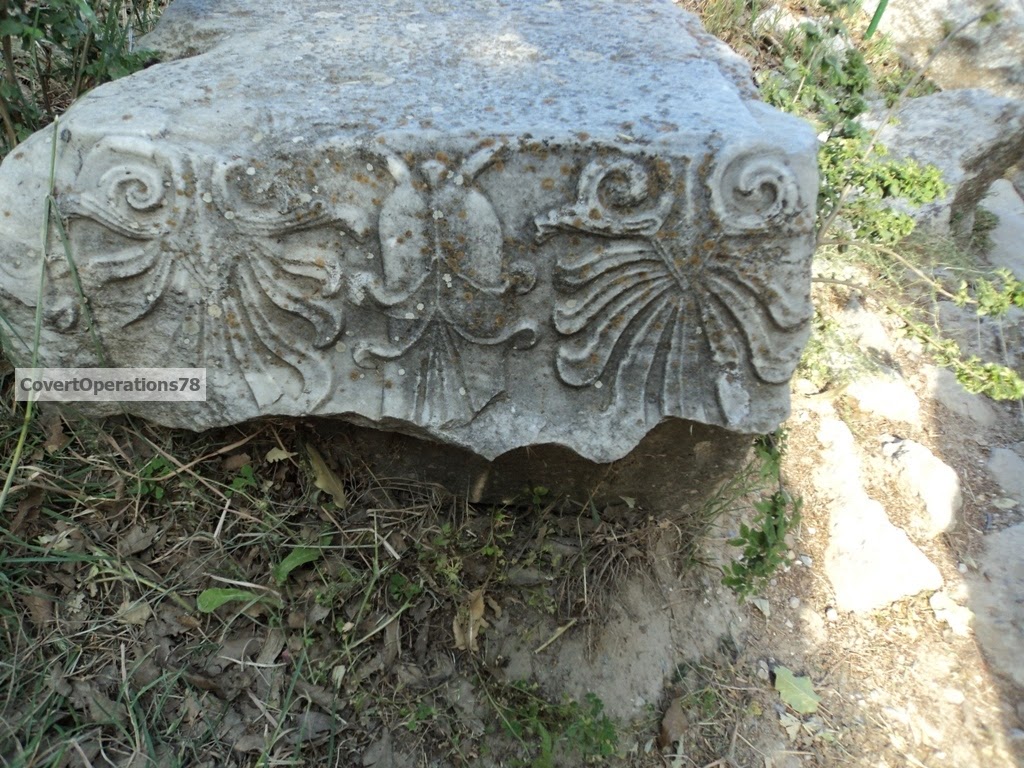 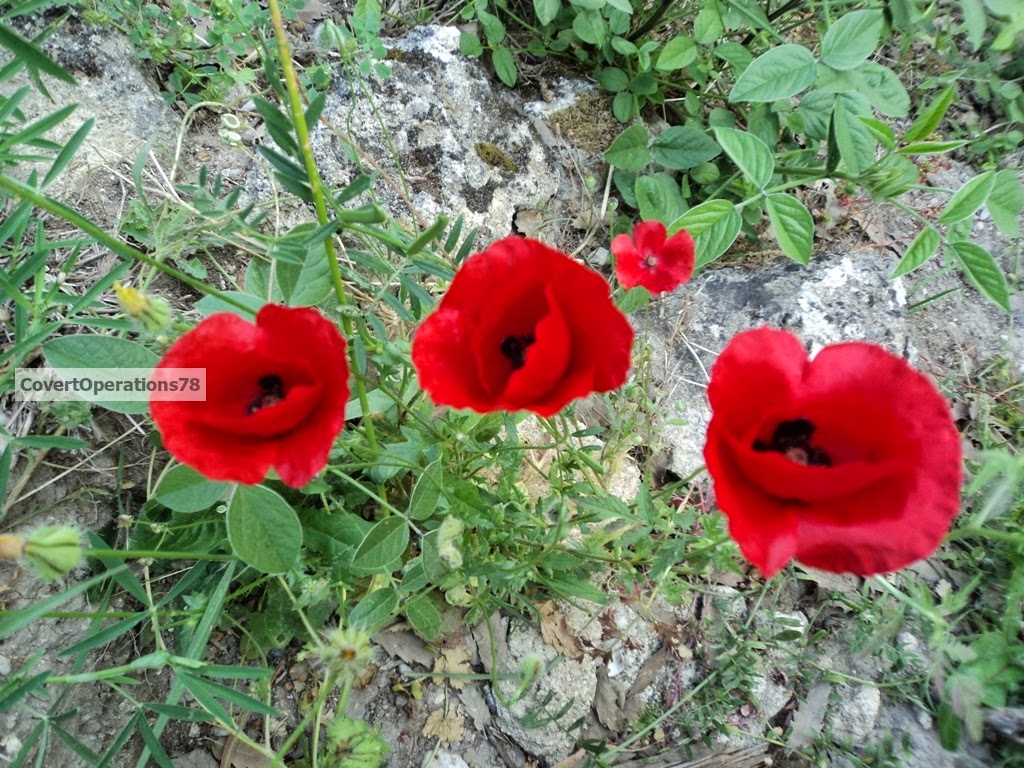 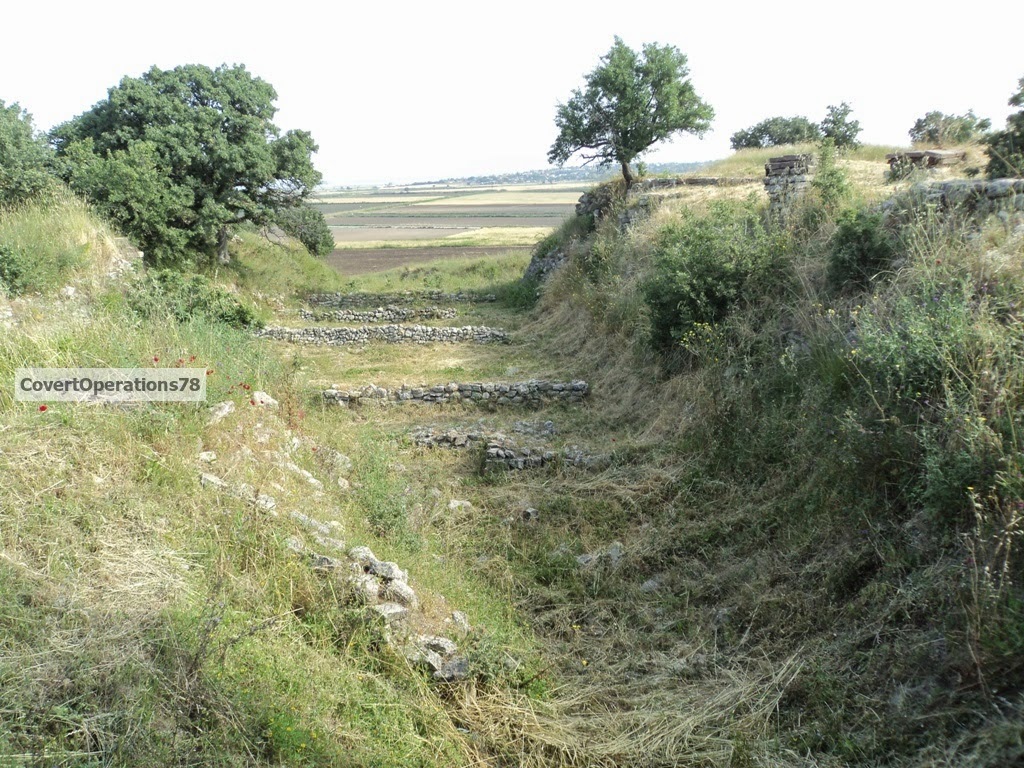 This is known as Schliemann’s original trial trench. Schliemann was more of a treasure hunter than an archaeologist. He tore open the site and plundered it of its gold artefacts, which brought him the fame and fortune he desired. Much of the treasure was displayed in Berlin, where it was seized by invading Soviet troops at the end of WWII. Following decades of denial about their whereabouts, the treasures were eventually found hidden away in the Pushkin Museum in Moscow, where they remain while international wrangles over their true ownership continue. 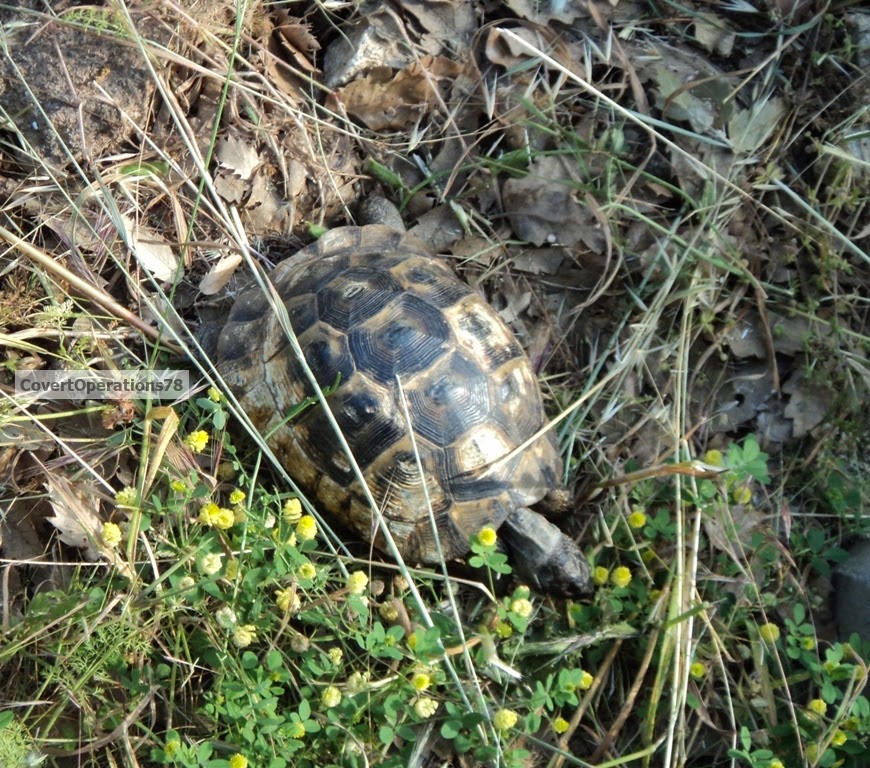 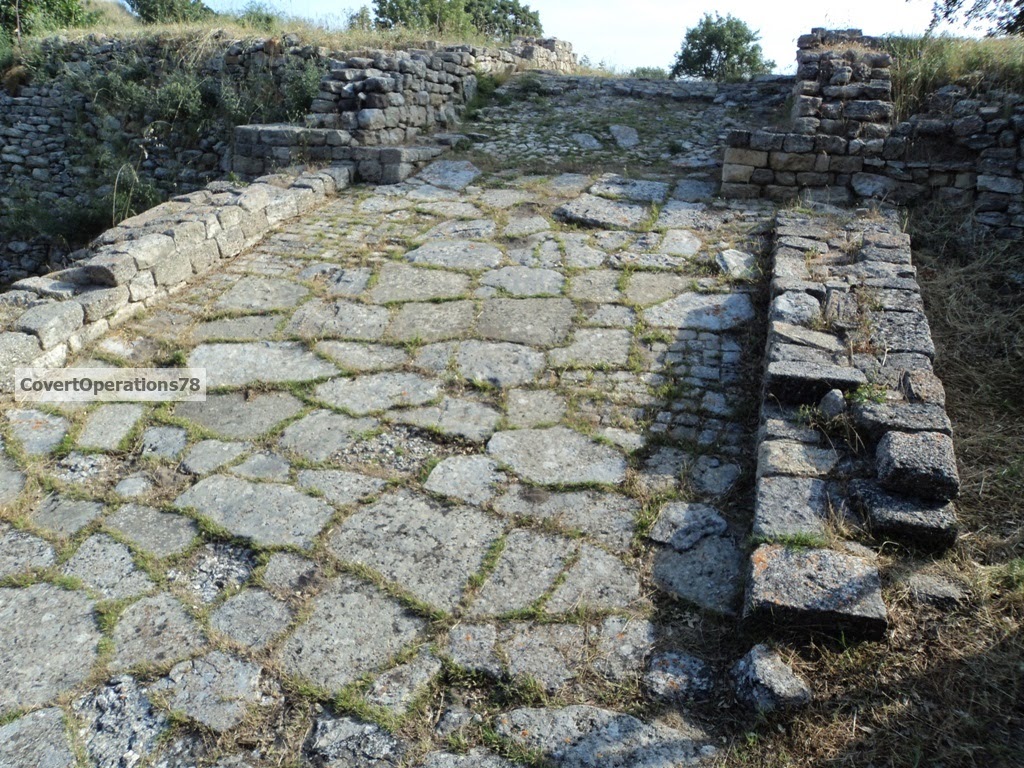 This is known as the Troy II Ramp. It was probably constructed to make it easier for chariots or horse carriages or whatever to move up a slope. Homer alleges in The Illiad that this ramp was for the purpose of bringing the Trojan Horse into Troy, but since Homer lived about 450 years after the fall of Troy, the credibility of his theory is in doubt. There are serious doubts as to whether there really was a Trojan Horse. It is more likely to be a bunch of romantic nonsense that Homer spewed off the top of his head. I’m pretty sure it wasn’t intended as a skateboarding ramp, though ;) 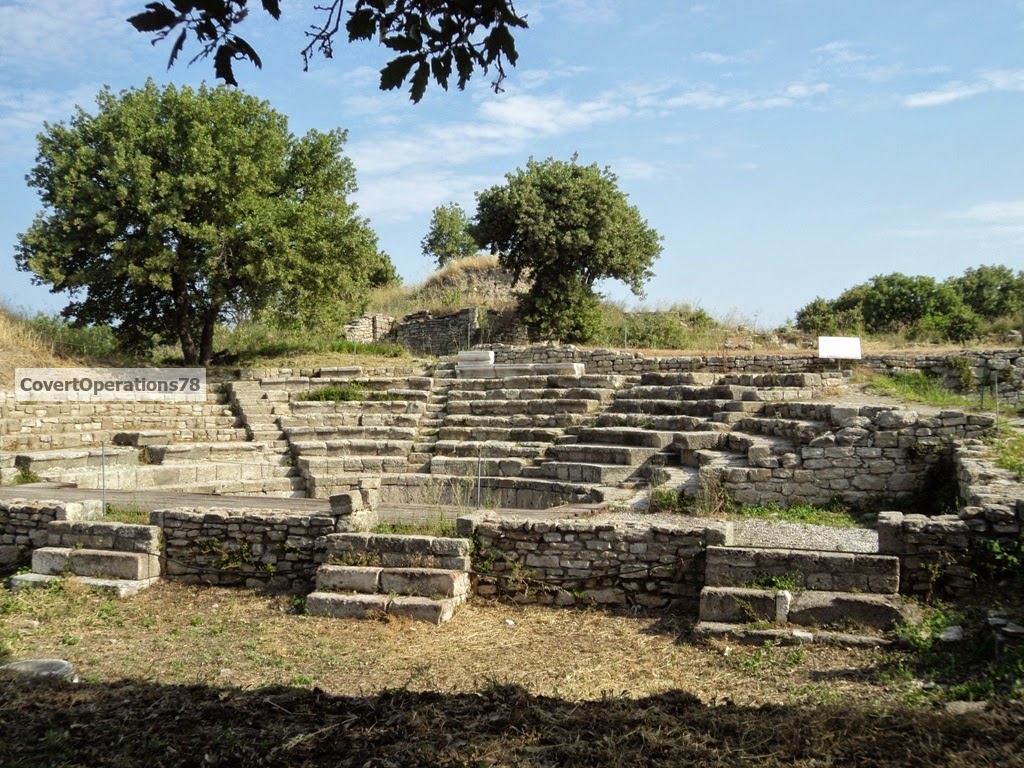 This is the Odeon, where the council/parliament used to meet to discuss affairs of the state. 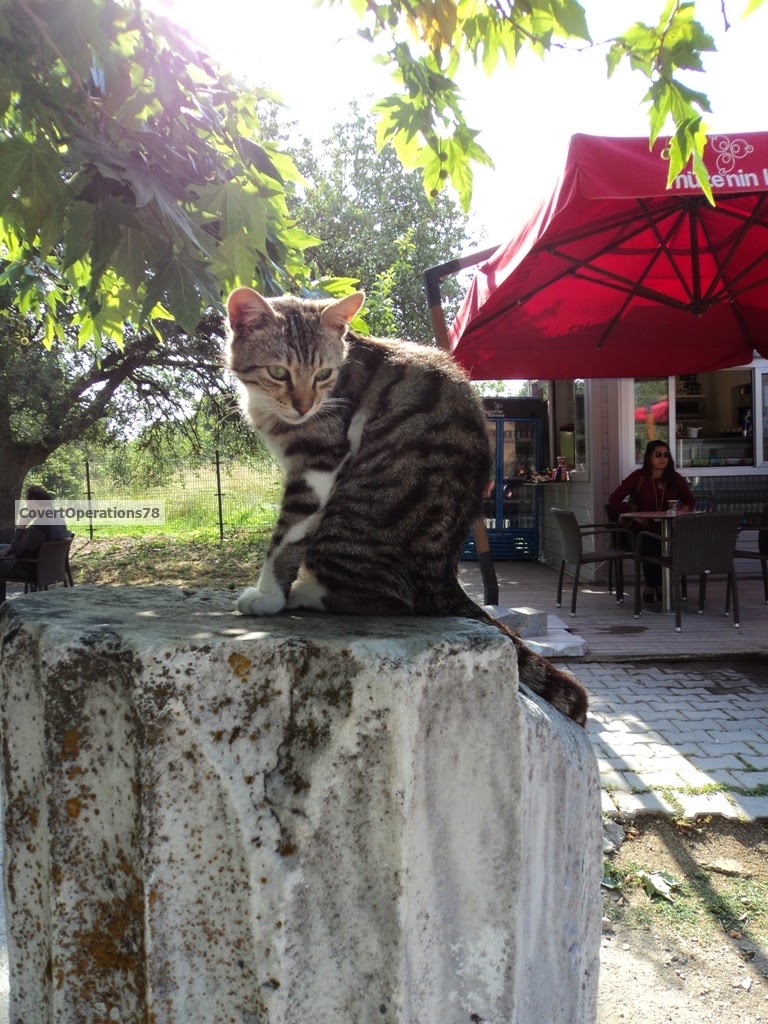 A Trojan cat poses for me on a column. For a cat of such beauty, I would go to war ;) 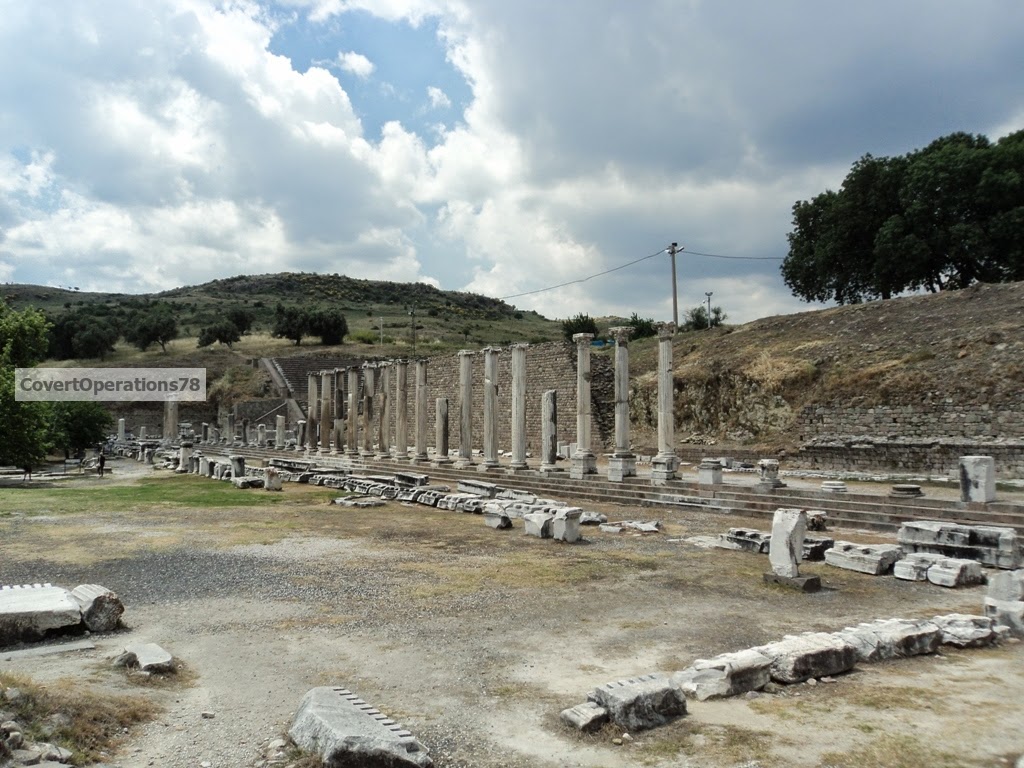 The Asclepion (Asklepieion) of Pergamum was perhaps the world's most famous ancient medical center, and is the second-most important site in Pergamum (Bergama). 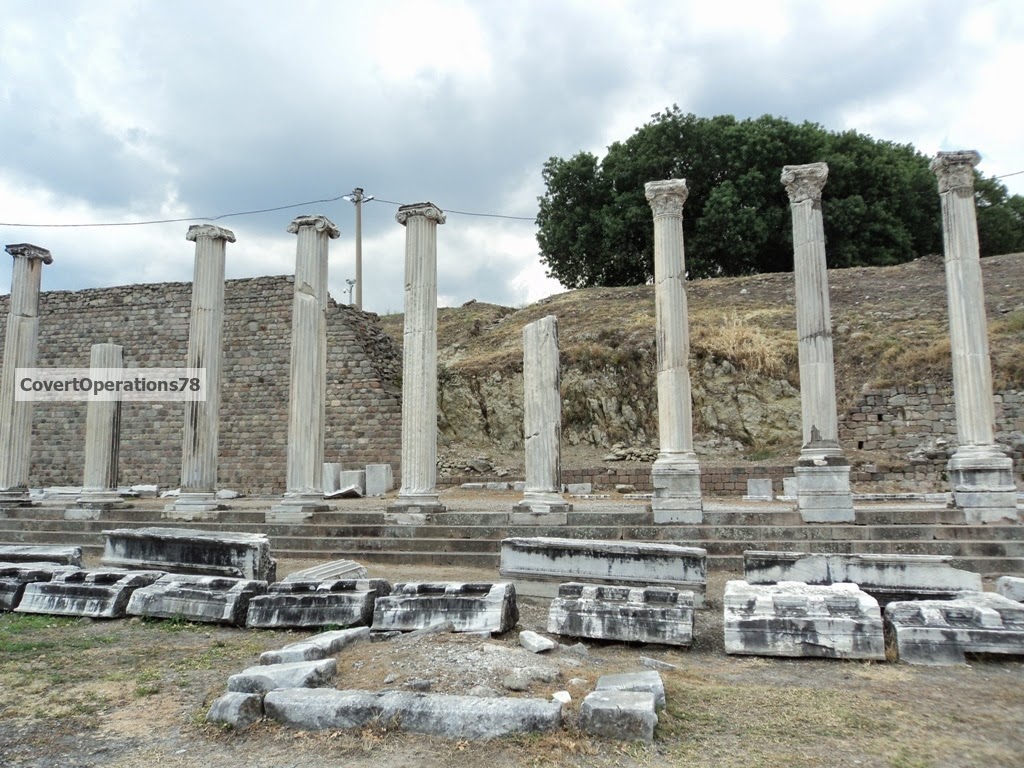 The remains of the monumental way into the Asclepion, leading visitors to the acropolis of Pergamum. 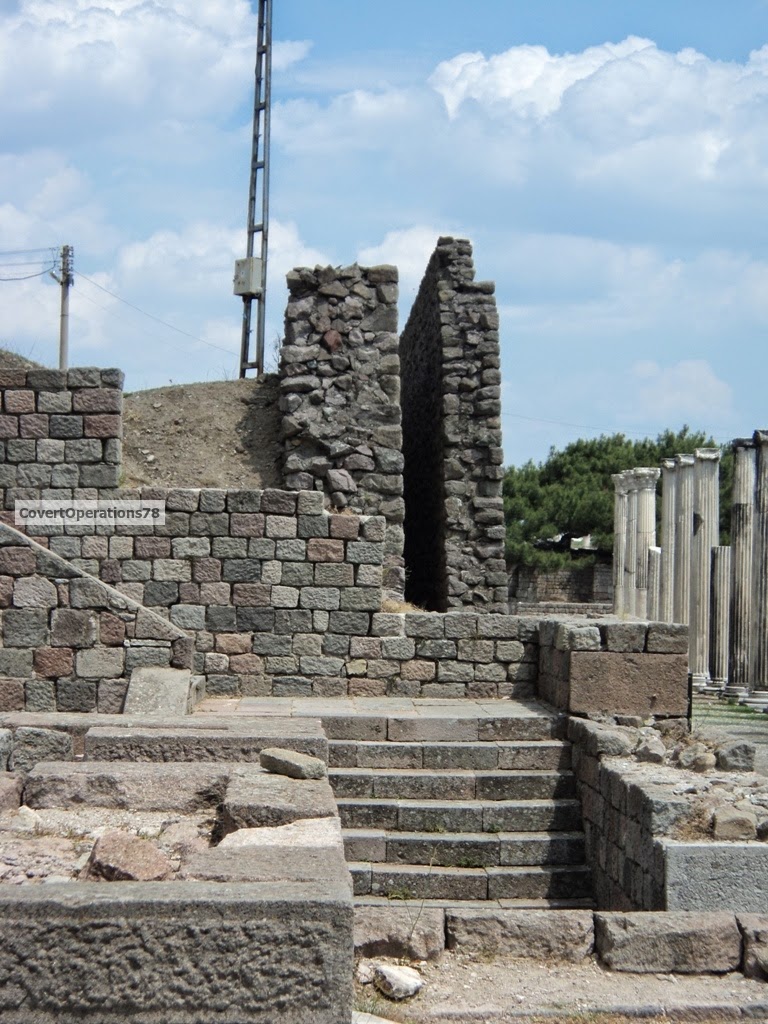 I was curious about these double walls in the Asclepion. Our guide, Ahmet, who had studied archaeology in university, explained that this used to be a library, and the double walls had the purpose of trapping and controlling humidity to protect the books in the library. 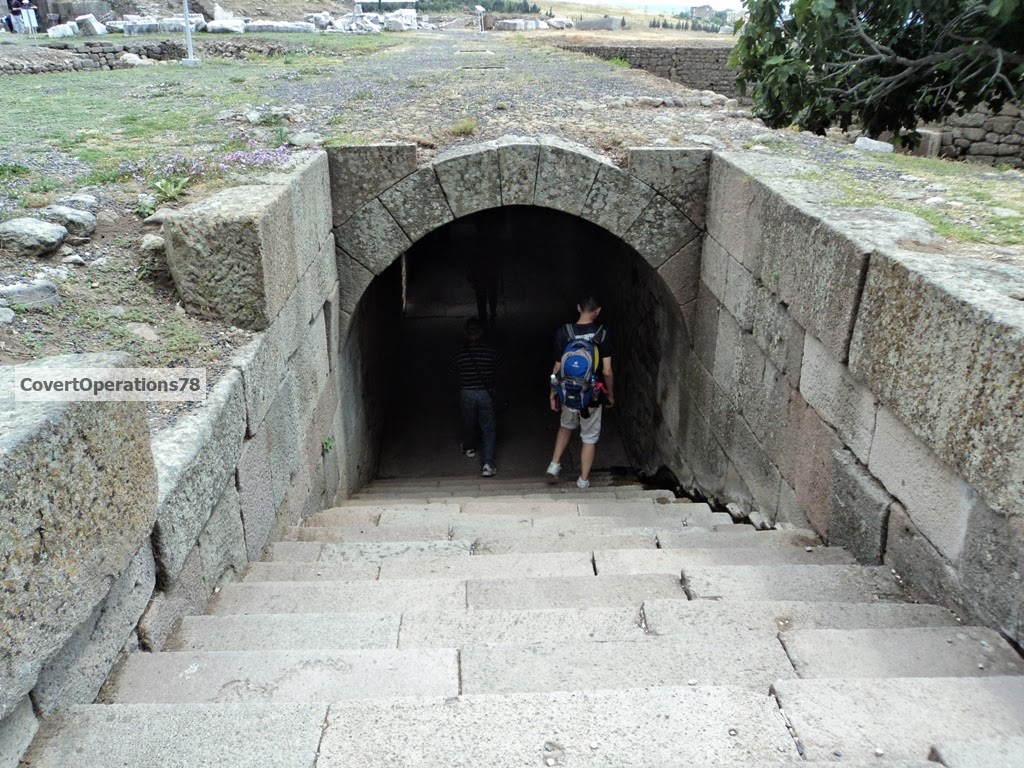 Down the underground passage in the Asclepion. 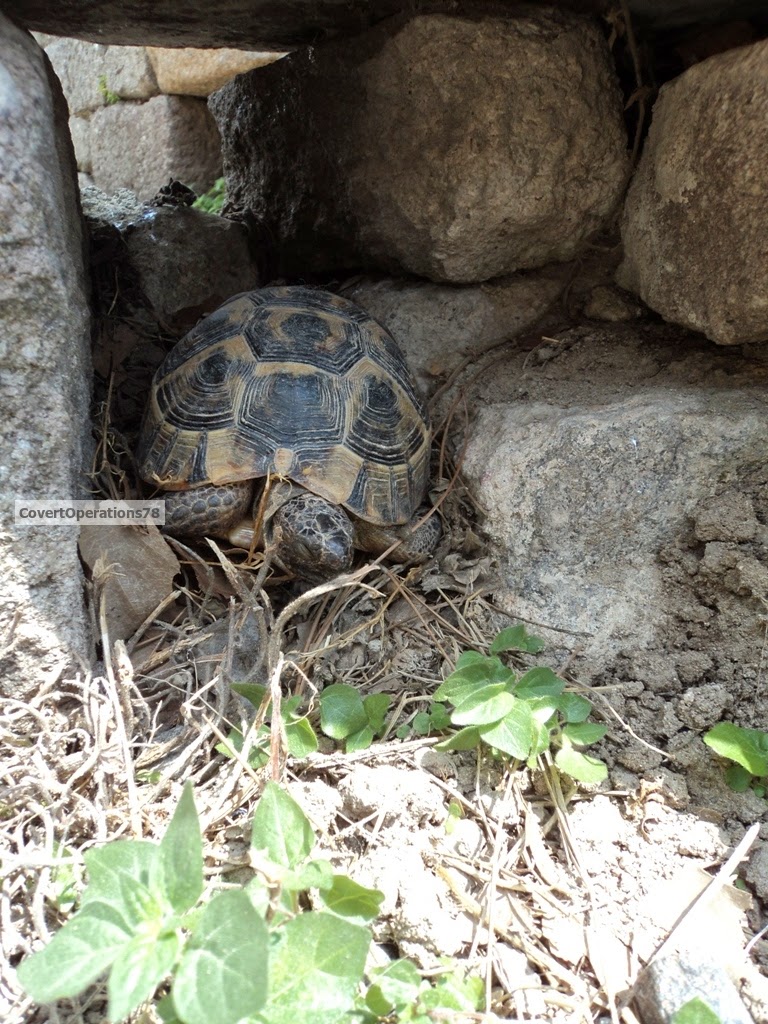 A spur-thighed tortoise taking a rest in the ruins of the Asclepion. Turkish wildlife fascinates me!