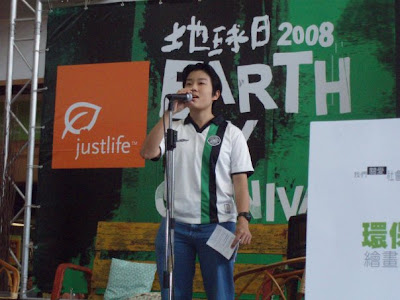 The MNS Corporate Communications Head had e-mailed me in early April asking if I would be willing to render a talk on environmentally-friendly practices on 26th April at the Ikano Power Centre in conjunction with an Earth Day Carnival organised by an organic products store. Believing that I would have the time to go to the SPCA for my usual 6 hours of animal care and kennel work after the former event, I assented. Not only did I agree to deliver a presentation, I actually invited the Parents over to Ikano on the said day, so I could take them out to lunch and perhaps do a spot of shopping for essentials. Oh joy. I have just invited 2 English teachers over to parse my sentences and criticise my grammar.

I didn't expect a big audience on the day. Public speaking and delivering presentations on Green Living is old hat to me, and I know that talks such as that I was about to deliver would be effective only if I had a captive audience, such as at a Residents' Association gathering, not an ambulatory crowd of shoppers. I did, however, manage to get a gaggle of interested visitors as well as product promoters from the Earth Day Carnival booths to sit through my presentation, which covered the following topics:
1. Environmental conservation and protection: Whose duty is it?
2. Climate Change and how it will affect us.
3. Our duties as consumers and good citizens.
4. Priorities identified by the Union of Concerned Scientists.
5. The Climate Change Action Survey.
6. Take the Green Living Challenge.

My CD wouldn't run in the organiser's laptop, so we had to do without the video screening of "The Story of Stuff" (visit www.thestoryofstuff.com). I had to rely on the interactive nature of my oral presentation to capture the attention of the audience instead. The parents both thought the presentation was informative and well-rendered, although Dad did have a few things to say about my grammar. I’ve never been any great shakes at keeping track of my tenses and singular and plural nouns. Well, at least the parents now understand a little of what I do as coordinator of the Green Living SIG.

It was rather late when I was done, and seeing as that it wouldn't make sense to drive all the way to the SPCA just for 2 hours of work (and what with the pulled muscle in my left shoulder and all), I decided to spend the rest of the afternoon with the parents instead. Dad was fidgeting to go home because the Streamyx serviceman would be stopping by the parental home to help hook the parents' laptop up to the Internet, so we told him he could go home and leave the shopping to us.

Mum and I spent an enjoyable afternoon trawling the mall. I bought us ice cream and a dishwashing brush from Ikea but was quick to point out all the things we didn't need and could live without. I've never been an impulsive shopper and have never been easily influenced by advertising or other people's wheedling. We had a ridiculously-priced tea at Absolutely Thai and I insisted on going through every aisle in Ace Hardware before we called it a day. Had a pizza dinner back at the parental home and spent the evening teaching the parents how to Google travel destinations and gardening tips.

Sunday was spent at the parental home letting my injured shoulder recuperate. Did some yard work, gave Amber a bath, dismantled and cleaned the cookerhood, cleaned the living and dining rooms, polished the furniture, sorted the recyclables, took Amber on a car ride and a walk and taught Mum how to do error-free Sudoku. Same old, same old.

Left the parental home around 2130 hours with a foldable cage in the back of the Battletank to be delivered to Wolfhound's hostel in Section 18 Shah Alam. The kid had been fostering kittens in her dorm room without a proper cage, and her roommates have not been overly happy about it. It took me an hour to locate her elusive college and I managed to talk the security guards into letting me in with the well-disguised cage. The security guards decided to play silly buggers with me and tell me that I was obliged to 'cover up' and wear a long-sleeved article of clothing in order to enter the premises. I laughed and responded that I am not a hostel occupant, a student, or a Muslim and will not be subjected to their preposterous regulations. Long sleeves, forsooth! That will be the day when I wear long sleeves! The cage was safely delivered into Wolfhound's hands and she reported later that the kittens were quite comfortable in it. I went back to the Bachelor Officer's Quarters, cleaned up after the cats, did the laundry, tidied the place up and repaired to bed with a cold bottle of beer.
Posted by ~CovertOperations78~ at 13:13