The Latest on Marmaduke 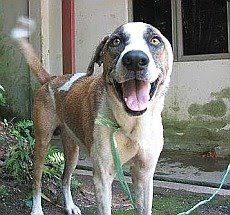 We have updates on the mongrel we met at the MNS HQ on Sunday. Serina, Ravinder, June and Suzanne were at the HQ on Monday and lo and behold, the mongrel was still there, and his ear was still bleeding. The ladies fed and bathed him, sprayed medicine on his wound, bandaged his ear and named him Marmaduke. Next, they took him to the vet to be vaccinated and to have his torn earflap stitched. For the time being, they housed him in a Buddhist temple in Puchong. Then, they sent out an appeal for adopters and foster homes. I did recommend putting flyers with his photo on it in mailboxes in the area, so his owner could come to claim him, but the ladies did something even smarter. They got a reporter from the Metro pages of The Star (Jake’s paper!) to do a write-up on Marmaduke in order to trace his owner and to find him a new home.

The good news first: 5 families called up, offering to adopt him. Even the Reverend of the Buddhist temple, after having Marmaduke with him for 3 days, expressed the intention to keep the dog.

The bad news? The owner called up, and alleged that he had taken Marmaduke to the vet before, but Marmaduke kept scratching the stitches open again. Exasperated, he gave Marmaduke away to a friend. His friend then abandoned Marmaduke at the MNS HQ and the owner did not know of this until Marmaduke’s photo came out in the papers. He now wants Marmaduke back.

I have advised the ladies not to return Marmaduke to his owner. If that good-for-nothing so-and-so had given his dog away before, what’s going to stop him from giving Marmaduke away again when Marmaduke gets hurt or falls sick? Also, I believe the whole story of having given the dog to his ‘friend’ is fictional. I believe he has abandoned the dog himself, and when confronted by neighbours who recognised the dog from the photo in the papers, felt embarrassed and compelled to call Suzanne up. If he thinks we are so stupid as to hand Marmaduke back to him, well, he’s mistaken. In fact, we should be reporting him to the SPCA and getting him charged in court for abuse and neglect of a companion animal. Marmaduke would definitely be happier in a new home.
I trust the ladies will make the best decision in Marmaduke’s interest and that Marmaduke will be very happy in his new home.
Posted by ~CovertOperations78~ at 12:12