Letter to the Editor: Making Our Roads Safer For Cyclists

LETTER TO THE EDITOR:
MAKING OUR ROADS SAFER FOR CYCLISTS 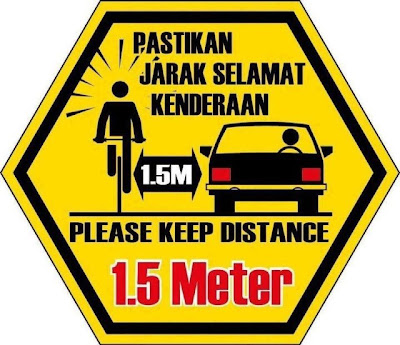 Our thoughts and prayers go out to the family of Rafizi Hamdan, the cyclist who was killed in a tragic hit-and-run accident on 18.3.2012.

As a cycling enthusiast and advocate, I am saddened by the news, and I seriously question the basic sufficiency of measures that ensure the safety of cyclists in Malaysia. I concur with the views of LaTua Cycling Club President Jafaar Abdul Rahman that cyclists should not have to wait for bike lanes to be constructed all over the country before motorists pay heed to the safety and presence of cyclists who share their roads. I was hit by a car once while cycling on a road shoulder in Petaling Jaya, and the driver averred that she had swung into the road shoulder without warning because she did not expect to see a cyclist there, and believed that all cyclists should restrict their cycling activities to parks and jogging tracks. The apathy of the authorities towards the safety and rights of cyclists has merely enabled and encouraged such arrogance from motorists, and deterred people from cycling to work and other destinations.

Most regular cyclists in Malaysia believe that the onus is on them to avoid getting involved in an accident, and most practice “safe cycling” rules – wear a helmet, use a headlamp and reflectors, wave to signal when you wish to cross the road, stay out of motorists’ blind spots and don’t ride against traffic. However, there does not appear to be a corresponding sense of responsibility from the authorities and motorists towards the safety of cyclists.

Actions and implementations that can save the lives of cyclists and pedestrians would include:

- Erecting signs along roads frequently used by cyclists to warn motorists about the presence of cyclists and to remind motorists to keep a distance of at least 1.5 metres from cyclists;

- Taking stern action against motorists who drive on the road shoulders and emergency lanes;

· Making sure that public pavements are kept clear of obstructions for the use of pedestrians and cyclists;

· Helping to create pedestrian and cycle paths routes along public roads, especially those within the vicinity of schools and public transport hubs;

· Enhancing signage and pavement markings to indicate pedestrian and cyclist crossings for all road users;

· Greater use of speed and red light cameras at susceptible intersections;

· Improving existing roads to allow for pedestrian and cyclist crossings;

· Improving the location of crossings to maximise line-of-sight for oncoming vehicles and other road users;

· Improving signage, pavement markings and lighting at all pedestrian and cyclist crossings;

We must aim to create a safe traffic system that does not unduly inconvenience road users. A reliable public transport system combined with better safety conditions for pedestrians and cyclists will go a long way in lessening traffic congestion, slowing down the need to build more roads and highways and reducing reliance on fossil fuels. Rising fuel prices, carbon emissions and air and noise pollution are all compelling reasons to introduce and develop ‘green commuting’ plans with the aim of reducing the impact of travel to and activity during work. Cycling, both as a means of transportation and for recreation, has immense health, economic and environmental benefits. The option of cycling on public roads should not be closed to cyclists by virtue of high accident rates and the indifference of the authorities and motorists. The authorities must view Rafizi’s untimely demise as a wake-up call to develop and implement measures to ensure the safety of cyclists.