So what's a volunteer doing on the TEDx stage?

I believe it was sometime in June that I was invited to be a speaker at a TEDx event on the topic of volunteering. TED stands for Technology, Entrepreneurship and Design -- I know this much, so I really wasn't sure whether to accept the invitation because I didn't see how volunteering would fit into any of the conventional categories of TED talks. But the organisers managed to persuade me that it would be good for the causes I champion and could encourage other young professionals to volunteer. Since it wasn't particularly inconvenient for me and since I am no stranger to public speaking, I decided to accept the invitation.

In my usual style, I went about creating slides and making notes about the benefits and advantages of volunteering, how best to commence volunteering and how to research causes to volunteer for, pretty much at the last minute, since I was swamped, as always, with office work, volunteering and taking care of the Rowdies. It was only when the organisers e-mailed me again to request a copy of my slides that I was told it wasn't what they wanted at all. They had wanted to me talk about my own experiences as a volunteer, how I got started volunteering, lessons I learned along the way, and where I see myself headed as a volunteer.

Lord have mercy.
You could have told me that 2 weeks ago.

And so with 2 days to go until the day of the talk, I altered my slides, threw my prepared notes out the window and decided to speak impromptu, using my new slides and pictures to prompt me.

There were some technical glitches on the day itself but I was otherwise quite satisfied with how the talk went. One or two of the other speakers had their family members in the audience. I found it incredible. CovertMum and CovertDad were probably under the impression that I was either attending my postgrad classes or volunteering at the SPCA as usual on that particular day. I didn't think the talk was important enough to tell them about it. Aravind did come with me to provide moral support, prevent me from getting lost on my way to the university, stop me from playing WordMole and Advanced Sudoku on my phone and take fuzzy photos with my lousy compact camera.

The official event banner.
Reproduced from http://www.tedxmmu.com/ without permission but in accordance with the principles of fair use. 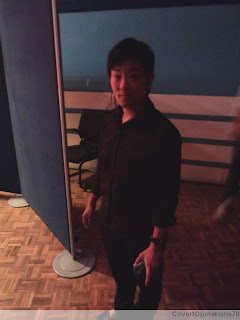 Getting ready behind the stage. 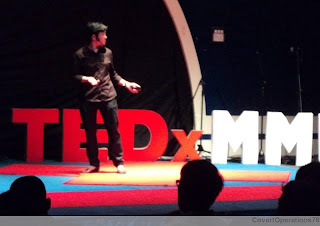 I look like I am leading an invisible dog out on an invisible leash, but really I am clicking a computer mouse in my hand to switch slides. 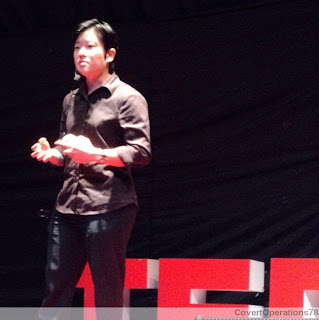 Oh well, perhaps it's just as well that the photos are blurry enough to hide my zits and double chin. Sigh. 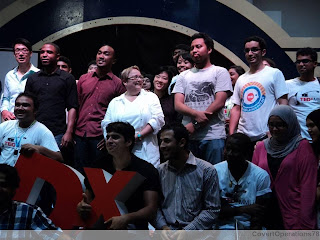 Speakers, organisers and audience all on stage now.
The lady on my left is Wivina Belmonte of UNICEF, formerly of the Canadian Broadcasting Corporation. Big props to her -- no powerpoint slides, no goofy school / childhood photos of herself, no unilateral declarations of her own awesomeness, yet her speech was the most powerful one of all. She is an amazing person with a huge heart. I hope to be more like her one day -- both as a person and as a speaker. 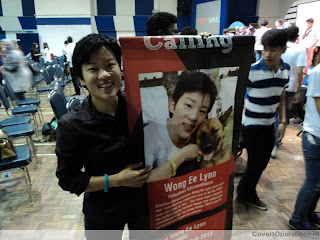 I decided to ask for one of the buntings of myself as a souvenir. Wish someone had edited the write-up for grammar and coherence, though.

The TEDx Talks organising committee finally uploaded the official YouTube video sometime last week. I think I sound a little loud and a little anxious because I am not used to being video-recorded live while I am talking.


I am not sure whether my talk would have a positive impact on anyone, or whether it would be watched at all, but I do hope to continue taking direct action to make a difference in our community, country and Planet for as long as I am able. Change doesn't happen just because one talks about it. Change happens when one commits to it, and hustles for it. So let's continue sticking our necks out and hustling for a better society and world.
Posted by ~CovertOperations78~ at 20:36 2 comments:


I first signed up as a Born Free Foundation Zoo Check Volunteer back in the mid-1990s, when animal welfare literature took weeks to arrive by snail-mail. My early visits to our National Zoo convinced me that Malaysian zoos, like most Asian zoos (then), fell way below acceptable animal welfare and education efforts.

Many years of campaigning later, I started volunteering with Zoo Negara as a way of learning more about managing and operating captive wildlife facilities and of becoming part of the solution to the problems associated with zoos and keeping wildlife in captivity.

Though many of us do not enjoy seeing animals in captivity, 41 Malaysian Nature Society members were keen to learn how to improve the quality of life of animals at Zoo Negara. Zoo Education Officer Edwina and team were there to greet us when we arrived on the morning of 28th July 2013 and we were taken to the Enrichment Centre, where we were to prepare food puzzles and treats for the lions, tigers, tapirs and elephants, to keep them mentally and physically stimulated. 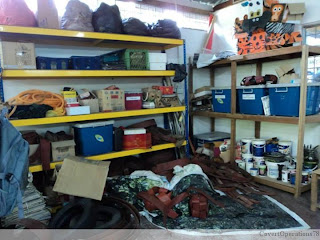 It was also a good exercise in repurposing, as I had instructed the workshop participants to collect cardboard boxes, coconut shells and toilet roll tubes for the Enrichment Centre to be converted into toys and puzzles for the animals. The above are some of the enrichment materials and tools stored in the Enrichment Centre. 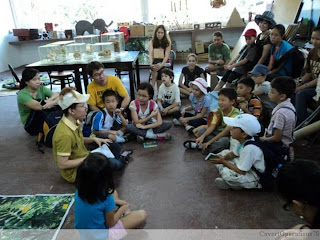 The children learned about animals' natural behaviours and how to encourage animals to display these behaviours to ensure that the animals stay active, healthy, stimulated and happy. 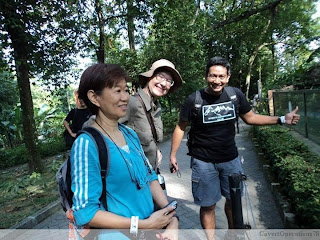 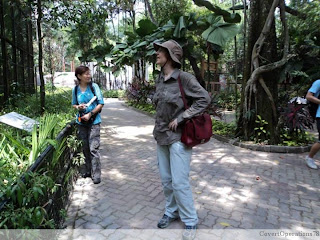 Due to the large size of our group, some of the participants chose to go on a Science Walk with Dr. Ille Gebeshuber, who is not only a Professor in Physics but also a dedicated MNS member and volunteer. 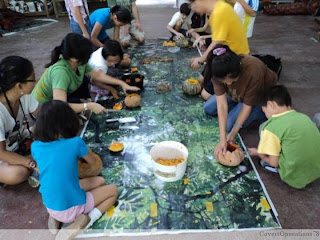 With the help of their parents, the children who stayed behind at the Enrichment Centre carved and hollowed out pumpkins to be stuffed with meat for the lions and tigers. The pumpkins would then be concealed in boxes or suspended from ropes to stimulate the big cats’ natural hunting and seeking instincts. 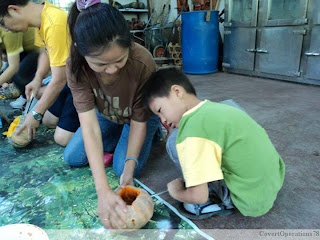 One of the mothers holds the pumpkin steady while a young participant drills the holes for the ropes. 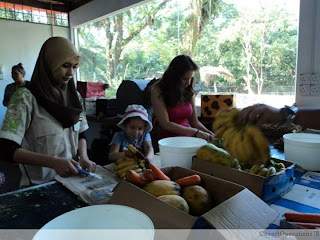 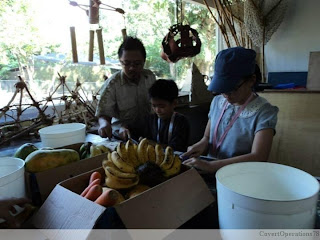 The other participants cut up fruits and vegetables for the tapirs and elephants. 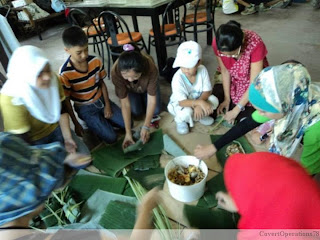 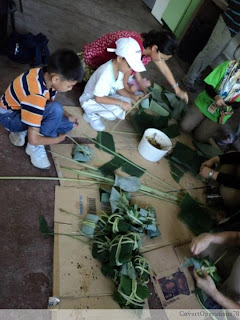 A group of participants wrapped a mixture of rice, palm sugar and bananas in banana leaves to be presented to the elephants. 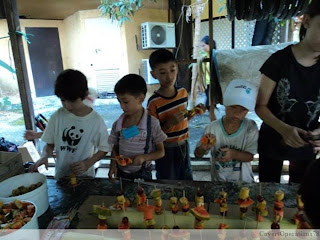 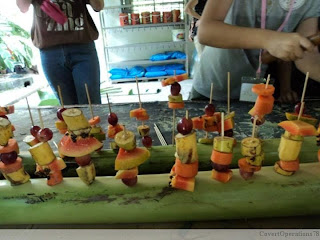 The children put fruits and vegetable pieces on skewers and poked the sharp ends into a banana trunk to create a whimsical fruit cocktail bar for the tapirs.


The Science Walk group joined us at 10 a.m. for the Animal Enrichment Observation. It was not merely a session during which we observed “cute animals doing cute things”, but an important and educational lesson on animals’ natural behaviours and social needs. Education Officer Edwina must be commended on her short interactive lessons on snare traps and the wildlife trade, habitat loss, why some animals could not be reintroduced into the wild, the need for zoos and animal sanctuaries, the reason for the Zoo’s ban on Styrofoam, and the conservation status of many animals (i.e. least concern, endangered and extinct). 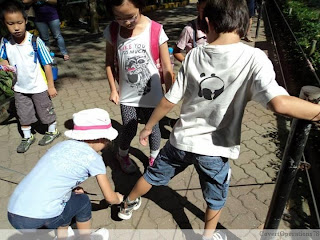 Here, some of the children learn how snare traps work and how to inform an adult and contact the Wildlife Hotline if they find snare traps in the jungle (these kids do go camping and hiking with their parents!), and how to report on restaurants offering wildlife products. 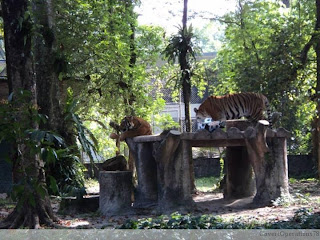 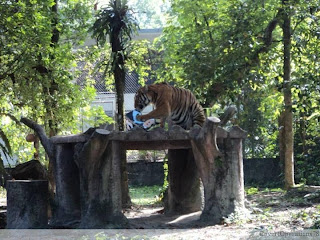 Well, there goes the cow! One of the tigers has found the pumpkin concealed in a box decorated to resemble a cartoon cow, but he wasn’t hungry enough to have his breakfast immediately. 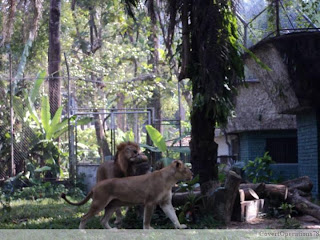 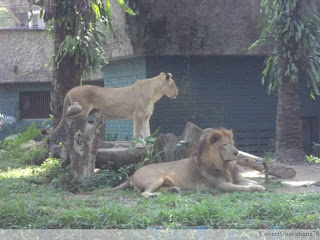 The lions found their pumpkins within minutes, but seemed more interested in guarding the meat and casting jealous glares at their neighbours, the tigers. 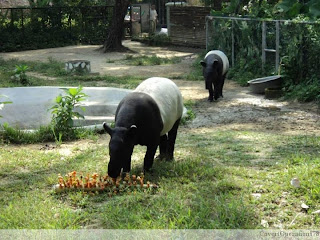 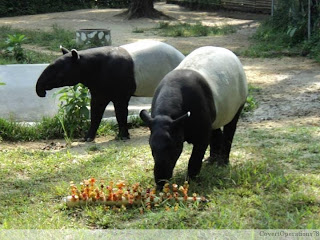 Here comes the MNS mascots, the tapirs! Their proboscis wagged merrily when they smelled the fruits. And no, they didn’t hurt themselves on the satay skewers. Aren’t they clever? 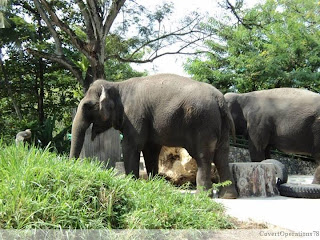 Siti and Sibol, two of the Asian Elephants, go on a treasure hunt for the food parcels. Thank you for accepting our little gifts, dear lovely elephants! 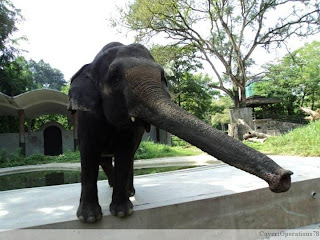 Siti the Asian Elephant says: “Reach out and touch somebody today!” 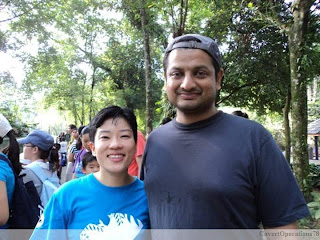 Aravind and me, the happy volunteers as usual.


In an ideal world, animals would be able to live peacefully in the wild without human interference. However, with the number of threats to wildlife such as deforestation, poaching and hunting, zoos and sanctuaries have to be set up to provide safe living spaces for animals, in particular, captive-bred or confiscated wildlife who can no longer survive in the wild. It must be remembered that zoos and sanctuaries can never be a good substitute for life in the wild. Animals in captivity can and do get restless, bored, depressed and frustrated, and start displaying stereotypic behaviour such as swaying, rocking, biting, begging and overgrooming their fur or feathers to the point that bald patches appear. It is hoped that our little contributions helped to make the animals’ lives a little more fun and interesting.


I would like to take this opportunity to thank Edwina and her hardworking team as well as our ever-obliging Dr. Ille for their time, effort and assistance. May we all continue to do what we can to help and protect wildlife and the natural world and to keep the spirit of voluntarism alive.
Posted by ~CovertOperations78~ at 23:18 2 comments: