Letter to the Editor: Perhilitan Needs To Answer For The Killing Of Dusky Langurs

LETTER TO THE EDITOR:

PERHILITAN NEEDS TO ANSWER FOR THE KILLING OF DUSKY LANGURS 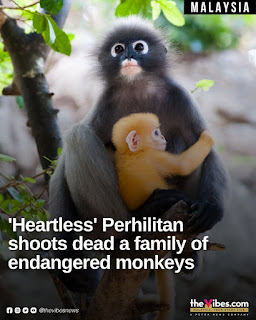 (Photo credits: The Vibes. Link to the original article by The Vibes here: https://www.thevibes.com/articles/news/28309/port-dickson-folk-livid-over-heartless-shooting-of-endangered-langurs)


It is a cruel irony that on May 23, just one day after the International Day for Biological Diversity, which was observed and marked with a positive-sounding statement from the Department of Wildlife and National Parks (DWNP / Perhilitan), Perhilitan officers allegedly shot and killed 20 dusky langurs, which are classified as Protected Wildlife under the First Schedule of the Wildlife Conservation Act 2010, and as Endangered under the IUCN Red List of Threatened Species.

The outrage and horror of the public over the alleged killing of these dusky langurs in Port Dickson is justified and requires an official response from Perhilitan.

It is unfathomable that trained and armed wildlife officers called to assist with the problem of aggressive long-tailed macaques would be unable to tell the difference between the shy and retiring dusky langurs and the admittedly bolder macaques.

The shooting of the langurs appears to have been executed unprofessionally, as instead of being merciful and quick, the suffering and agony of the langurs were unnecessarily prolonged, as described in the testimony of eyewitnesses. The additionally brutal act of executing a mother langur and her baby in cold blood has further left citizens wondering if Perhilitan officers are able to evaluate what does or does not constitute a threat.

This unnecessary and vicious killing is not an isolated incident. The Perhilitan units in various states have a long history of being implicated in the killing of wild animals, many of which have not been proven to be threats to local residents. There is a report of Perhilitan Negeri Sembilan killing a peaceful herd of wild boars in October 2017, and even enabling a pack of hunting dogs to maul the wild piglets to death. In 2013, Aljazeera reported that Perhilitan culled 10,000 long-tailed macaques in 2012, and Perhilitan confirmed the existence of the culling operations even while acknowledging agricultural expansion and housing developments near forested areas to be the causes of human-macaque conflict. We must remember that the population of stray animals and wild species such as macaques explodes only when humans make changes to the environment and interfere with the lives of animals so significantly over a period of time that it changes the availability of food supply and the existence of predators and competitors of a particular species.

Ironically, the Director-General of Perhilitan had in an official pronouncement in March 2019 reminded the public not to kill or ill-treat wildlife, and warned the public that cruelty to wildlife is an offence under Section 86 of the Wildlife Conservation Act 2010. The D-G had also emphasized the need to protect wildlife and ensure the survival of endangered species, and sought the cooperation of the public to contact Perhilitan in the event of a human-wildlife conflict instead of taking matters into one’s own hands. Can we, the public, now invoke the same section to demand that the officers who had shot the langurs be prosecuted for cruelty to wildlife? Considering that even non-wildlife experts and local residents are able to tell that the langurs are not a threat to humans, can the Perhilitan officers really be said to have acted in good faith and to actually believe that they were carrying out their official duties to protect wildlife and mitigate human-wildlife conflict? If that were true, then perhaps a retraining of all Perhilitan officers is in order.

Even in the case of problem wildlife such as long-tailed macaques, wildlife experts concur that culling may not be the best solution, and should never be the first option. Culling could destroy biodiversity by harming unrelated species, for example, in the current case in which complaints were made about long-tailed macaques but it was ultimately the harmless and endangered langurs that were slain. Culling could result in unintended ecological consequences, for example, as in the now-famous anecdote of how China had, in 1949, culled sparrows as a disease prevention measure, which resulted in the destruction of crops by locusts as there were insufficient sparrows to keep the locusts in check. Culling may, in fact, lead to the increase in the population that the authorities is trying to cull, as can be seen in the case of the feral cat population in Tasmania. Scientists and animal behaviourists have observed that when older, dominant adult animals are killed, younger animals move in from the surrounding areas to replace the adult animals, as the older and more dominant adult animals are no longer around to kill or chase away the younger animals. Culling some animals from a ‘problematic’ colony also creates more space, food, and reproductive opportunities for the ones that remain, and within a short time, their population will bounce back to what it was pre-cull.

To reduce human-macaque conflict, developers need to build human homes further away from wildlife habitats and forest fringes, create buffer zones, and install security fences and monkey-proof garbage bins. Perhilitan needs to monitor areas with reported human-wildlife conflicts and enforce their threats to fine and punish people who feed wildlife. Without the wildlife feeders and easy availability of human-generated food waste, much of the conflict between humans and macaques could have been reduced.

Culling is cruel both to the humans who have to desensitize themselves to the pain and suffering of animals to perform this brutal act, and cruel to the animals who are often just the victims of their circumstances – wild boars and macaques, do not, after all, ask for housing areas or highways to be constructed through their habitats and do not ask to be fed. Translocation and relocation to national parks and forest reserves, sterilization of wild animals by qualified vets, and biological pest control by reintroducing the natural predators of an overpopulated species are all more humane, more sustainable, and more responsible options than culling, although more expensive and time-consuming initially. However, we owe it to the animals to at least find kinder and gentler resolutions to human-wildlife conflict, considering that the conflict is a manmade one.

Public confidence in Perhilitan as a wildlife protection agency is at an all-time low. Those of us working in the conservation and animal protection sectors have a difficult time convincing members of the public to report wildlife crimes and urban wildlife sightings to Perhilitan via its hotline numbers. This does not bode well for the future of wildlife conservation and rehabilitation in Malaysia, if the general response of the public is that they would rather condone the keeping of wildlife as pets or release captured wild animals themselves than refer the matter to the country’s only official agency responsible for the protection and conservation of wildlife. The D-G of Perhilitan needs to investigate the killing of the langurs immediately and come up with new SOPs for dealing with human-wildlife conflict to restore public confidence in the agency. Members of the public will also need to play their part in learning to coexist with local fauna and reduce the risk of human-wildlife conflicts instead of reporting encounters with wildlife as problems to be dealt with and eliminated.