Letter to the Editor: Halt Logging In The Terenggun Virgin Forest Reserve

LETTER TO THE EDITOR
HALT LOGGING IN THE TERENGGUN VIRGIN FOREST RESERVE
The Pahang Menteri Besar’s statement disavowing responsibility for logging in the Terenggun Virgin Forest Reserve (VFR) in Kuala Lipis defies logic and the principles of accountability and transparency.
If, as the MB stated, no logging permits have been issued for the Terenggun VFR, then the tree-felling activities must necessarily be illegal, whether the logging is for the purpose of the timber industry or for road construction, as claimed in his statement dated 20th August 2016.
Based on observable facts and basic civil engineering practices, there are no instances in which timber is utilised in modern-day road construction in Malaysia. It follows therefore that the trees were felled to clear the way for road construction and the timber became just another source of income.
Either possibility is an alarming one, as neither logging nor road construction should be permitted in a forest reserve, especially one with such high biodiversity as the Terenggun VFR. Logging and road construction in Terenggun would affect air and water quality, destroy vital watersheds leading to the increased risk of flash floods, landslides and drought, fragmentise and annihilate wildlife habitats and hasten the extinction of wildlife.
There is no environmental or traffic impact assessment report to indicate that there is a necessity for a road to be constructed through the Terenggun VFR. Opening up a road in a forest reserve would simply create access for illegal loggers, hunters and wildlife poachers. Constructing a road through this ecologically-sensitive area would not alleviate any traffic problems or improve the quality of life of Pahang citizens in any way. It would instead cause both human and animal populations to suffer adverse effects from the reduced air and water quality and increased carbon emissions, human-wildlife conflicts and traffic fatalities.
It is clear from the ambiguous response of the authorities on the issue of logging in the Terenggun VFR that the forest-clearing was carried out in a highly irregular manner without complying with proper procedures or without any proper assessments or reports.
As a concerned citizen, I therefore urge the Pahang State Government and Ministry of Natural Resources and Environment (NRE) to put an immediate stop to logging in the Terenggun VFR and other forest reserves, and take steps to protect forests and wildlife.
Tropical rainforests have more economic value intact than degraded, due to the ecological and sociocultural services they provide. Pahang stands to gain more economic benefits from keeping its forests intact and biologically diverse, than from issuing permits for logging, mining and road construction in forested areas. Pahang is well-known for, among others, its national parks and great ecotourism potential, and therefore there are economic and cultural incentives for conserving its forest reserves and promoting sustainable use of its forest resources.
The state forestry authorities are entrusted with the honoured duty of monitoring and protecting forest reserves and gazetted areas. There are no defensible reasons why the state forestry department would condone or be ignorant of any intrusions of such degree.
There are countless concerned and civic-minded citizens and environmental organisations who are willing to assist the government and forestry authorities in monitoring and protecting our rainforests and wildlife, should the need arise. Civil society’s readiness to play its part in conservation efforts must now be matched by political will on the part of state and federal authorities and enforcement agencies to protect and conserve forest reserves.
WONG EE LYNN
COORDINATOR,
GREEN LIVING SPECIAL INTEREST GROUP,
MALAYSIAN NATURE SOCIETY
Posted by ~CovertOperations78~ at 17:09 No comments:

I make no secret of the fact that I am lazy when it comes to exercise. I love outdoor activities and hard physical labour (housework, gardening, hands-on volunteering and home improvement/DIY projects), but running for running's sake just seems like such a mindless, tedious activity to me. I can't for the life of me see why I loved it so much in my schooldays.
This is probably how my friends (who are serious runners) prepare for marathons and road races:
Mon: Slow long distance run
Tues: Speed work
Wed: Recovery run
Thurs: Slow long distance run
Fri: Speed work
Sat: Social / group run
Sun: Sunrise hike up some hill or mountain or the other, where they will take fantastic photos of Broga Hill / Tabur East / Bukit Kutu / Gunung Nuang / Gunung Datuk and post it on Facebook with inspirational quotes about goal-setting.
Repeat every week until the week of the Race. Build up weekly base mileage over a period of 6 months.
Race Week: Carbo-load. Daily tempo run and strength-building exercises.
Night before a race: Get race gear ready, eat well, get plenty of sleep.
And this is how I prepare for half-marathons and road races:
Mon: Play silly buggers.
Tues: Play silly buggers.
Wed: Play silly buggers.
Thurs: Play silly buggers.
Fri: Play silly buggers.
Repeat each day and each week until the week of the Race.
Night before the race: Go through collection of sneakers to locate pair with lowest number of duct tape patches. Download exciting audiobooks into MP3 player to listen to while running. Go to bed 4 hours before the race. 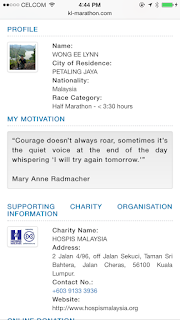 In spite of my lack of self-discipline and disinclination for training, however, I signed up to run a half-marathon (21km) for Hospis Malaysia in the Run For A Reason category of the Standard Chartered KL Marathon this year. I am a better fundraiser than I am an athlete, and thanks to the generosity of my friends, I managed to raise RM1,400.00 for Hospis Malaysia.
I participated in two road races in July and August, which means I have reached my personal target of running in 3 road races this year (the first one was the Turtle Conservation Run in March). It should have been 3 road races in 3 weeks, but I busted my left ankle during the Standard Chartered KL Marathon and could not participate in the Wild Tiger Run the following Sunday.

On 31st July, I participated in the Blood Donor Fun Run, which I had registered for during my last blood donation on 14th May. 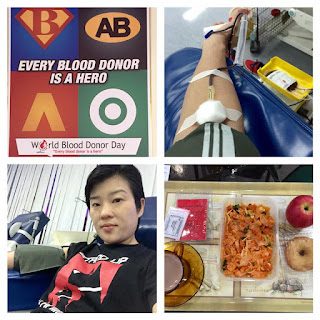 This photo collage was made after my last whole blood donation at the National Blood Bank on 14th May. I had spent the morning observing and making notes on the SPCA's Pet Care Programme, and then went to donate blood during lunch hour. The National Blood Bank has a certain allocation of meatless meals for vegetarian blood donors these days, for which I am grateful. On that particular day, I was given fried kuay teow, a doughnut, an apple and a hot beverage. I then picked up a race form and signed up for the race on my way out of the blood bank.
I completed the Blood Donor Fun Run and picked up my Finisher's Medal despite arriving late (couldn't find a parking spot) and getting distracted several times by a flock of Painted Storks, a Greater Racket-Tailed Drongo and some Black-Naped Orioles. 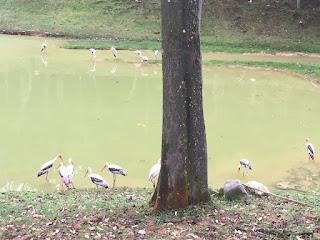 Painted Storks around the lake at the Bukit Jalil Recreational Park. 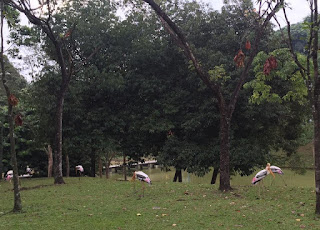 Painted Storks ignoring me while I ignored the fact that I had a run to complete. 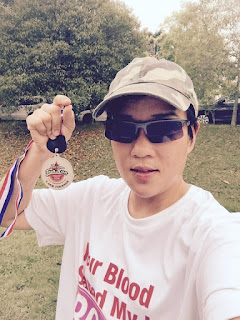 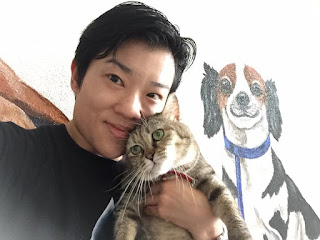 Chilling out with Scar the Cat at the SPCA shelter after my run. 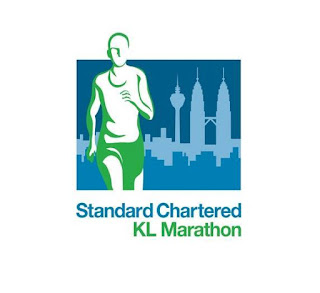 The following Sunday, I ran 21km in the Standard Chartered KL Marathon without getting distracted by birds or wildlife, because we ran in the middle of the city.
Truthfully, I hardly felt the boredom or fatigue of running for over 3 hours, since I had some good audiobooks on my little MP3 to keep my mind occupied. 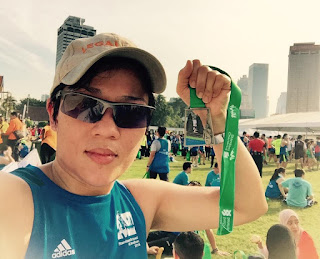 I felt quite pleased with my Finisher's Medal, although my finishing time was less than stellar, because I managed to raise quite a tidy sum for a good cause. 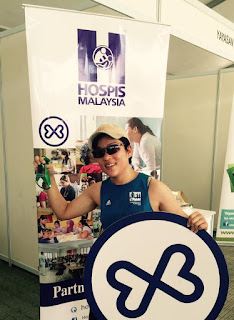 I took the opportunity to have my photo taken at Hospis Malaysia's booth... 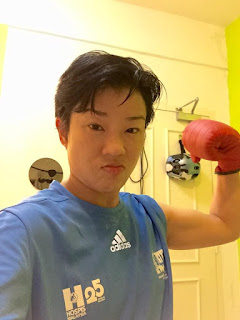 ... and I received a special souvenir t-shirt for succeeding in raising more than RM500 for my chosen charity. I took this photo at home for the benefit of a friend who wanted to know what our souvenir shirts look like. The scowl, gun show and boxing glove are, of course, gratuitous. 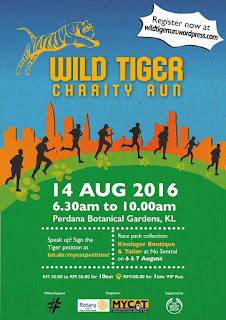 I  had also registered for the Wild Tiger Run for tiger conservation, which took place last Sunday, 14th August, but found that I was still unable to put any weight on my left ankle on the morning of the run, and sadly had to bail out. 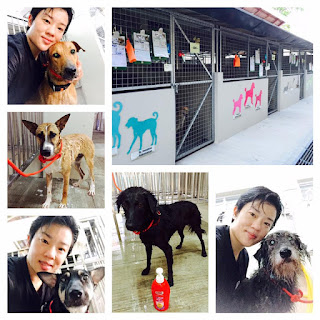 However, my ankle wasn't bad enough to stop me from going to the SPCA shelter to bathe and tickwash dogs. 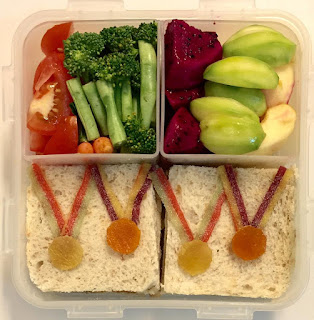 And as is my usual fashion, I made myself a lunchbox of little vegan medals on Monday, as a nod to the 2016 Summer Olympics, flawed though it may be, and to my recent small haul of finisher's medals in road races, mediocre though my performance may be.
I will probably never win any medals for speed and outstanding performance, but that won't stop me from participating in future road races and running for good causes. I may be a half-assed athlete but at least I know I am all heart when it comes to fundraising and volunteering.
Posted by ~CovertOperations78~ at 18:26 No comments:

A Bento Shoutout to Elephants on World Elephant Day

My bento for World Elephant Day 2016.
• Support a worldwide ban on the ivory trade.
• End the exploitation of elephants in the entertainment and tourism industries.
• Keep habitats intact and biologically diverse.
• Develop better ways of reducing human-elephant conflict, esp in agricultural zones. 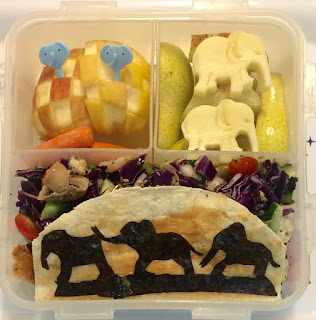 A Roar of Support for Tigers 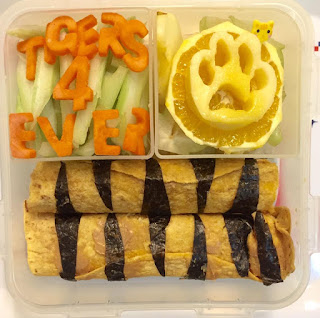 This is my vegan Tiger Bento in honour of International Tiger Day.
(Top left: Celery and carrots.
Top right: Apples, starfruit, orange slice and mango pugmark.
Main compartment: Curry-flavoured wraps filled with Ikea veggieballs scrambled with vegan sambal belacan. Nori stripes affixed to wraps using dabs of palm oil-free organic peanut butter.)
July 29 was International Tiger Day.
Here are a few things we can do to protect tigers and stop wildlife crimes:
1. Do not consume or purchase wildlife or wildlife products.
Deer and wild boars are the favoured prey of tigers. Consuming these species means less food for wild tigers and increased risk of human-tiger conflict.
2. Stay away from tourist attractions that exploit wildlife.
'Tiger selfies' encourage the speed-breeding and abuse of tigers.
3. Report wildlife crimes (in Malaysia) to the 24-hour Wildlife Crime Hotline at 019 356 4194.
4. Learn more about tiger conservation work in Malaysia and sign the petition at https://www.change.org/p/no-more-dead-tigers/u/16361189.
Posted by ~CovertOperations78~ at 12:29 No comments:

Star Trek: Beyond is probably the best movie I have watched so far this year. 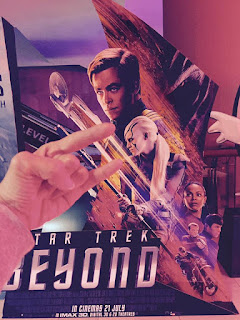 And so I felt I had to honour it with a bento. 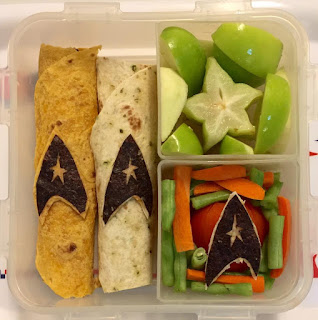