I received the keys to my apartment last month right after the inauguration of Kedai Jalanan, and have been (predictably) spending most of the last 3-4 weeks cleaning up my apartment and moving in. I could not have done it without the assistance and companionship of some very amazing friends -- Serina, Shalan, Shekin, Atan, Karen, Nicole and Joe, who all came over on different days to help me with different tasks. It has been a tremendous journey. 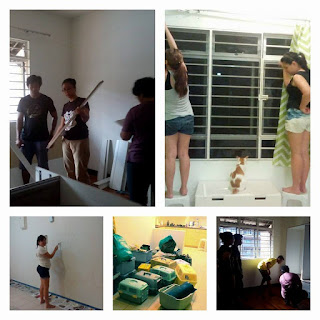 The SPCA has hired several new Animal Welfare Officers, and I got to be friends with two of them, Rohan and Kiumars. It's interesting that after being an SPCA volunteer for 19 years, I am now seen as a source of institutional memory. Still, I am always ready to help, and it is good to get to know the youngsters and learn what motivates them to work for non-profit organisations. 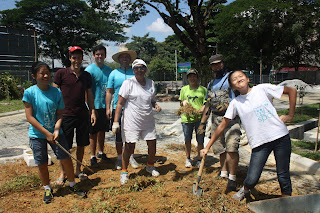 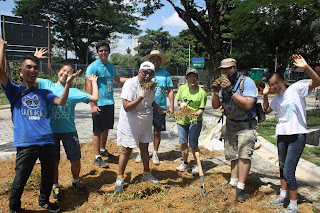 On 3.5.2015, my friends who work at the SPCA sent out an urgent appeal for volunteers to re-turf the yard of the new shelter premises. It has been paved with water-permeable paving and we need to plant grass in the bald spaces in between the paving tiles, and so I sent out a Facebook appeal for help. Shantini was one of my friends who responded, and she brought along her young couchsurfer, Ludovic, who spent many hours helping us in the sweltering heat on 4.5.2015.
(Photos courtesy of Ludovic. He is the one in the brown polo shirt and red cap, and I am the one in the lime green shirt and camo cap) 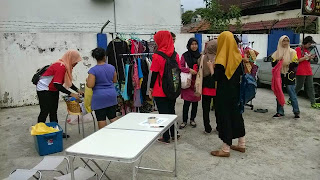 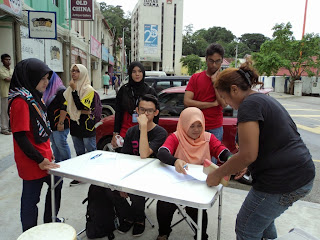 When my friend Lin Idrus invited me to help her with Kedai Jalanan, I was only too glad to. Although she and her students did most of the work, I did help to publicise the project, collect and sort through donations, transport donated items and draft the basic Curriculum Vitae form we would be using to help our homeless friends find better employment. 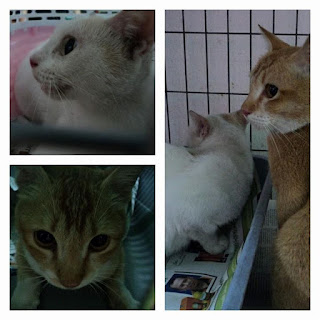 One of my goals at the start of the year was to get all the Mayang Oasis food court cats spayed and neutered before I move to my new home. This was completed in May when I got the (for now) final two food court cats, Fenton (ginger) and Arwen (white), neutered and spayed respectively. They have since been ear-tipped and released and they are doing very well in the food court. They are regularly fed and treated kindly by the food court workers and customers, and I just need to drop by once or twice a week to check on my TNR cats. 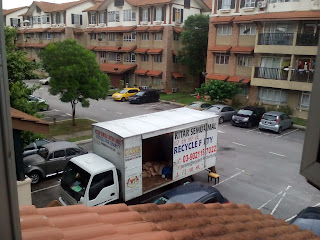 One of the first things I did when I inspected my new apartment was to make a list of things I did not want but were in good condition and to call up a charity organisation to collect the unwanted items. Persatuan Amal Seri Sinar agreed to pick up my donations, and apart from the furniture, appliances and other items I cleaned up for their removal and redistribution, I donated to their scholarship and education sponsorship fund and gave money to their truck driver and driver's assistant who came to pick up the preloved things. The driver seemed pretty blase about the tip, but his Burmese assistant was positively beaming.

The Kedai Jalanan volunteers and I had tea at the Malaya Hainan Cafe after 'closing shop' for the day, as I had detailed in my last blogpost. 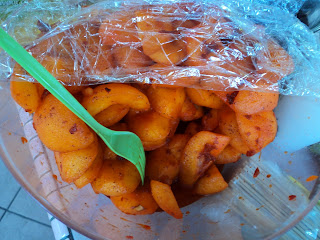 I had raved about Leena's pear compote which she brought to Serina's picnic gathering at the Lake Gardens, and learned that it was basically a combination of peeled and cut Chinese pears, and red preserved fruit. 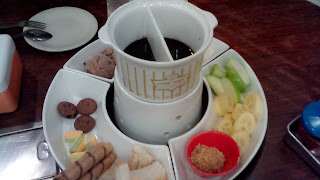 We celebrated Mother's Day by going out to dinner at Hometown Steamboat, a popular steamboat place near the parental home, which we have not previously been to. We even had a chocolate fondue for dessert. 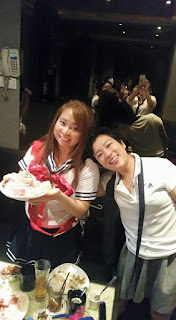 My best friend Nicole has the privilege of being born on May 1, a national public holiday, so we always get to do fun stuff until late on the eve of her birthday. This year, we had a party at Neway Karaoke in Puchong, which I have previously never been to. It was quite possibly the most Chinese thing I have ever done ;)
We had a great time, ate way too much food and sang ourselves hoarse. 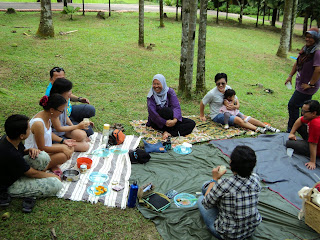 Although I live and work mostly in KL, I don't recall ever having really spent time in the Lake Gardens as an adult. I passed through once for the Terry Fox Run but have not seen other parts of the park. And of course, like many lawyers, I can recall only drinking at the Lake Club but not walking through the park. Serina's picnic potluck gathering was a good way for most of us city dwellers to appreciate the beauty of the KL Lake Gardens. 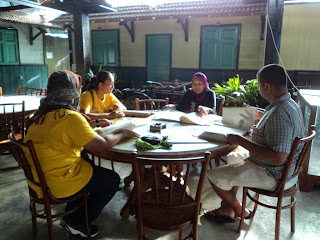 As previously described, I patronised Malaya Hainan Cafe in Jalan Panggung for the first time in May after the inauguration of Kedai Jalanan. 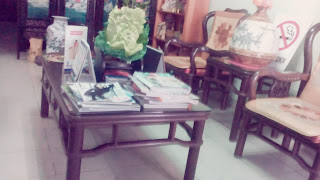 Another place I went to that I have never previously been was, surprisingly, the dental surgery near my previous rented home. I had a horrendous toothache on a Thursday night and had to take the day off on Friday and have a broken molar remove and a frightfully expensive root canal done at Woo Dental Clinic in Mayang Plaza. The waiting room looked like someone's home. I've never been in such a home-y clinic in my life. Service was efficient and professional, though.

In May, I learned:
(i) How to plan, prepare for and set up a pop-up street store.
(ii) How to perform the Valsalva Manoeuvre to get water out of my ear (be careful not to blow too hard or you could damage your eardrums);
(iii) How to apply the theoretical knowledge I have on house painting and home repairs. 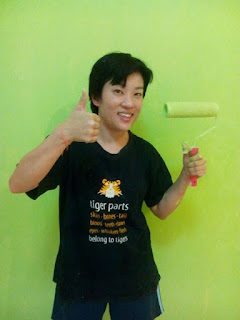 In May, I removed over 40 items for recycling, approximately 70 items for donation to Kedai Jalanan, and around 10 books for The Revolving Library.

By July 2015, I plan to change this goal to only 50 items, as I now live in my own apartment and need very few things and keep and accumulate even fewer.

I gave up snacking in May because of my carbon guilt over consuming more food than is necessary, when I may not be necessarily hungry. So now I restrict myself to 3 square meals a day and only drinking water in between. This had the desirable side effect of bringing my weight down 3 whopping kilograms in just one month. This is definitely a habit I want to keep up -- for environmental, financial and health reasons. No doubt I may occasionally suffer lapses but good habits aren't 'all or nothing'. You fall off the wagon, you pick yourself up and you try again.
Posted by ~CovertOperations78~ at 21:34 No comments: