Letter to the Editor: End Deforestation Before Embarking On Tree-Planting Campaigns 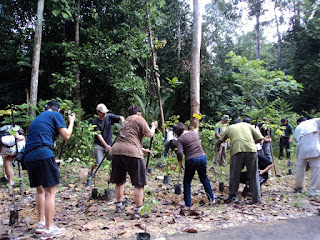 It is difficult for environmentalists not to respond with scepticism to the Prime Minister’s 100 Million Tree Planting Campaign. While it is heartening to see that the government acknowledges climate change to be a real and imminent threat, the actions of those in power thus far are not consistent with environmental protection, climate mitigation, or biodiversity preservation.

The PM claims that Malaysia has forest cover of 55.3%, which is wildly inaccurate as it includes plantations, which consist of monoculture crops that rely on large quantities of synthetic herbicides, insecticides, bactericides, and fertilisers in order to thrive. The UN Food and Agriculture Organisation reported Malaysia’s primary forest cover to be at 18.7% in 2010, and it has decreased since then. Tree cover is not the same as forest cover, and not everything that puts out roots and leaves is automatically beneficial to the environment. Old-growth forests store carbon for centuries, whereas plantations constitute net emitters of carbon due to the disturbance of the soil and degradation of the previous ecosystem. Plantations cannot be classified as forests, and they are in fact a direct threat to forests due to the fact that forests are cleared for agricultural expansion. For the sake of scientific accuracy and for this massive tree-planting campaign to be an actual climate mitigation strategy, this inventory of 100 million trees must necessarily exclude plantation trees.

While a tree-planting campaign of this magnitude sounds good in theory, the Perikatan Nasional government does not have a credible environmental track record. Just days before the announcement of the 100 Million Tree Planting Campaign, the Kedah government proposed to log 25,000 hectares of the Ulu Muda forest, which is a vital water catchment area and biodiversity hotbed. Further, there are recent reports of logging in the vicinity of the Jerantut Tambahan Forest Reserve and Lesung Permanent Forest Reserve, among other forest reserves. Things in Pakatan Nasional controlled states are not much better, as the Selangor State Government is adamant about proceeding with its plans to degazette and destroy the Kuala Langat North Forest Reserve. Based on these precedents, it is difficult to believe that the government is in any way committed to protecting the environment.

Planting trees make up only a partial solution to the effects of deforestation. A better, less expensive, and less quixotic option would be to end or at least reduce deforestation. Let us remember that mature trees offset far greater amounts of carbon dioxide than young trees. A tree will only begin to be effective in absorbing carbon in its tenth year, so planting trees as a climate mitigation strategy is not going to produce the results we want to see within our lifetimes. Intact forests provide many ecosystem services that newly-planted trees can’t. Researchers from 15 countries published their findings in Nature in 2014 that old trees not only store carbon and prevent it from escaping into the atmosphere, but actively convert carbon dioxide from the air into their trunks, branches, and leaves, a feat that is not replicated by young trees. Currently, the Earth’s forests and soil absorb about 30% of atmospheric carbon emissions. Mature and biodiverse forests store carbon, recycle water, prevent erosion, harbour biodiversity, and improve air and water quality. When trees are cut down, years of a forests’ stored carbon are released back into the atmosphere. When we plant forests, we gain some of the benefits that forests provide, but it takes decades to grow a healthy forest, and humanity is running out of time.

I can see the appeal of a massive tree-planting campaign to those in power. It creates the appearance that the government is doing something proactive to protect the environment, and also creates public relations opportunities for corporations, particularly those in polluting and destructive sectors such as construction, property development, and oil and gas, to perform a corporate social responsibility exercise to improve their image. Before we embark on this ambitious and expensive campaign, however, it would be good to know what plans the government and its corporate partners have beyond planting trees. Planting millions of trees is the easy part. Tracking these trees and ensuring the young trees’ survival is the challenging part. Mega tree-planting efforts in India, Turkey, and Ethiopia record the number of saplings planted, but are unable to provide accurate and adequate information about the survival rate of these saplings. What makes us think that Malaysia is going to be the exception, given our society’s poor maintenance culture? Tree-planting campaigns are also a cop-out for governments and corporations because it is a way of avoiding having to address more serious environmental issues such as deforestation, pollution, mining, and other destructive activities.

By all means, we should plant as many new trees as possible, especially native trees that provide food and shelter for native fauna. However, we need to stop pretending that it will solve the environmental problems caused by weak governance, greed, and the prioritising of short-term benefits over environmental integrity. If the PM truly cares about “greening Malaysia” and our trees, as he had claimed, he would start by putting a halt to deforestation and the degazettement of forest reserves.