'Hari Organik' Weekend and other news

My original plans for the weekend were to clean the BOQ on Friday night, attend CETDEM's 'Hari Organik' (i.e. Organic Day) event on Saturday morning and volunteer at the SPCA on Saturday afternoon. But things don't always work out exactly the way we want them to, but that isn't necessarily a bad thing.

As part of my ongoing waste reduction efforts, I found and acted on this great tip from the Recycle This website which prevented Jake's stale tortillas from being consigned to the compost pit. I made tortilla chips from the dry and otherwise unappetising tortillas in our fridge on Friday night. I have managed to salvage a sizeable and clean pizza box from the office after one of our pizza lunches, and will be transforming it into a solar oven, so the next batch of tortilla chips can be baked in my solar oven. (I sometimes wonder if I should be going out on Friday nights more.)

On Saturday morning, as planned, I borrowed Jake's bike and helmet (my T-Bolt is at the parental home) and cycled to the SS2 junction to meet Vegan Eugene after his tennis match. I had suggested cycling to CETDEM's Hari Organik event as it was less than 10km away, and I felt that putting another car on the road (even if carpooling) would defeat the purpose of Hari Organik.

The objectives of Hari Organik are to encourage consumers to purchase and consume local produce, to help new organic farmers/traders establish their market, to promote healthy and environmentally-conscious living, and inculcate community spirit. Visitors and consumers were encouraged to bring their own shopping bags and food containers to the event to minimise packaging and waste.

So, in the punishing and relentless heat we pedalled, dodging heavy traffic and potholes to get to the playground in Jalan 19/22. I am glad Vegan Eugene was with me, because I would never have been able to locate the event grounds on my own.

As we were pulling into the playground, we saw Anthony and Mr. Gurmit leave the event grounds (a bit of a blow to me, since I had wanted to talk to Anthony). We locked our bikes to a signpost and almost immediately began bumping into friends.

James C. came up to us with his friend Mr. Khoo and ribbed us about the bikes. Then we met Mohala, who had set up a booth to sell forest portraits. At the same booth, we met Vegan Eugene's friend Lavanya. Moseying around, I bumped into Sheela P., Chung Lu, Yao, Petri, Natasha and Edo. I find it remarkable that people from various diverse non-governmental organisations still move around in the same circles. Hundreds of people at an event and I know at least 10% of them. 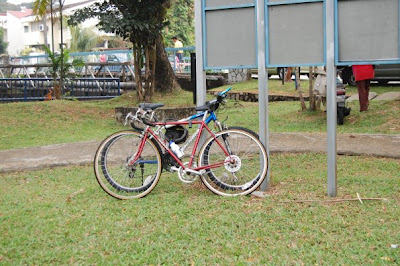 I forgot to bring my bike lock so Vegan Eugene had to lock my bike with his. 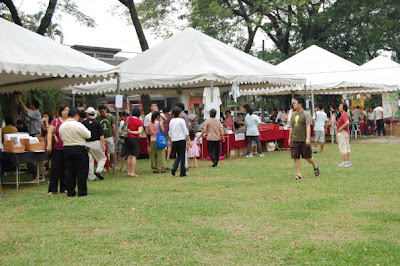 Booths selling local organic produce having a busy morning. I bought trail mix and sugarcane juice for Eugene and myself, and fruit and vegetables for the parents. 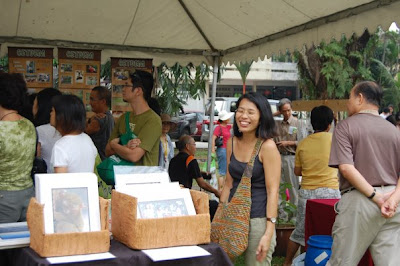 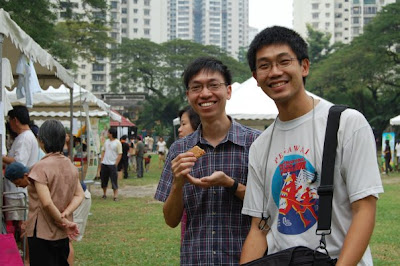 Hello! What a pleasant surprise! It was good to see Chung Lu and Yao's friendly faces. 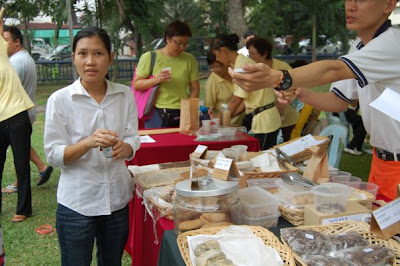 Organic cookies for sale. I bought peanut and oatmeal cookies and apple crumble (which, true to its name, crumbled into a gooey (but still delish) apple mess in its container after being bounced about in my backpack) for Jake and Jess. 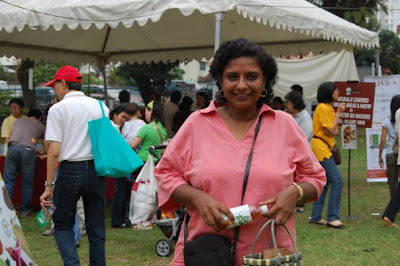 Sheela is going to cook someone a yummy organic dinner tonight! 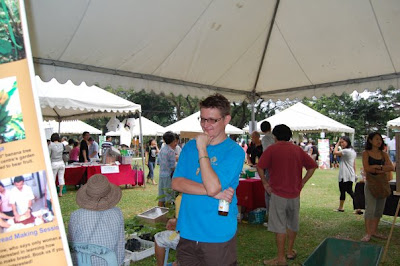 Petri pretended to concentrate on a banner when I told him I was going to take a photo of him. Come on, give us a smile, Petri! 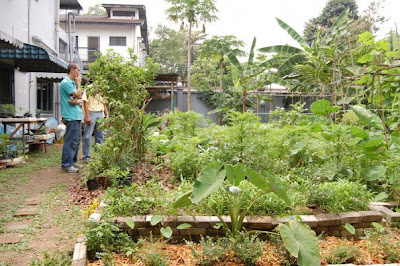 The CETDEM organic garden across the road from the event grounds. 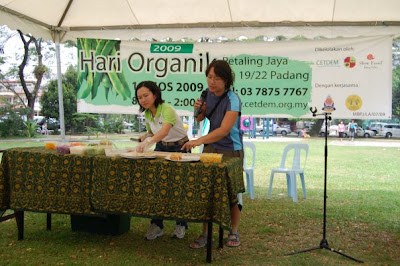 May Leng from Green Meadow giving a demonstration on preparing vegan food. We learned how to make yummy vegan spring rolls, seaweed handrolls and tofu pockets. Drop me an email if you would like the recipes. 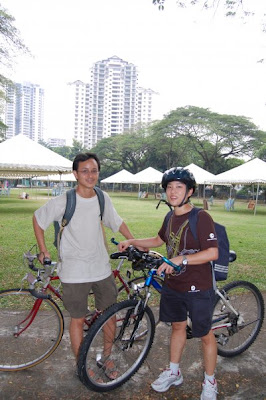 Eugene and I getting ready to go for lunch after the event, at 1600h.

I had wanted to leave before 1300h in order that I may still go to the SPCA to volunteer in the afternoon, but we ended up spending more time at the Hari Organik event than I had expected. In addition, Jake had advised me against going to the city centre due to the police crackdown against the anti-Internal Security Act protestors. I was informed that the roadblocks had caused traffic jams lasting up till an hour or more. Considering the impracticality of going to the SPCA that day, I decided to stay on at the Hari Organik event and help out.

Eugene and I helped our friends pack up and carry their goods to their vehicles and to the CETDEM community centre. Our friend Edo gave us some tapioca to take home, and another friend from CETDEM gave us glutinous rice rolls. We helped to tidy up the event grounds (which was really very clean as hardly any waste was generated) and chatted with our friends before finally leaving at 1600h for lunch.

We weaved in and out of traffic and through the back alleys, with our now very heavy and ungainly backpacks and the tapioca poking into our backs as we rode over bumps, until we reached Giant Bowl, our favourite restaurant at the moment. We had a late lunch of noodles and chilled out for a bit before we cycled back to Eugene's place.

I played with Eugene's cat, Pearl, and we watched some YouTube videos before I went home. As it was still warm outside, I gave the Rowdies a bath. Pixie practically deafened me with his wailing, but the other cats behaved really well.

I met up with fellow blogger Keats on Saturday night, to discuss the possibility of conducting a Green Living programme for the Sunshine Ladies, a team of amazing volunteers who carry out enriching activities at a welfare home for the disabled. Keats took me out to dinner at the Decanter. I got to see Keats' lovely home, meet her husband and daughter, and play with her handsome lab retriever, Robbie. (Thank you for having me, Keats. I really appreciate it.)

Sunday was spent back at the parental home. I cleaned the house, checked the cars' oil and radiator water levels, washed and walked Amber and Chocky, spring-cleaned my bedroom and cooked the tapioca I had been given.

I may have missed the opportunity to help out at the SPCA this weekend, but at least I had the pleasure of spending time with my friends.

CO78,
How do you turn a tuna loving cat into a vegan? Feed him lemongrass...teeheehee...
It's very heartening to note people are more aware of environmental issues - recycling, cycling instead of driving etc. Our hats off to you! Err...care to send us some yummy tortilla chips? Mama has an avocado dip recipe that goes well with that. purrr....purrr....

My eldest girl Chloe loves organic lettuce and celery. I am convinced she can distinguish organic from conventional produce. As for tortilla chips, although homemade ones are not as tasty as store-bought ones (unless you add BBQ powder etc), a pack of 10 pcs of tortilla bread costs only RM2.00 or so, and 3 pcs generates about the same amount of chips as a RM2.90 foil pack of store-bought chips would. Less packaging, less preservatives, higher savings. What's not to like, eh, kitties?

Hi ~Covertoperations_'78~, I WAS there too and came home delighted with so many good buys!- okra, brinjal, raja ulam,spearmint plants, seeds, vermicast,food. And not forgetting the rejuvenating cane.That's the stick to massage, and wallop to get my circulation going!! They say, the early bird catches the worm?? He! He!

I look forward to more events by CETDEM months down the road. Well done!
Great to meet you in person.You're welcome to be my guest again. Robbie certainly needs someone like you to have a good tug o'war!

Thanks Keats! Robbie is such an awesome macho dog! He looks like he needs a good long run every day.

I saw people trying out those canes. Looks fun but no point in me buying something I could make/salvage/pick up myself. I arrived a little late. Most of the 'softer' veggies -- tomatoes, lettuce etc -- were all sold out.

Next Hari Organik will be in early Oct!

Let me know how that solar oven goes! I'm really curious about that.

And if you ever need a customer for tortilla chips... call me!

Thanks, Ellen! Solar oven -- foil bits all done, waiting to chance upon black construction paper because I'm too much of a paper-stingy treehugger to go out and BUY black paper for a project that may or may not be successful!

And yes, if and when it does work, I'll send S'mores and tortilla chips your way, all cooked to perfection by our dear helpful Sun! I will call them: "Ra Chips"!

Good name. You can become an entrepreneur, make millions and be queen of green around the world!