Our first Open Day was held at the MNS HQ itself in January 2008, and it was such a success that we have since held 3 other Open Days -- at FRIM, the Shah Alam Agricultural Park and at Taman Lembah Kiara. We used to only have annual Members' Days in out-of-city-limits locations such as the Boh Tea Plantations in Cameron Highlands, but sometime in late 2007, the Committee decided that in the interests of public education and environmental outreach, we would conduct Open Days where members of the public and local community could participate in nature and conservation-related activities and have a sampling of the activities our Special Interest Groups have to offer.

This year also marks MNS' 70th Anniversary, and so it was appropriate for our Open Day to adopt the theme of "70 Years of Conserving Nature, Celebrating Life". Our Open Day this year focused on the call to cherish and protect our country's increasingly threatened wildlife and habitats.

As usual, we offered guided nature walks, the Single Rope Technique exercise, exhibition booths, campaign and petition booths, Arts and Crafts, face-painting stalls, activity booths by most of the Spesh Interest Groups and booths by partner organisations such as MYCAT and Wild Asia to bring home the urgency of saving our wildlife from loggers, poachers and infrastructural/agricultural expansion.

We also introduced new activities this year, including a Scavenger Hunt, a Storytelling Session (by my highly talented blog buddy Keats) and Stream Ecology sessions (conducted by Hashimi).

Since Lil, our preferred Master of Ceremonies, was indisposed due to wrist injury, I replaced her as the emcee, which wasn't an onerous role at all considering that I had offers of help from Cindy, Bernie and Ilyas. My other roles were in the planning and preparation of the Scavenger Hunt, photo exhibition, Green Living booth activities and Nature Quiz, all of which were finalised and running smoothly by the morning of the event, thanks to the help of competent volunteers. 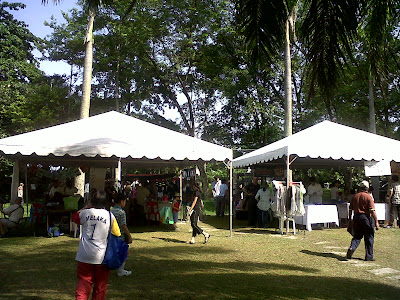 The MNS Selangor Open Day was literally a walk in the park for visitors. 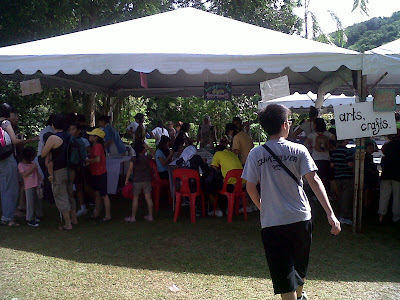 A sizeable crowd had gathered at the Arts and Crafts booth by mid-morning. 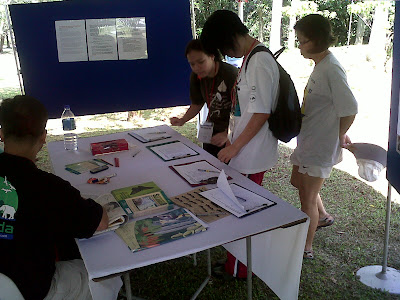 Interested members of the public learning more about our campaigns to stop the conversion of rainforests into latex timber clone plantations. 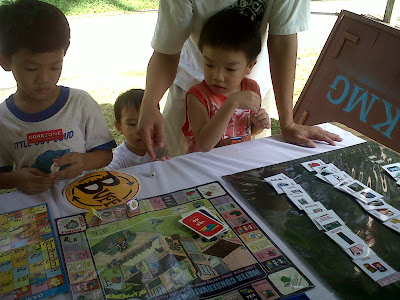 A young family had fun playing the Water Conservation board game at the Green Living booth. 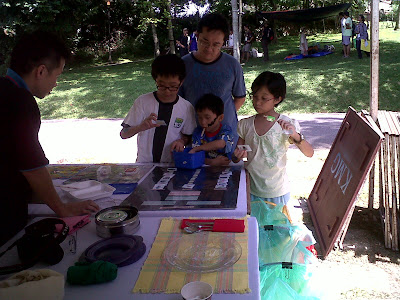 Ben10 and family try their hands at the Green Living 3R Board Game. 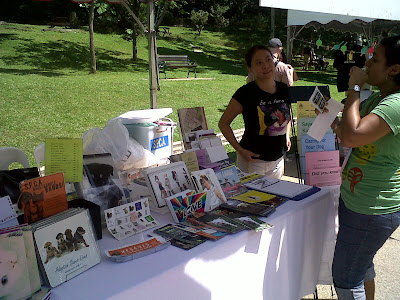 The SPCA was invited to set up a booth as a partner organisation, but unfortunately City Hall would not grant them permission to bring in animals for adoption. The gang made a tidy sum from merchandise sales and donations, though. 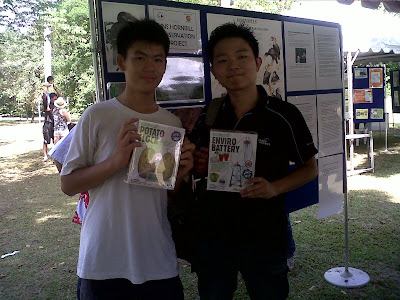 I didn't get to participate in as many activities as I would like to, as I was stuck at the emcee booth making the announcements. I conducted a nature/conservation-oriented spot quiz around 1030 hrs and gave out prizes sponsored by the various Special Interest Groups. The Green Science Kits sponsored by the Green Living SIG were the most coveted prizes of all. These two young men were all smiles after winning a Potato Clock and Enviro Battery kit respectively. Well done, boys! Just add vegetables and water, and - voila! - you have your clocks and batteries! 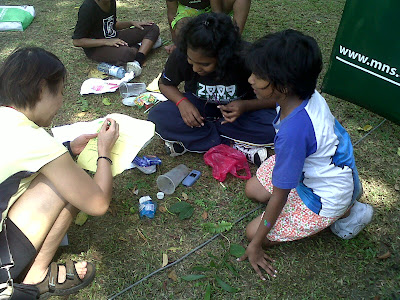 32 teams registered for the Scavenger Hunt, which was flagged off at 1100 hrs. Teams had to look for and bring back (or photograph), among others, an epiphyte, a skeleton (animal or plant), a soil-improving plant and something which has no use in nature. One of the judges is seen here grading a team and awarding points for the correct items brought back. 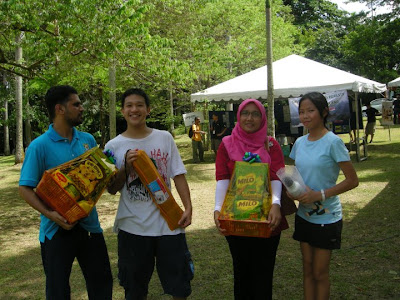 Two of the Scavenger Hunt teams with their spoils! (Photo credits: Christopher Leo) 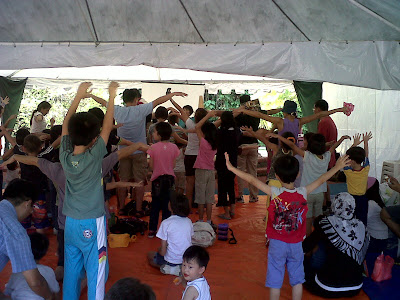 Keats got her audience involved in an interactive storytelling session about habitat destruction. Children and their parents are seen here playing out the role of the emergent canopy in a rainforest in Keats' original work, "Paradise Lost". 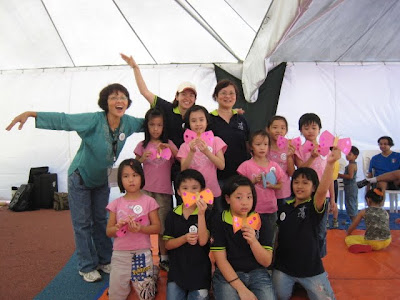 Keats and her young fans with the butterfly crafts they made using reused and salvaged materials. (Photo courtesy of Keats) 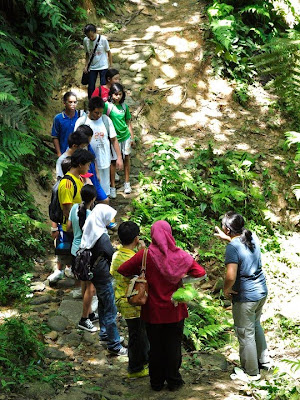 Happy trails is what you get when you go on a guided nature walk with our Nature Guides. (Photo credits: JC Tan) 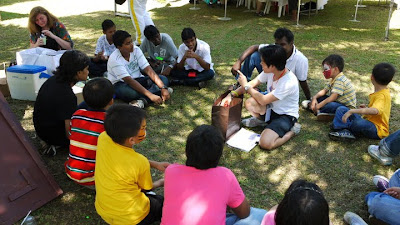 I conducted a Nature Quiz for the children of Compassion Home. Many thanks to Ellen and the volunteers who brought the children to participate in our Open Day! (Photo credits: Alex Foong)

The event was officially over at 1400 hrs and Vegan Eugene, Mary and I were among the last to leave after tidying up, no thanks to the fact that Vegan Eugene spent hours trying to locate an LCD projector bag that didn't exist. The Cave Group gang was still around practicing climbing techniques around 1500 hrs, so the three of us accosted them and asked for the opportunity to do the Single Rope Technique. 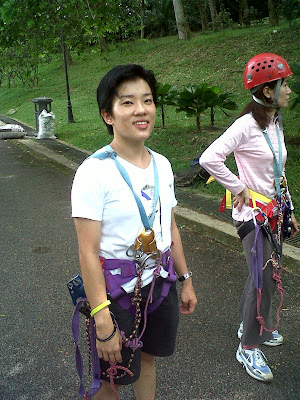 The tighter the harness, the easier it is to climb. 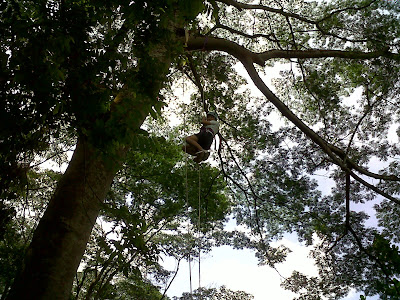 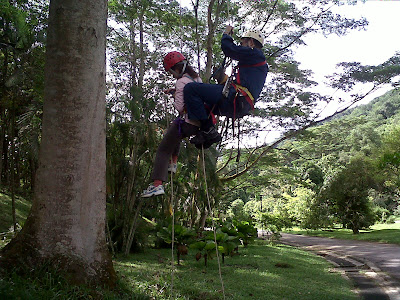 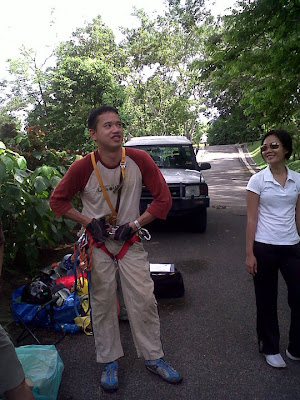 SH, one of the senior cavers, all kitted out to try out some new climbing and abseiling techniques. Cavers have the most fun. I really want to sign up for the Basic Caving Course next year. I've been putting it off for too long.

* Join the Malaysian Nature Society and lend your voice to the protection and conservation of Malaysia's wildlife and green lungs!

* Learn more about Selangor Branch and find out what our upcoming activities are!

* Sign the petition to Save The Belum-Temenggor Forest Complex!

* Sign the petition to Save Peninsular Malaysia's Rainforests from conversion into Latex Timber Clone (LTC) Plantations!

Trees have no suffrage. We do! Please lend your voice and vote for better implementation and enforcement of conservation laws. We share the fate of our natural environment. A healthier Planet means a healthier human population. Thank you for your support!

We had a great time, thanks! And we're looking forward to seeing you Sunday.

PS can you introduce us to Hashimi via email???

CO78,
Wish we could be there too! Would the City Hall dare say "No" to my Mama? They should have allowed SPCA to bring the animals for adoption. They should feel guilty for killing so many "stray" animals in the first place. har har har *evil laughs*

Dear Ellen, Au and Target,
Glad you had fun! Am so looking forward to Sunday. The pinata I made is as gaudily hideous as it can be! Like a gay pride hanging flowerpot! The kids will love it! Ha ha! Will email you Hashimi's info.

Truer words have never been uttered! You are a very wise cat indeed. City Hall was involved in the destruction of countless animals, not all of them stray :( It's time for transparency and accountability. Whose brainwave was it to send contractors out to shoot dogs, rats and crows, and who are these contractors?

Hey Brad, I bet you could climb up that tree faster that I could.

Wow, that so looked like fun! And I love that pix of you hanging in the tree!! My fav pix of the lot!!!

Thank you, dear Pat! We raised so much money from the sale of your books, ha ha! Next Green Living outreach event will be practically sponsored by Pat and Chuan!

I loved being up in the tree, too. The cavers won't tell me how they got the rope up there in the first place. They said they hired a monkey (paid in ice cream cones) to put the rope over the branch for them.

Thanks for your kind words, Ee Lynn. It was your request that got me there. Time flies - have been a MNS member for about 19 years now!It was a fun day and well organised. Kudos to all.

Thanks, Keats! It was so good to have you with us. You did a great job. Ilyas told me he got really excited listening to your story, LOL!

super cool!!! i bet u had a very VERY good time there~!

I am just back from a week's cruise to Alaska. I think you might be encouraged by the cruise ship operators' gestures towards preserving the environment. Their cooperation might have been less than voluntary, encouraged by substantial fines and recent limitations on the number of ships allowed at the popular glaciers, but it is reflected in some tangible changes on board, such as an emphasis on using and collecting recyclables and discontinuance of dumping their waste at sea.

It's great to have you back. Sea travel is actually more fuel efficient than air travel or road travel, as water offers less resistance than road travel. However, cruise ships, with all their energy-guzzling bells and whistles, use about as much fuel as air travel. I believe pressure from consumers and environmental lobby groups have resulted in cruise ship operators taking measures to reduce their energy, water and resource usage in recent years. Looking forward to your blogpost on your Alaskan cruise.