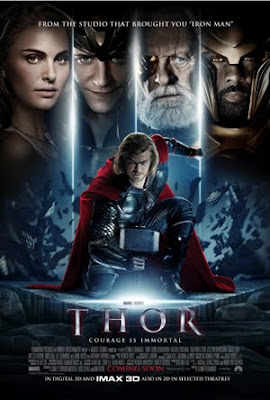 Superhero movies generally follow one of several tried-and-tested formulas. The initial part of the movie normally revolves around one of three plots, namely:
(i) The superhero is of extraterrestrial or mutant origins and is imbued with superhuman powers from the start, and later decides to use this power to the benefit of the human race, unworthy souls though we may be. (Superman, Hellboy, Thor)
(ii) The superhero acquires special powers through some accident, extraterrestrial encounter, exposure to radiation or scientific experiment gone awry, and spends a significant amount of time getting used to these powers before he is able to use these powers to his advantage. (Spiderman, Hellblazer, The Incredible Hulk, Wolverine).
(iii) The superhero is a mortal with no super powers and is equipped with nothing more than a superior intellect and the resources to build fantastic gadgets. He normally also possesses crime-fighting skills befitting SAS commandos and martial arts grandmasters. These superheroes are usually also playboys and heirs to untold wealth. (Batman, Iron Man, Green Lantern).

The later part of the movie usually revolves around the superhero’s efforts to incapacitate the evil machinations of a super villain or to stop a chain of events with particularly dire consequences on Planet Earth or the human race. There is usually also a romantic subplot involving the superhero’s efforts to conceal his alter ego from a mortal love interest, which is usually successful, proving that a mask, a pair of glasses or a different hairstyle is often all you need as disguise in the fantasy world.

Often linked to this subplot is another subplot revolving around the superhero’s weakness, be it the love interest, who is susceptible to being kidnapped, or an external object or resource capable of compromising the superhero’s powers (e.g. Kryptonite).

“Thor” doesn’t deviate from the standard superhero movie formula. What makes it worth watching, then, apart from the fact that it has breathtaking special effects, and a physically appealing protagonist?

“Thor”, to me, is more than a movie about using one’s special powers for the greater good. To me, it isn’t even a movie extolling the virtues of humility and grace. It isn’t a movie about the protagonist’s journey of self-discovery and self-realisation. It is a movie about the triumph of friendship and loyalty over treaties bound by lesser ties. It is a movie not just about loss and sacrifice, but also about teamwork, responsibility and leadership. Most importantly, to me it carries a strong message about the necessity of circumventing bad laws, and the courage to defy weak, corrupt and oppressive leaders. The God of Thunder isn’t the only hero in this comic book adaptation. To be honoured and applauded are Heimdall the valorous gatekeeper, and Thor’s stout-hearted companions, Volstagg, Fandral, Hogun and Sif. And this is what makes the alliance of warriors in “Thor” heroes after my own heart.

The past week has been a family-oriented one, partly to make up for the fact that I spend so much time on work and volunteer commitments. I had spent the last two Saturdays at the SPCA as usual -- bathing and tickwashing dogs, cleaning the catteries and kennels, drafting press releases, training new volunteers, and counselling potential adopters and people who wished to surrender their animals. There has been many reports on animal abuse and cruelty cases in the media lately, and so we have our work cut out both trying to engage the authorities and trying to placate the outraged and emotional public. Seems to me like no one else knows how to draft something that sounds neutral and rational and which offers solutions. Everyone else seems to think that being dramatic, emotional and accusatory is the order of the day. I have been driven to the point of exasperation on many occasions.

With only 3 weeks to go until the Malaysian Nature Society Open Day, there are also volunteers to be recruited, official approval to be obtained, equipment to prepare and prizes to source.

I had spent Mothers’ Day cleaning the parental home and treating Covert Mum to a facial session. I had later taken the parents out to a nearby cafe for dinner to avoid the crowds in downtown restaurants. I took Friday off to take the parents to watch “Thor” and to have lunch at one of their favourite restaurants before going back to the office in the evening to clear a few files and complete some research. My canine and feline children, including the Project Second Chance rescues, are doing well. For these small blessings, I consider my life fortunate beyond measure. 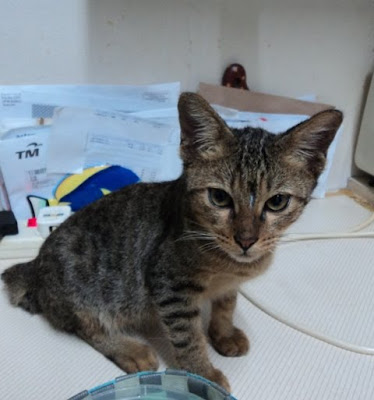 Oscar had a bad case of mange when he first came to me. After undergoing 3 courses of Ivermectin, he is now a handsome little heartbreaker. 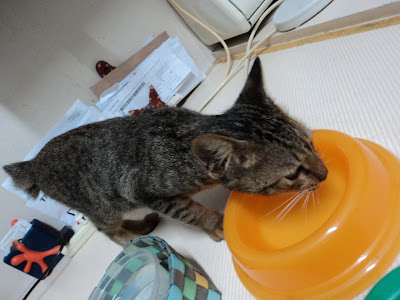 Oscar has been vaccinated, dewormed and given 2 flea baths. He should be ready for neutering in a month. I hope we are able to find him a loving home. 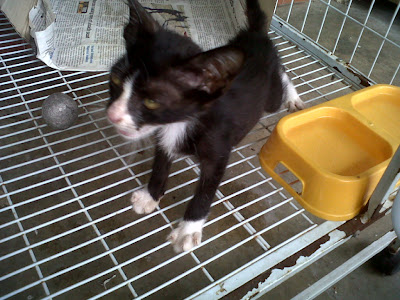 Hopscotch was very sick with worms and fleas when I first found him behind the air-conditioning unit in my office. I had him vaccinated and I treated him for fleas and worms myself. The worst is over, and Hopscotch will survive, although he remains extremely thin. 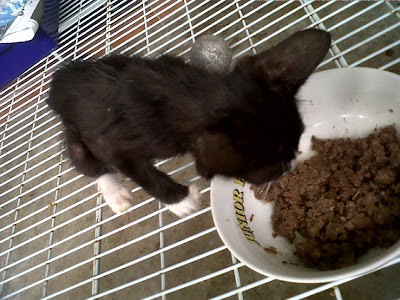 Hopscotch eats 2 bowls of wet food and kitten milk replacer a day, and has consumed his weight in Nutrigel, Liv .52 and pet vitamins, yet he looks positively skeletal. I will need to deworm him again soon. I hope he will gain sufficient weight and strength in a month when I put him up for adoption. 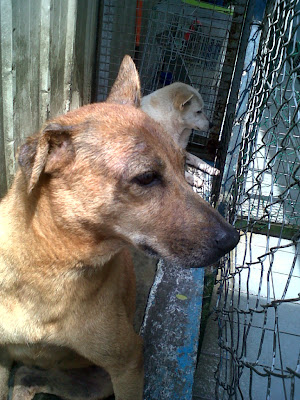 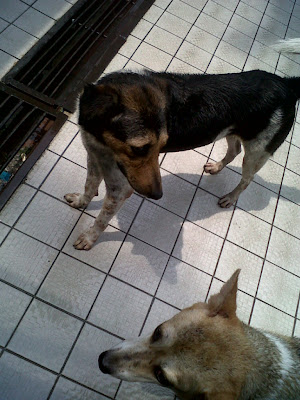 The SPCA shelter dogs find a quiet corner to rest in after their bath. 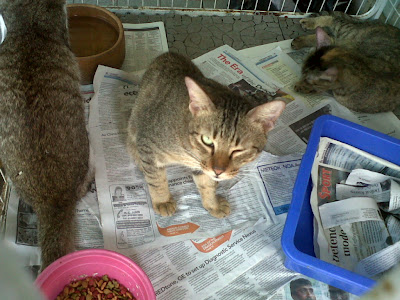 Here’s lookin’ at you, kid. 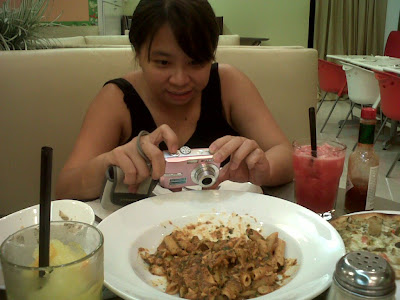 A belated birthday celebration for my buddy Nicole at Marco’s Pizza last night. Nicole attempts food photography after we had started on the penne. 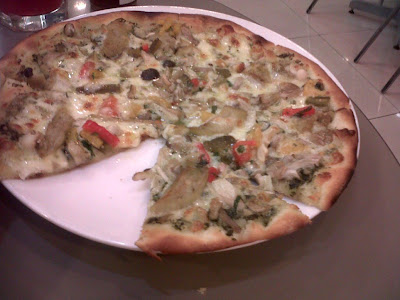 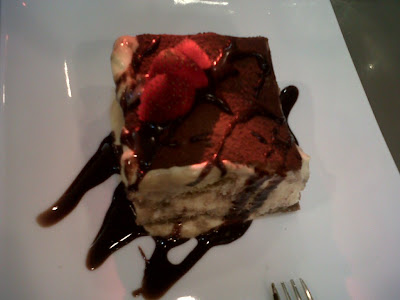 The velvety, rich and absolutely decadent tiramisu, which our birthday girl enjoyed.


Covert Operations, Out.
Posted by ~CovertOperations78~ at 18:31

CO78,
Yummmy tiramisu! Did you save some for Oscar and Hopscotch? purrr...meow!

Dear Kitties-from-Sydney,
Oscar and Hopscotch can't have tiramisu as it has chocolate in it. I gave them wet food with yoghurt instead. Yoghurt is good for reintroducing good bacteria in the gut after vaccination and deworming, and balances out the intestinal flora! Pls spread the word about Oscar and Hopscotch needing good homes. Please ask any friends who are cat lovers and who are interested in adopting them. I will take care of the neutering when they are of age. My e-mail addie is wongeelynn@yahoo.com. Thank you!

Did your mum enjoy her facial treat, E? It was a lovely present, I think :)

And you're right about Oscar: a heart-breaker there!

Dear Pat,
Mum and I both enjoyed our facial session! It's not just for Mothers' Day, it's something we do once every 1-2 months. And no, I don't think much "bonding" goes on there because it's so relaxing that we always fall asleep 10 mins into the facial session! Nice!
Oscar says thank you for the compliment. He is not just handsome, he is also a very good boy.

I hope to catch Thor before it's off the circuit.
I have yet to catch myself snoozing off during a facial session! Yes, I'm relaxed but the sleeping never happens!!
I hope the kitties find a home soon. Have sent mail to friends.

Dear Keats,
Really appreciate you dropping by! Thor is great fun, do watch it. Facials are nice, they are my excuse to get a nap on Sundays.

Postcript to Keats: Thank you so much for helping me try to find a home for Oscar.