April 23 was World Book Day,and I observed it by creating a series of book-themed bento lunches based on my favourite books and authors. Many people have asked me about the illustrations. It's really very easy and quick to do -- I painted the illustrations on flat tortilla using a fine paintbrush dipped in natural black food dye, and then cut out the shapes using a small sharp blade, and baked the illustrations to set the dye.  The blue, red and green tints are done using food writing pens. 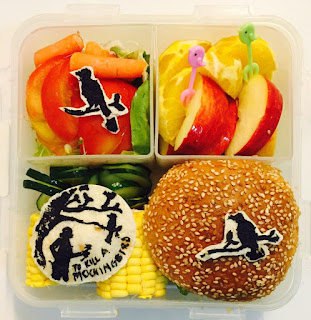 World Book Day Bento #1 is inspired by Harper Lee's "To Kill A Mockingbird". 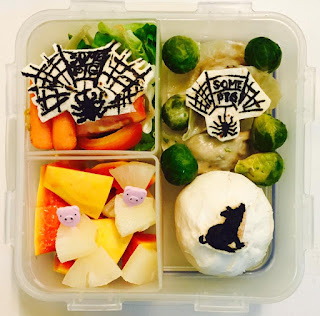 World Book Day Bento #2, inspired by E.B. White's 'Charlotte's Web'. Favourite quote from the book: "You have been my friend. That in itself is a tremendous thing. I wove my webs for you because I liked you. After all, what's a life, anyway? We're born, we live a little while, we die. A spider's life can't help being something of a mess, with all this trapping and eating flies. By helping you, perhaps I was trying to lift up my life a trifle. Heaven knows anyone's life can stand a little of that." 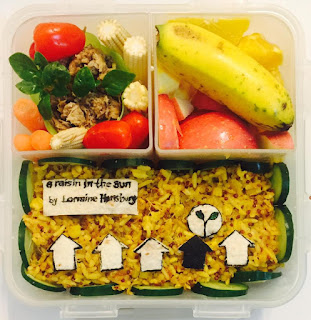 World Book Day Bento #3, inspired by 'A Raisin In The Sun' by Lorraine Hansbury. There's a little 'potted plant' in the top left compartment because gardening is a leitmotif in the book/play. 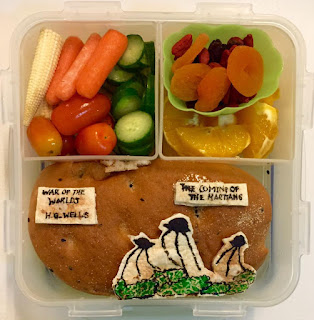 World Book Day Bento #4, inspired by 'War of the Worlds' by H.G. Wells. I am a fan of old-school science fiction, in particular, the works of John Wyndham, Jules Verne, H.G. Wells, Isaac Asimov and Ray Bradbury. My original intention was to feature Wyndham's triffids, but I forgot what triffids look like and ended up illustrating something that looks like the toothy plant in Little Shop of Horrors, so I scrapped it and did the Martian Tripods from WotW instead. 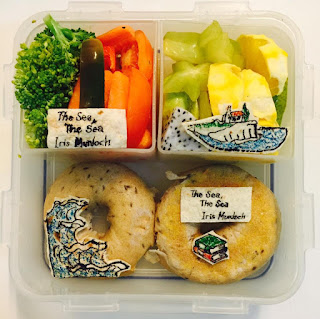 World Book Day Bento #5, inspired by Iris Murdoch's "The Sea, The Sea." Iris Murdoch is an incredible novelist, but she is also first and foremost a philosopher and ethicist. I love her protagonists because they are flawed, in particular the protagonist in "The Sea, The Sea", only he doesn't know how flawed and mistaken he is, which of course gives the whole story its element of dramatic irony. 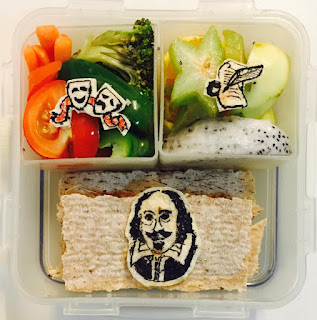 World Book Day Bento #6: And finally, we arrive at the original inspiration for World Book Day... Good ol' Bill Shakespeare. Shakespeare is still considered one of the greatest, most popular and most influential dramatists in history for good reason. His themes of heroism, justice, political intrigue, friendship, loyalty, love, betrayal, prejudice, human fallibility and complex family relationships remain relevant to all generations and across cultures. Shakespeare wrote for the masses, and that is why his plays lack pretension. They weren't moralising or instructive plays, and yet we never fail to learn something from each play. Shakespeare's popularity lies in the fact that his plays are bawdy, ribald, witty, accessible and oh-so-human. So here's to old Will S., one of the greatest philosophers, psychologists, social commentators and writers to have ever lived.
Posted by ~CovertOperations78~ at 19:57