It has been a number of years since I last visited the CETDEM DDC as a workshop participant. The last time I organised a group visit and workshop there was with the Kuala Lumpur Bar Environmental Law Committee in 2006, and after that I participated in their CACCET (Climate Change, Energy Usage and Transport) project in 2006/2007. I don't think I've dropped by the DDC since the time I was engaged to do translation work for some reports they had to submit to the government, although I have attended many of their Hari Organik farmers' market events.

Since Green Living has been on a bit of a field-trip-cum-volunteering roll since last year, I decided it would be a good idea to organise a visit to the CETDEM DDC for those who have never been there but would like to know more about creating or constructing an eco-home in Malaysia.

CETDEM (Centre for Environment, Technology and Development Malaysia) is known for its organic gardening initiatives and periodic Hari Organik farmers' markets in the Klang Valley, but not many members of the public have visited its Demonstration and Documentation Centre (DDC) in SS2, Petaling Jaya.
Formally known as the Demonstration and Documentation Centre for Sustainable Energy Solutions for Urban Households, the DDC was initially set up as a 3-year demonstration, monitoring and result-sharing project on urban household energy efficiency funded by the Danish International Development Agency (DANIDA) for research and education purposes.
And so Green Living organised a visit to the CETDEM DDC for 26 members of the public including MNS members on 22 March 2014. While the powerpoint presentations were a bit too heavy on facts and figures for some of our youngest participants, nevertheless, everyone managed to learn a little more about environmentally-responsible home renovations, household energy audits, climate change and zero-cost and low-cost actions we can take to reduce energy and fuel use. 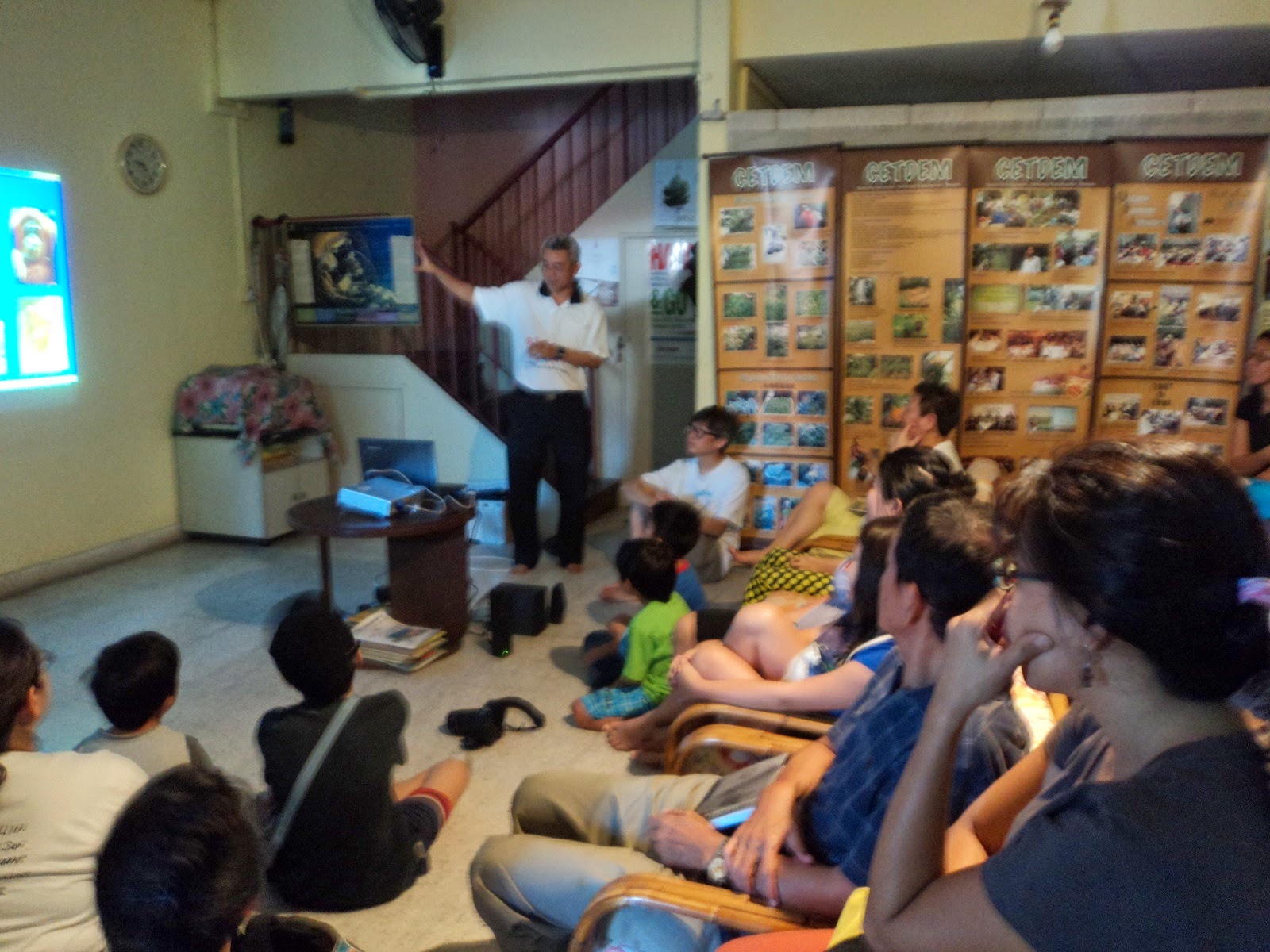 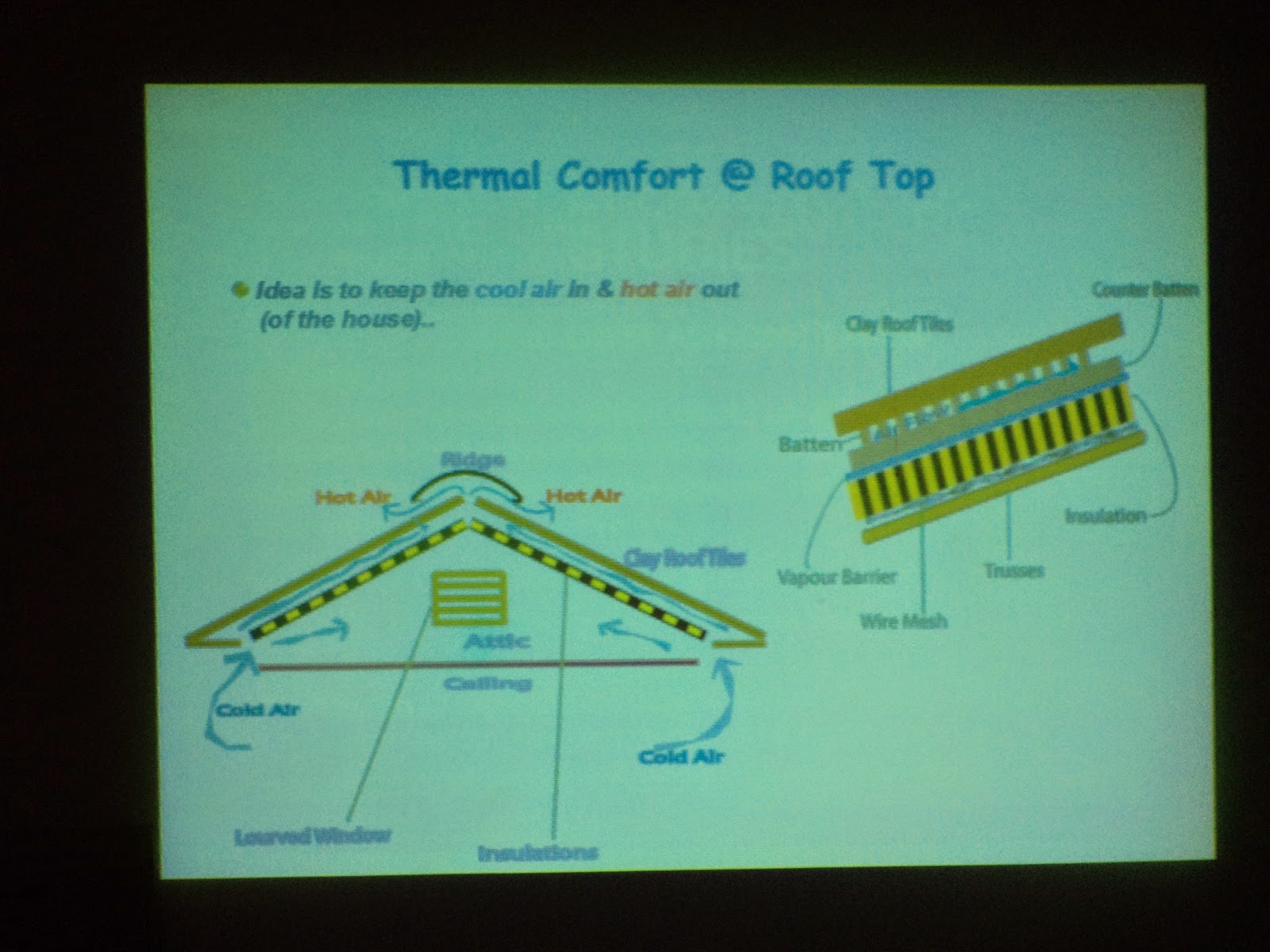 Solar heat is reduced in the CETDEM DDC through the special construction of the roof, which allows hot air to circulate and dissipate. The secret lies in the layering of the clay tiles with rockwool insulation, and  the ridge which lets hot air escape. 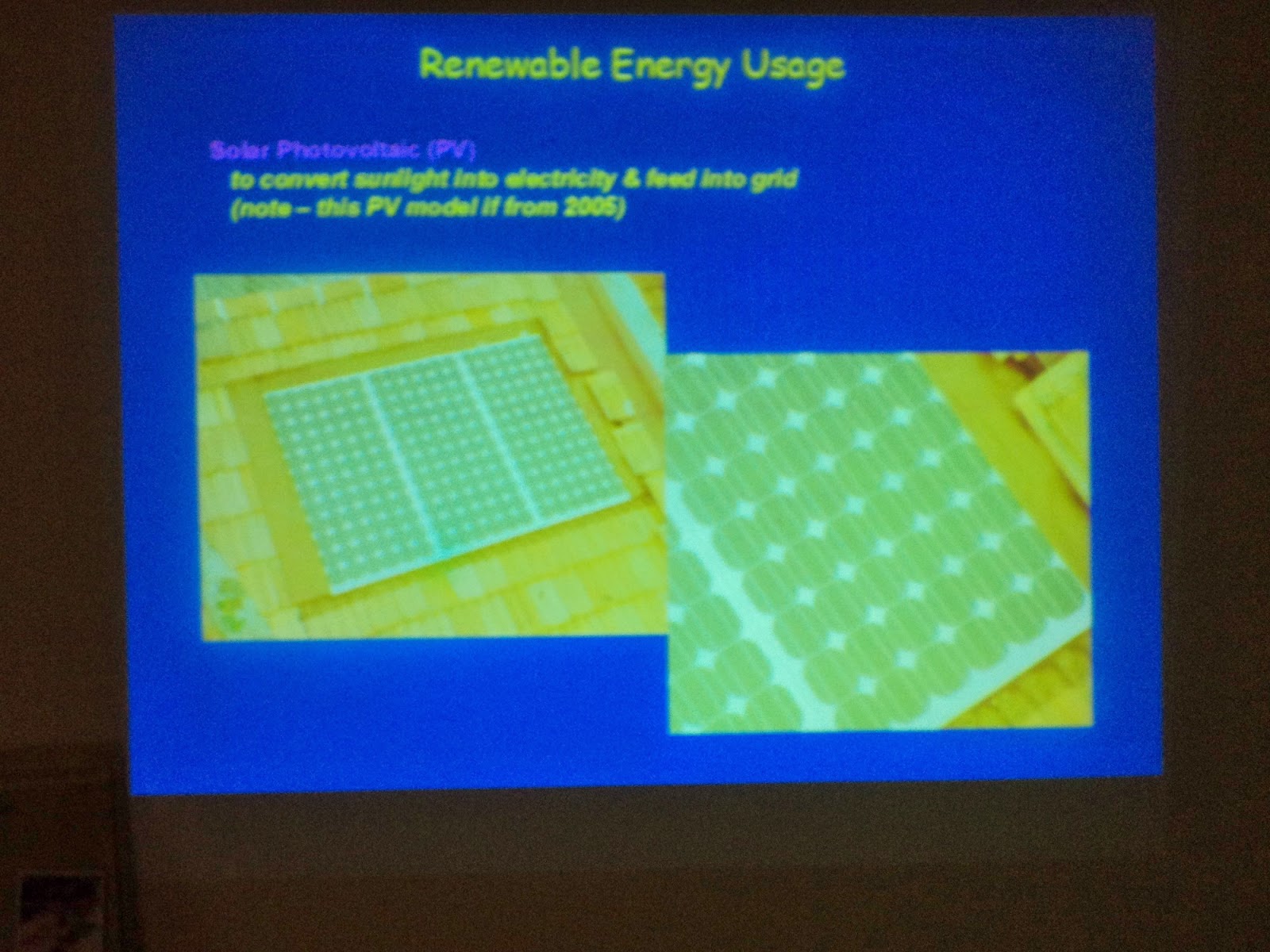 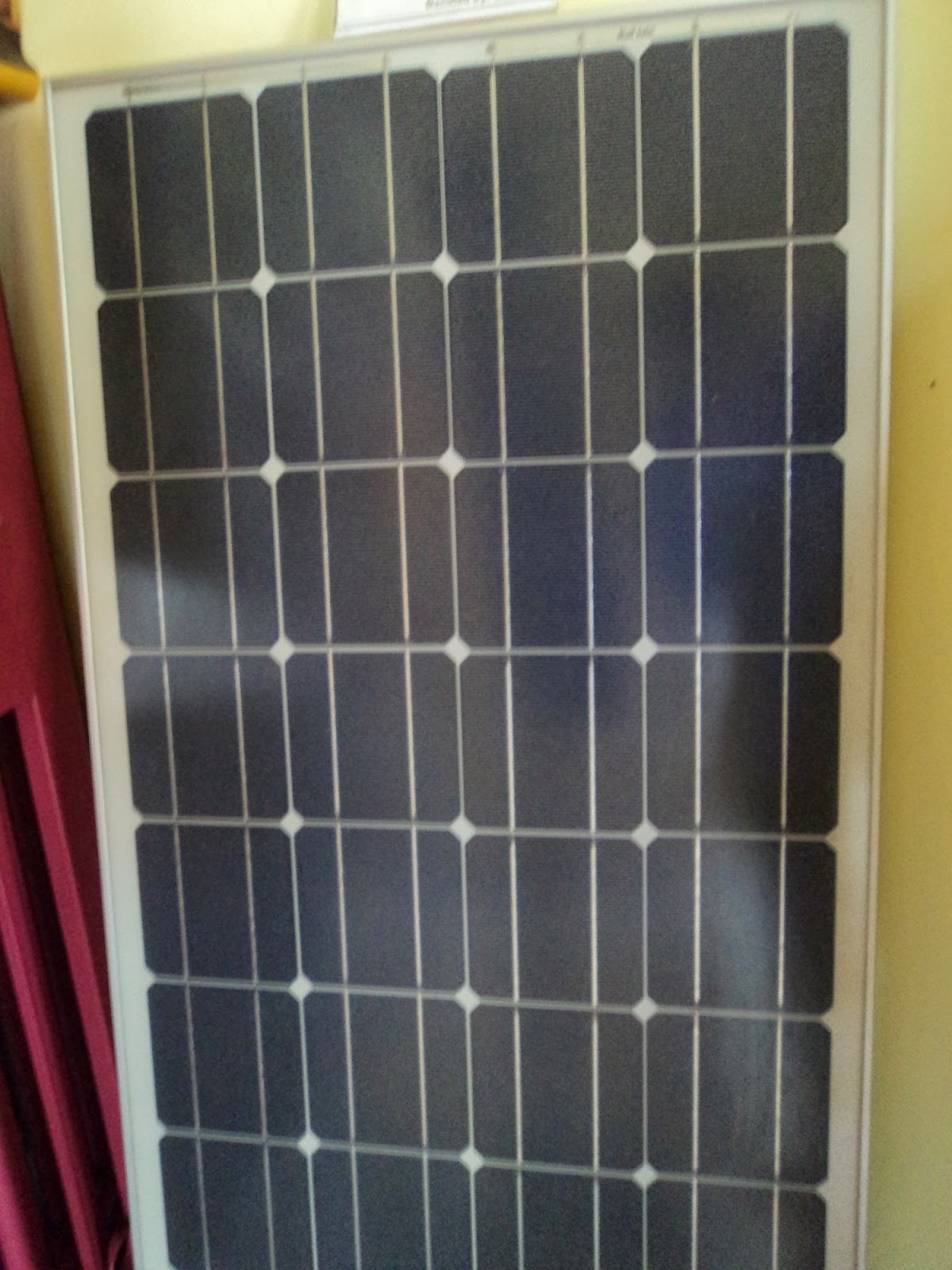 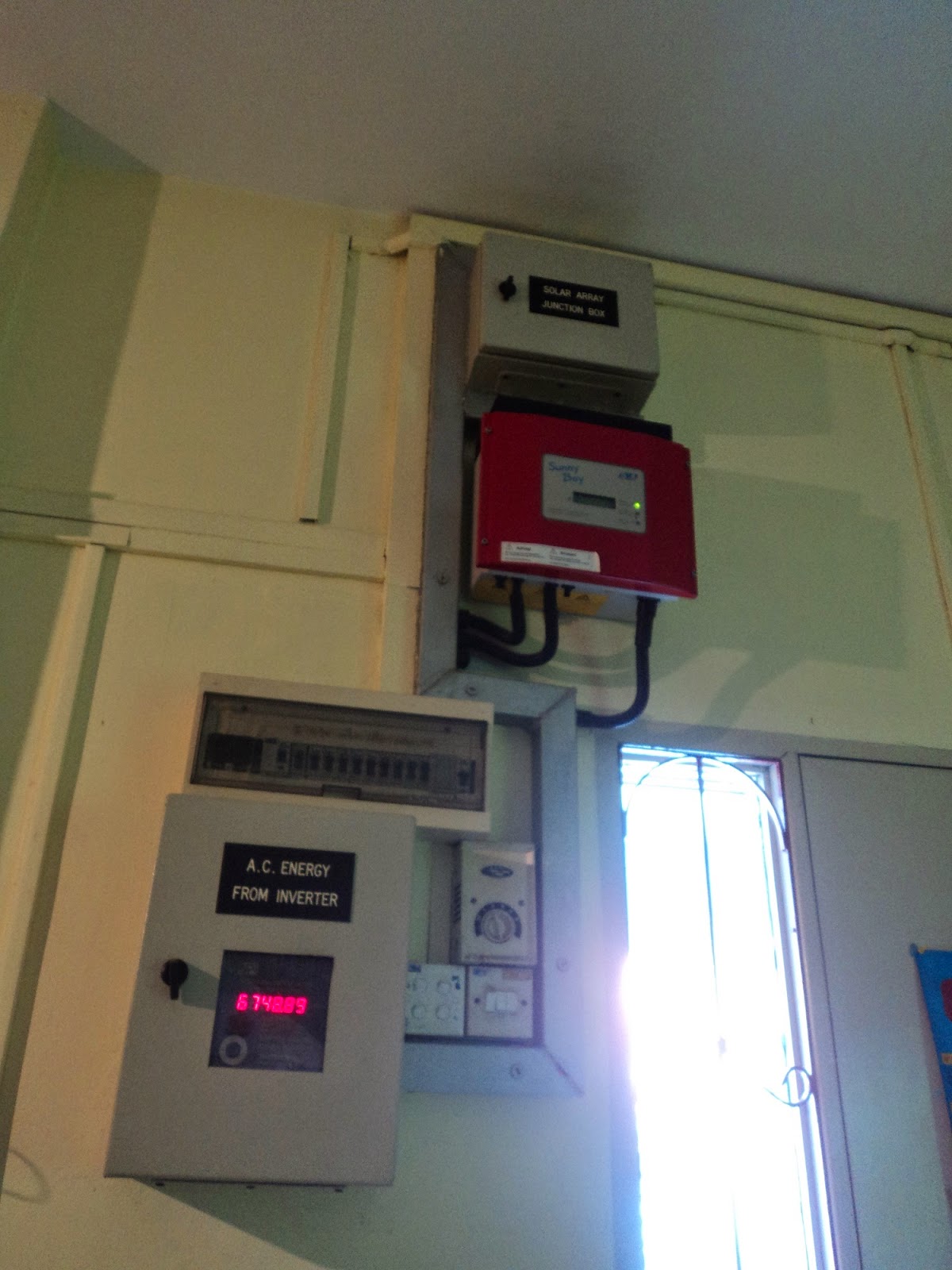 Photovoltaic panels are installed on the roof of the DDC as a source of renewable energy. We were further given a briefing on how the Feed-In Tariff system works. The photovoltaic panels could easily pay themselves off in a year or two this way. 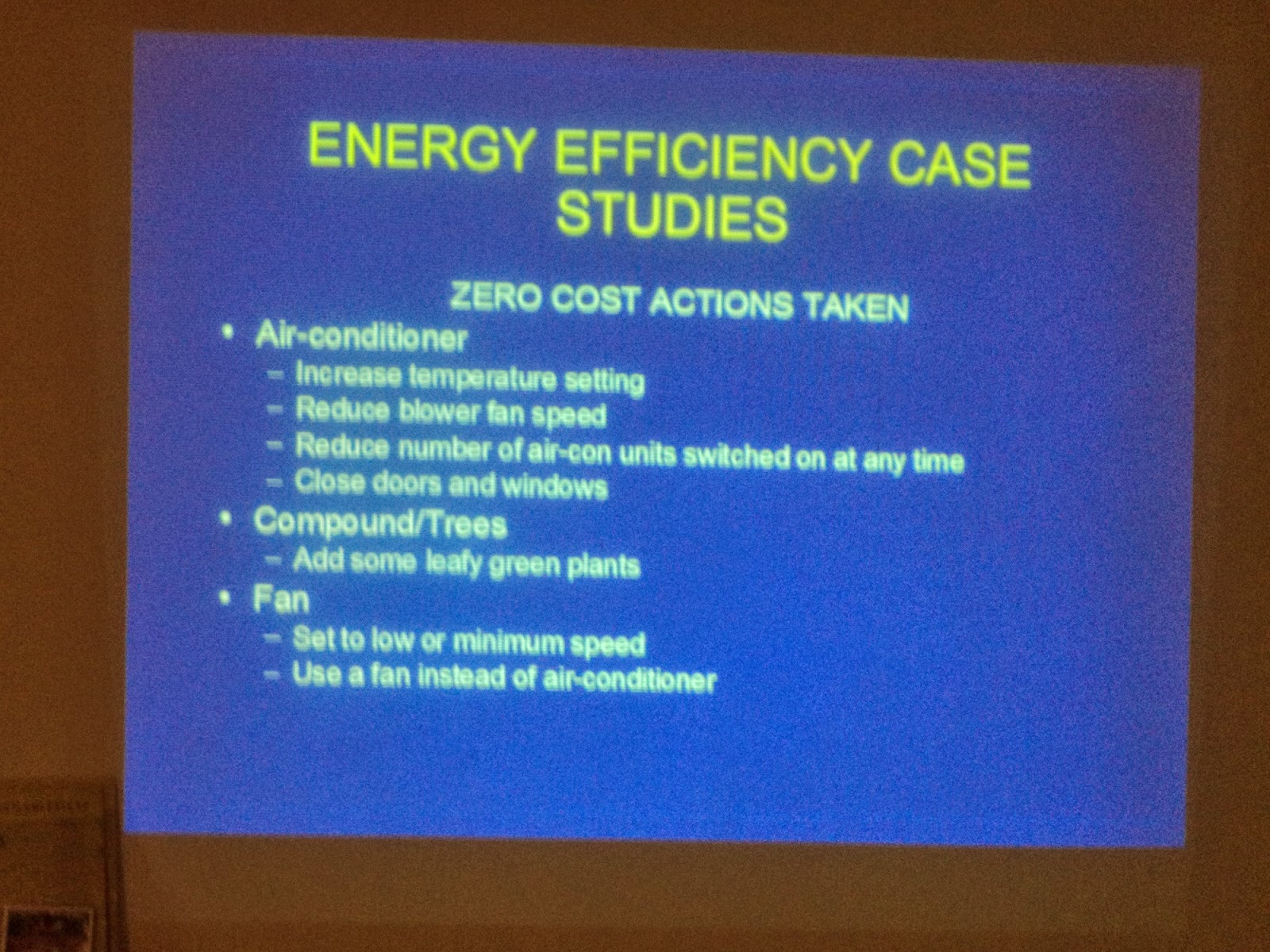 Some of the Zero-Cost Actions we can take to reduce household energy use include the following:
Air-conditioning units:
1. Increase the temperature setting.
2. Reduce blower fan speed.
3. Reduce number of air-cond units switched on at any time.
4. Close doors and windows.
Compound/trees:
1. Add some leafy green plants.
Fan:
1. Set to low or minimum speed.
2. Use a fan instead of an air-conditioner.
Vehicles/Transport:
1. Carpool
2. Plan route well.
3. Switch to, or increase one's use of, public transport.
4. Clean your car's air filters.
5. Reduce your car air-cond use during the rainy season.
6. Walk or bike whenever possible.
Washing Machine:
1. Run on full loads and on less loads a week.
2. Hand-wash similar items.
3. Separate light from heavy materials.
Water Heater:
1. Reduce heating time for central/tank unit.
2. Reduce temperature setting.
3. Reduce usage during the hot season.
4. Shorter showers.
Water Pump:
1. Clean filters more frequently.
Others:
1. Closing doors and windows during the daytime to prevent heat from entering the home. 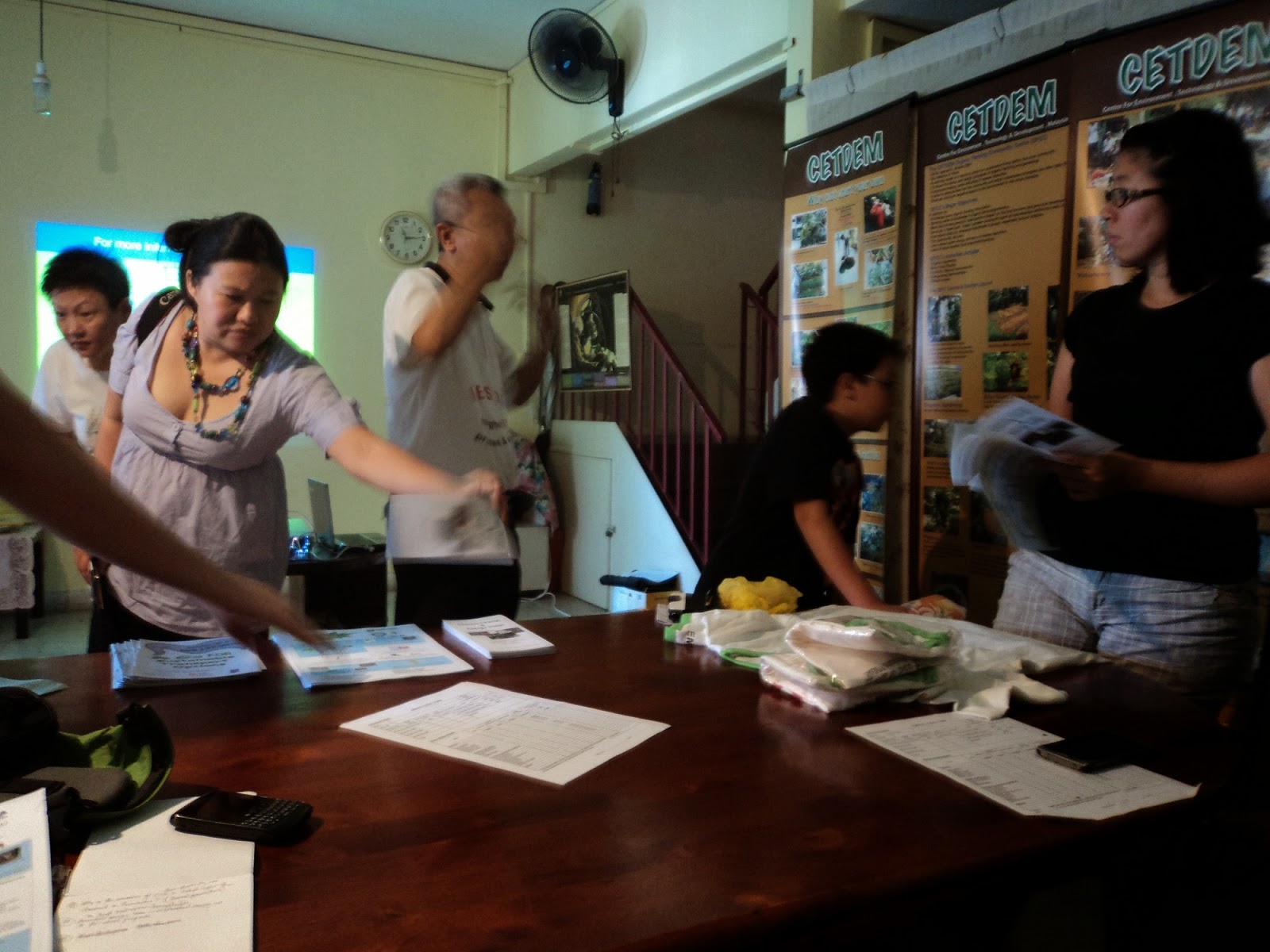 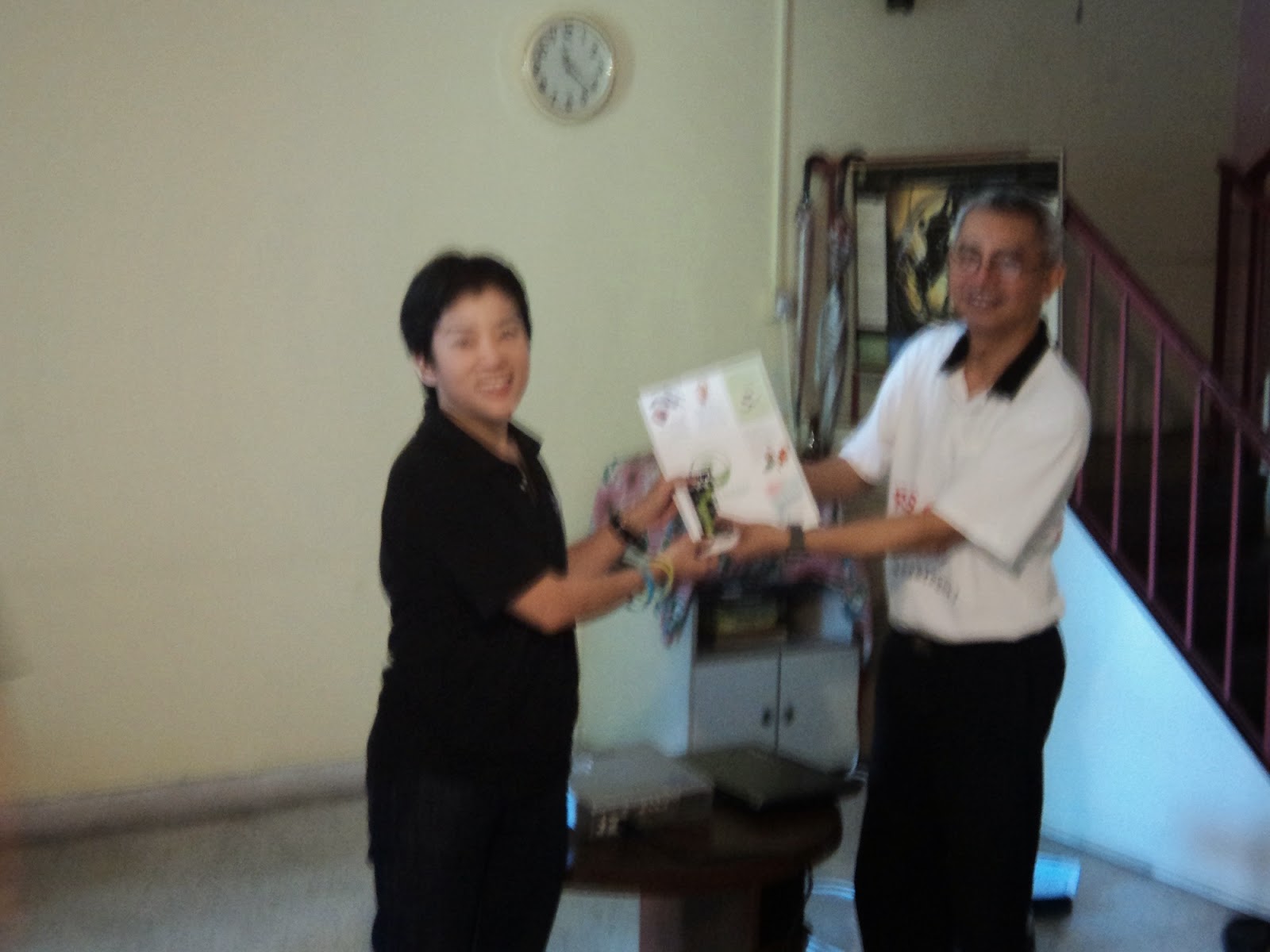 A token of appreciation from Green Living to Anthony Tan, Exec Director of CETDEM, for giving up his Saturday morning to educate and enlighten us.

I gave him a set of the Green Living sticker sheets and one of the booklets, and added a set of biodegradable ballpoint pens from my own collection.

As a side note, Anthony is a really good friend of mine and considers himself my brother. He adopted one of my rescued dogs, Bravo, in 2011. Bravo could not ask for a better home. I am proud to call Anthony my friend. 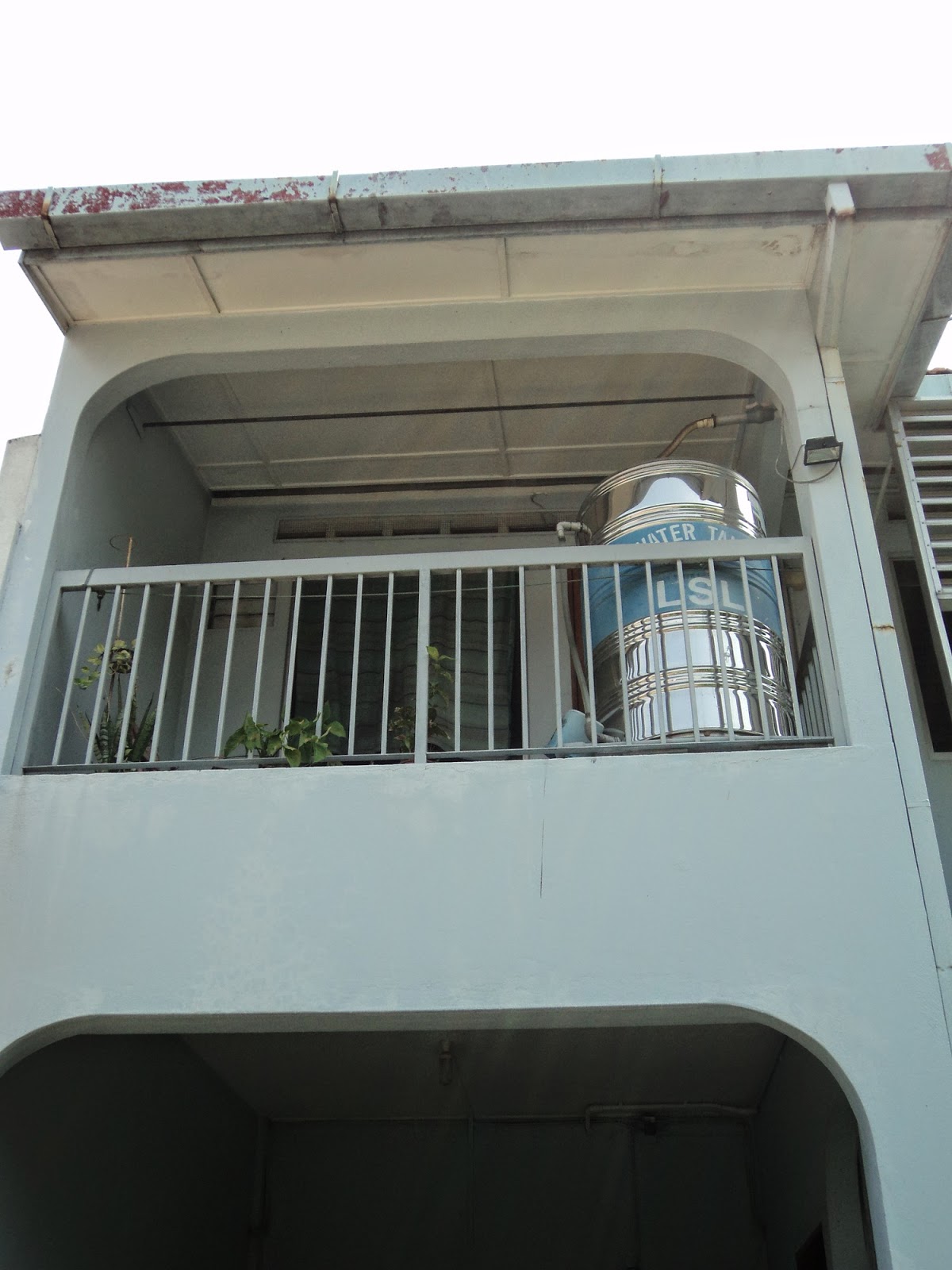 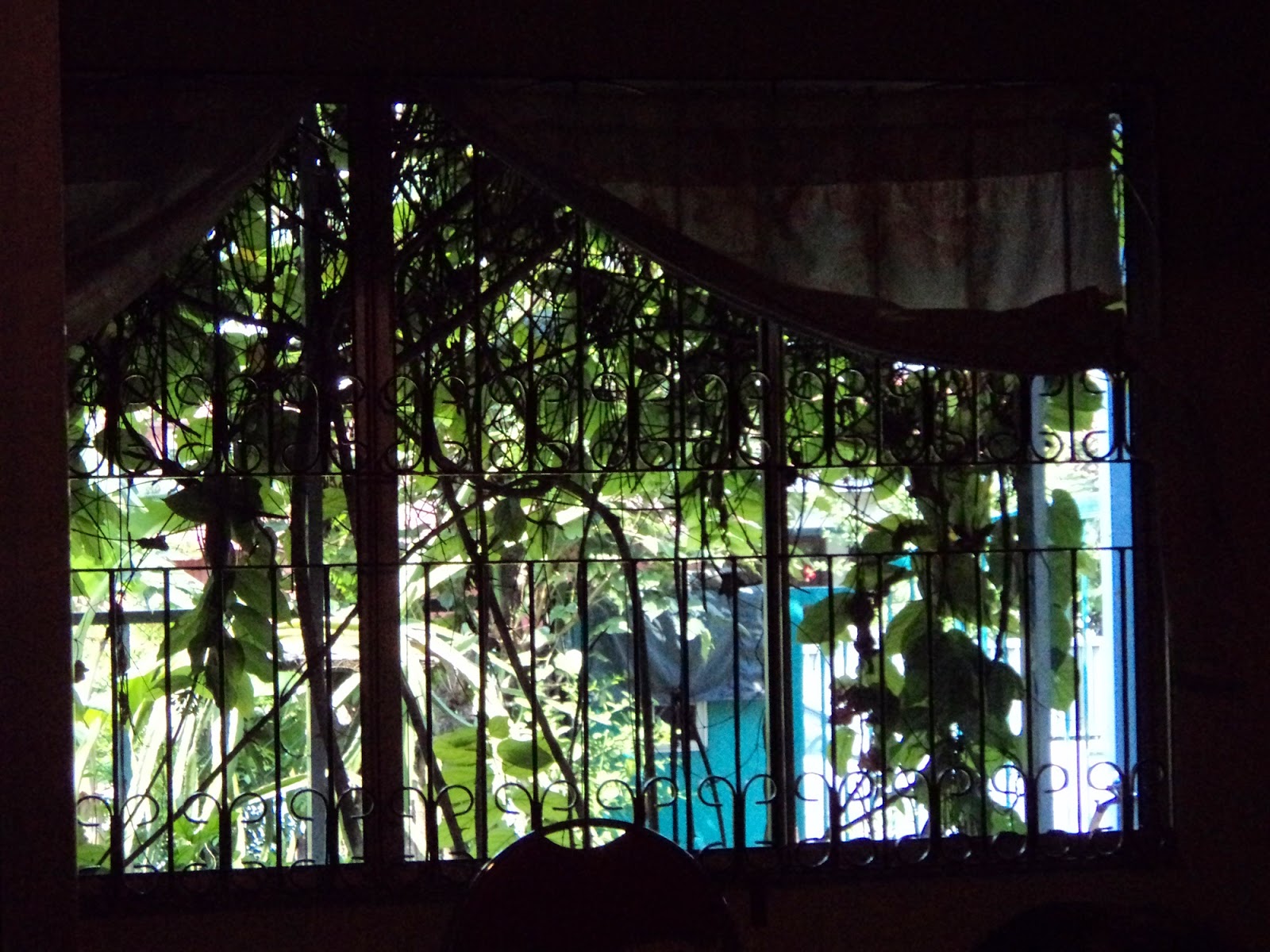 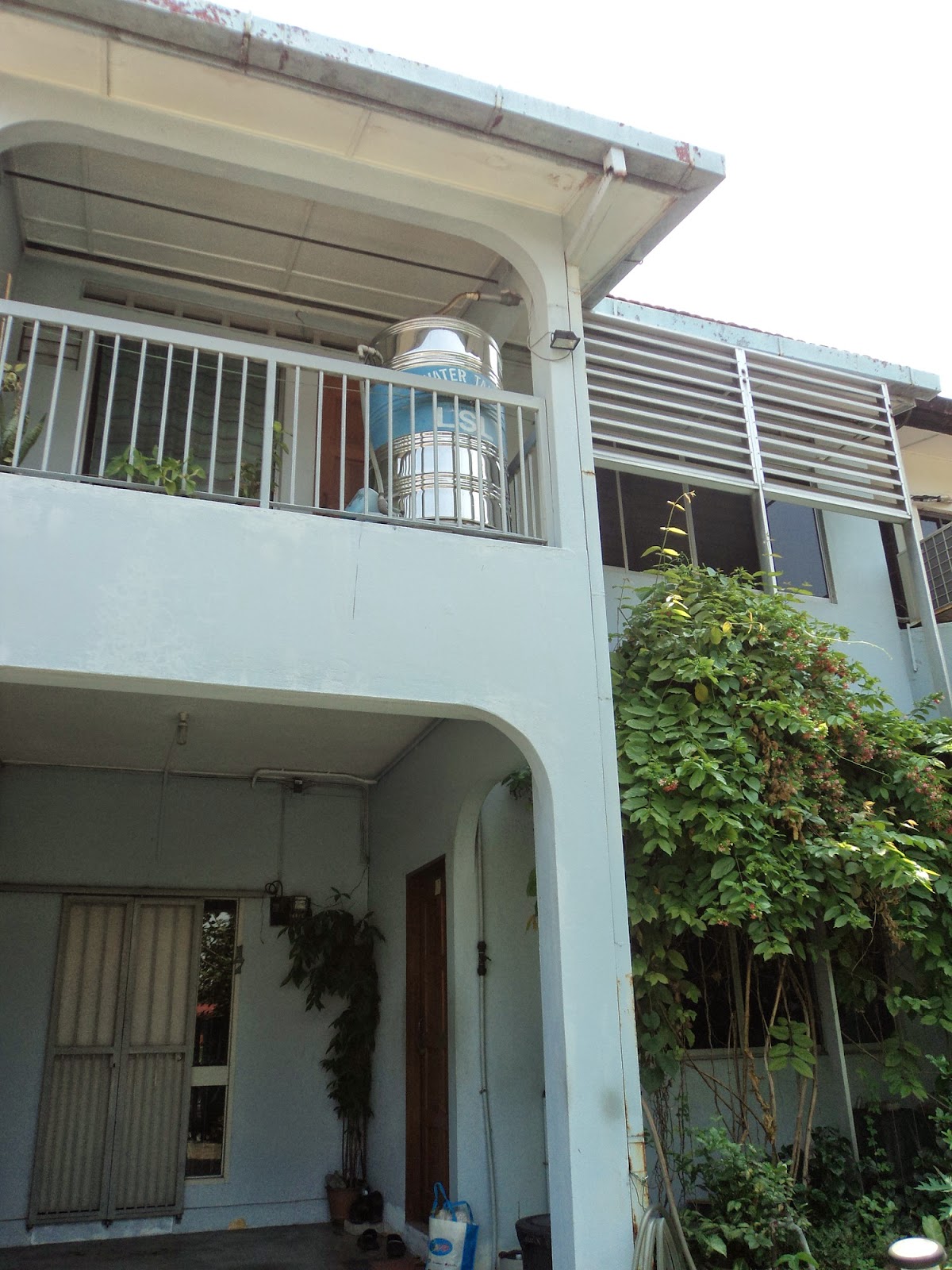 A massive Rangoon Creeper plant climbs up an aluminium trellis and louvres put up outside the windows. The plant and louvres serve as "sun blockers" to prevent daytime solar heat from entering the house.
On behalf of Green Living, I would like to express my utmost appreciation to CETDEM and Anthony for their environmental education efforts in Malaysia.
If you would like to learn more about CETDEM, please visit their official website at http://cetdem.org.my/wordpress/.

DDC visits are arranged upon request only and are usually conducted on Saturday mornings. One week's notice period (minimum) is required. CETDEM also conducts briefings for interested homeowners, building professionals, government agencies and school/university groups. Minimum group size is 5, with 20 being the maximum.