It was during a discussion with a vegetarian delegate representing the Borneo Sunbear Conservation Centre at the Asia for Animals Conference 2010 that I made several startling discoveries about vegetarian food and its lack of popular appeal.

"To encourage my friends to try vegetarian food," revealed my new friend Wai Pak, "I work hard to improve my cooking. All food must be fresh, tasty and attractive. I try to ensure that I serve veggies of 5 different colours."

I had hitherto failed to consider the taste and appearance of vegetarian food as a prime factor in getting others to attempt meatless meals. Being the pedant that I am, I had thought that it was sufficient to inform or remind others about the environmental benefits and animal welfare aspects of eating less meat.

Since that minor epiphany, I have been making a conscious effort to find out what people around me did or did not like about vegetarian food. Many non-vegetarians find vegetarian food to be unhealthy, laden with artificial flavour enhancers, aesthetically unappealing, enigmatic ("What the Hell was THAT black lump I just ate?") and unpalatable.

Where in the Klang Valley, then, can one go out for a healthy, nourishing and appetising vegetarian/vegan food? By blogging about the vegetarian restaurants that I frequent, I hope to be of some small service to potential customers and to the vegetarian food industry.

Vegan Eugene had sang praises about the food at Chayo Cafe in Kelana Mall before, and when my buddy Sheela P. raved on Facebook about how much she enjoyed Chayo's spice tea and Indian set meals, I knew I had to make a date with Chayo.

So on Saturday evening, after our Nature Guiding Workshop, I asked Vegan Eugene to join me for dinner at Chayo. The ambience was welcoming, the establishment was clean and comfortable and the service was commendable. 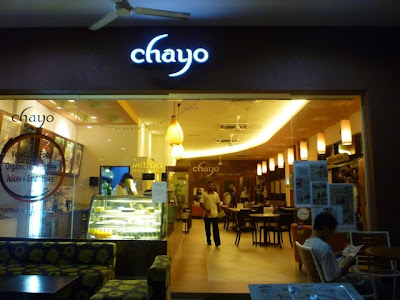 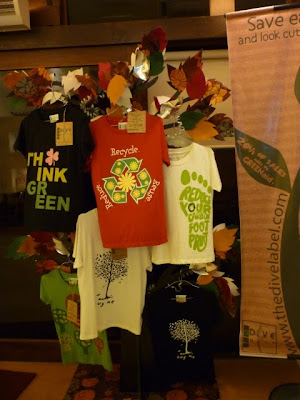 Organic cotton t-shirts with environmental messages would make good gifts for our treehugging friends, while magazines keep patrons occupied while they wait to be served. Service was prompt, however, and the staff were considerate and helpful.

The food and beverage is, of course, the main point of the visit, and we were not disappointed. Vegan Eugene and I both ordered the Indian thali set, which may seem a bit steep at RM9.90 per set, but which we were prepared to make a concession for, as the set comes with Chayo Spice Tea (organic, so I'm told) and the food uses mostly organic and fresh ingredients. What a welcome change it is from MSG-laden chunks of reconstituted soy! 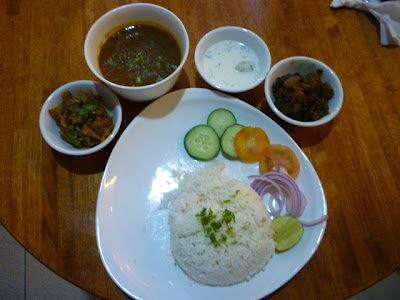 My assessment? The diced pumpkin was delicious and infused with flavour without being overwhelming. Although diced, the consistency was firm, not squashy or starchy. That it was diced made it absorb flavour better and thus prevented the dish from tasting too sweet, as most pumpkin dishes tend to be.

The masala curry was thick with beans and fragrant with spices and made a highly appropriate accompaniment to the rice.

The thairu was delicious too, but shouldn't, in my humble opinion, have the reconstituted soy 'thing' in it. Mint leaves or chopped cucumber and onions would have gone down better with the thairu.

The 'mutton' varuval, like the pumpkin, was finely diced, adding to its flavour and improving its texture and consistency. It was exquisite -- almost crispy, peppery, not excessively salty and blending beautifully with the rice and vegetables.

The green pea masala (not in the picture – it was given to Vegan Eugene to replace the yoghurt dish) had the right balance of natural sweetness and spiciness, and was not runny or squishy as most green pea masalas tend to be. 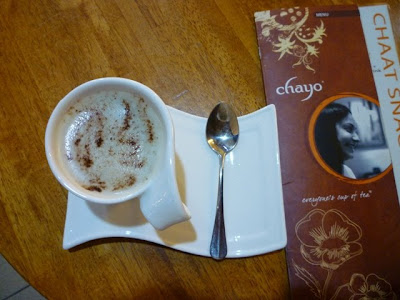 Chayo Spice Tea ~ a soothing blend of tea, spices (we picked up hints of cinnamon, ginger and star anise) and milk. Vegan Eugene forgot to inform them to omit the milk in his, but the astute staff actually picked up on it when he told them he did not want the thairu that came with his meal, and took the initiative to replace dairy with soy milk. It's little thoughtful touches like this that we appreciate.

The official opening hours may be 0900h-2100h, but Vegan Eugene and I continued to be waited on graciously until 2200h.

If there was anything less than satisfactory we found about Chayo, it was that the price was rather high for a vegetarian meal, and the portions were a little small, considering the fact that we could have a huge South Indian banana leaf rice meal with lashings of curry and vegetables for the same price. Also, we hadn’t really expected to be charged 50 sen each for a glass of iced water! For the price they were charging for the food, the iced water should be thrown in for free.

Were we satisfied with the quality of their food and service? I'd like to sum up my first visit to Chayo Cafe this way: If all vegetarian food were this good, the global livestock industry would go bust.

Seeing as how I don't even know where Kelana Mall is, it may be a little bit difficult for me to find this place ;)

But the food sounds good. Indian-vegetarian food usually is. My two weeks in Rishikesh were completely vegetarian (right from the moment I got onto the plane, until I landed in Kayel)and I didn't miss meat at all.

My cooking style is mainly chinese, but the chinese vegetarian stuff I've had has usually been loaded with oil (nvm the MSG), so I've usually felt slightly sick after a meal :(

If there's no meat in the home, Chuan and I go vegetarian without a second thought. But, at heart, I'm a meat-a-tarian lah. Sowwy.

Hurray, you're here, thanks, Pat!

Vegetarianism isn't an all-or-nothing attempt. Even going meatless one day a week helps. My parents are like you and Chuan and I would never ask them to go fully vegetarian unless they want to and are confident that they will be able to get all the nutrients they want.

Indian vegetarian food is normally yummier than Chinese or Western veg meals, which tend to be bland and loaded with starches.

Kelana Mall is on the left of the Kelana Jaya Giant, which is next to the LDP!

We both SO need a Gee-Pea-Ass, Pat! I still won't be able to locate your house if you ask me over again!

Aiyah! No worries about that: I'll come get you from the lrt station lah! Where got problem?!

And during Raptor Watch, you must come visit us in Windsong, k?!

Gee-pea-ass, ah? Google Maps oso I struggle-struggle to read!!! Hahahah! Whafffor I get canggih stuff and dunno how to use wan?!

Windsong -- You're ON! I'll come over when I'm off duty. Maybe we can have dinner together, okies? With the doggirls too.

CO78,
My Mama used to frequent the Annalakhsmi when it was still located in Bangsar. We haven't found any good Indian vegetarian in Sydney but there's one Buddhist vegetarian in Sydney that's good. Eat like a monk, they said. Truth to be told, I'm a fish-ta-rian while my Mama is a fruit-a-rian! teeheehee.... purrr...meow!

Thank you for coming by! It's good of your Mama to eat more vegetarian food. As for you kitties, don't forget that you need taurine to stay healthy, and you can only get that from fish and meat!

Love from my Rowdies.

I've enjoyed more Indian vegetarian than Chinese. Someone,please tell me where to find good Chinese veggie outlets! I prefer to order fish dishes when eating out. That way, I cut down the meat intake.

Hi there, Keats! There are a handful of Chinese vegetarian restaurants in PJ that use organic ingredients and no MSG! They include Ecowoods and Green Meadow in SS2. Restaurants with healthier choices (fewer fried dishes, more soup or steaming based ones) with organic options include Giant Bowl in SS2 and Vegelife in SS26, near my rented pad!

I like vegetarian Food! Dose any one have more tips for me? My email address is gloria_weah@yahoo.com
Thanks!