Nowhere is this generosity more apparent than during the festive season, when senior citizens, underprivileged children and the disabled receive countless gifts and invitations to dinners and parties. Fundraisers held in Kuala Lumpur typically raise far more money than the projected targets. Each time a major newspaper highlights the plight of an underprivileged individual requiring medical treatment, donations start pouring in within the same day. Charity boxes and donation bins in Kuala Lumpur fill up almost as soon as they are fixed in place. 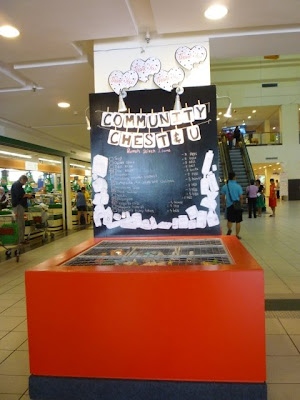 I frequently feel overwhelmed by the love, support and generosity of KL-ites whenever I coordinate any community service project. The same is true of this past month, when I coordinated the Shoebox Project.

The Shoebox Project was initiated by my colleagues who solicited shoeboxes filled with toys, school supplies and treats for refugee children living in Kuala Lumpur. We had 172 beneficiaries on our list, and I decided to get a few friends from my mailing list involved. The response was so immense that I was soon swamped with close to 300 shoeboxes, filled with goodies for underprivileged children, that I had to extend The Shoebox Project to include the following groups of children:
1. Urban disadvantaged schoolchildren living in Setapak, Sentul Dalam and Wangsa Maju;
2. The children of Rumah Nur Salam, Chow Kit; and
3. The orang asli children of Ulu Geroh. 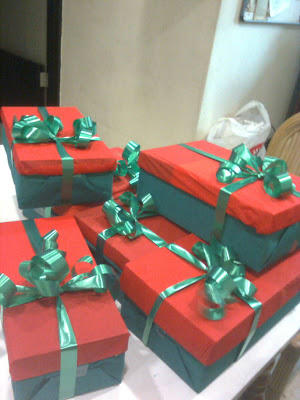 Pretty shoeboxes in festive colours created by my friend Patricia, who got her entire family involved. 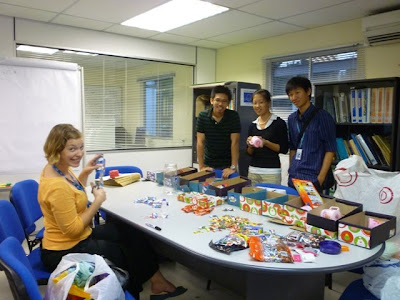 Volunteers of different faiths get together to pack and decorate shoeboxes at their office. 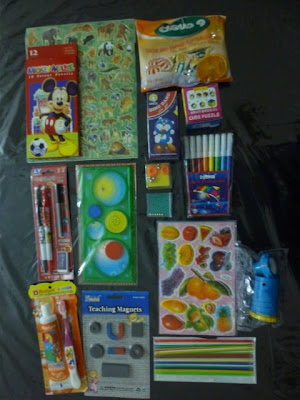 The contents of one of my shoeboxes, prior to packing. I simply had to include the toothbrush and toothpaste, seeing as that I was giving the children sugary treats! 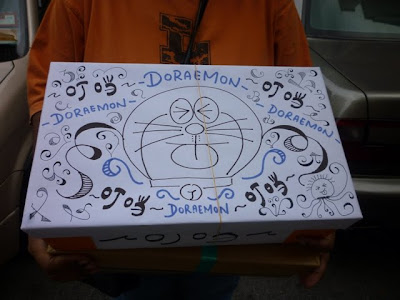 Some of the donors invested a lot of time and care into decorating their boxes. I had recommended that the donors do not wrap their boxes with wrapping paper, as it is wasteful, but to cover and decorate the boxes in such a way as to allow the recipients to open and close the boxes with ease, and reuse the boxes as storage boxes. 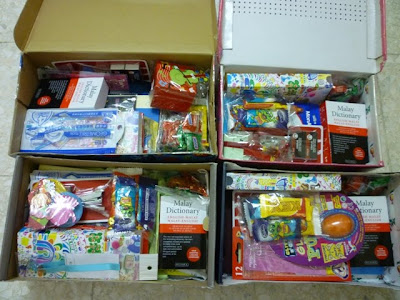 My dear friends Khairul Anuar and his lovely wife Shireen obviously put a lot of thought and care into their shoeboxes, which had a combination of practical, useful, fun and beautiful things. I can imagine the look of delight on the faces of the schoolchildren who will be receiving these beauties!

On December 20, a number of volunteers got together to deliver school supplies, food aid and shoebox gifts to needy families. I trust the children could feel the love and care that went into each box. 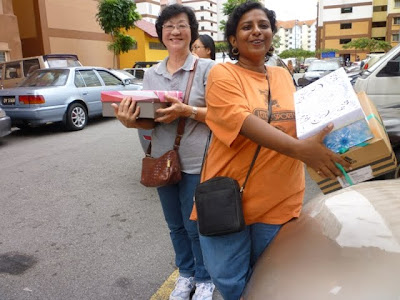 Shoebox Elves at work! My friend Sheela and my mother are all set to deliver the shoebox gifts to children who rarely have anything new to call their own. 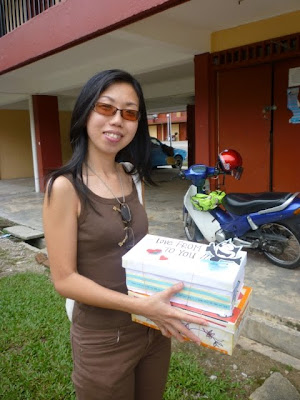 My friend Shet Mei brought cheer to a single mother and her young children with these goodie-filled boxes. 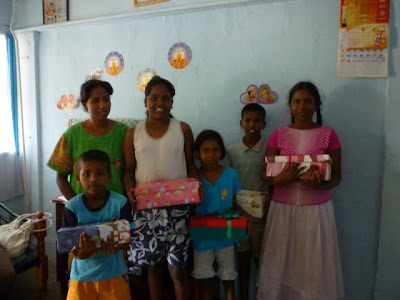 Sumathi, a single mother struggling to make ends meet, expressed her gratitude for the school supplies, food and provisions we brought, while her children were simply thrilled with the unexpected gifts. The younger children were speechless with excitement and could only grin at us. 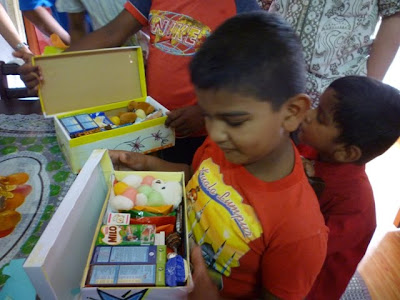 When you are struggling to put food on the table, even items like Milo packets, raisins, fancy school supplies, colour pencils and toys become luxury goods. This little boy was so pleased with his box that he kept opening and shutting it to sneak peeks at the contents, but took nothing out!

To the 200-odd generous KL-ites who contributed their resources, time and energy into creating, filling and delivering these boxes, we thank you! You've made the world a little more beautiful with the cheer you brought!
Posted by ~CovertOperations78~ at 15:58