If I had to describe life in Kuala Lumpur in just one word, I would choose 'abundant'.

"You've got to be kidding," I hear other city-dwellers huff dismissively, as they rant about the rising costs of fuel, highway use, consumer goods and property. I prefer to notice, instead, the portions of food left uneaten at restaurants and stalls, the long queues at department stores and hypermarket counters and the line of eager moviegoers at cinemas.

We are blessed with so much that we sometimes don't make a conscious effort to remember how fortunate we are. Just as a fish would not have a word in its vocabulary for water, most urban professionals in Kuala Lumpur are accustomed to having so much that they forget that they actually lack nothing.

Kuala Lumpur is lucky, too, to be home to a vast number of thoughtful and generous individuals and groups. Numerous charitable bodies operate in the City to alleviate the suffering of those who are less fortunate. Children living in welfare homes and orphanages are so well-provided for that they get dozens of gifts each festive season. When my ex-manager called me up recently to request my assistance in identifying needy children's charities in KL, I had a hard time identifying even one that was truly in want.

There are, however, pockets of impoverished communities living amongst us in KL. Many are so poor that their children drop out of school at a young age. Others are victims of domestic violence, disease or illness.

This is where individuals like my friend Bernie comes in. Bernie has spent years identifying, checking on and assisting hardcore poor families in Setapak, Sentul Dalam, Wangsa Maju and Sri Rampai, near her home in Setapak. 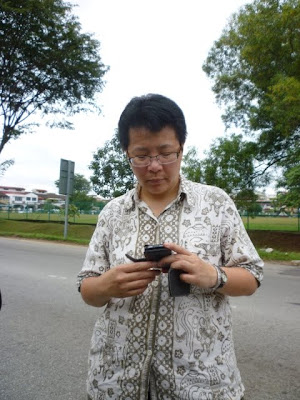 Bernie's outreach work has the noble objective of helping the poor, especially single mothers, be self-sufficient, and of providing education assistance and opportunities to needy schoolchildren. 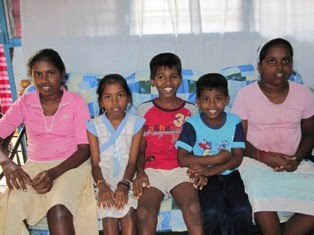 Sumathi has 6 children, an abusive husband and no means of financial independence. Bernie and her volunteers bought Sumathi a blender and taught her cooking and business skills. As a result, Sumathi is now able to sell nasi lemak, even if only in small quantities, and that has helped her feed and clothe her children. 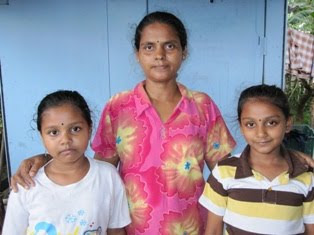 Kanniamah is a widow with 2 young daughters and strives to be independent by selling thosai outside her house. They rent a room in Setapak and make hardly enough to pay the rent and bills. 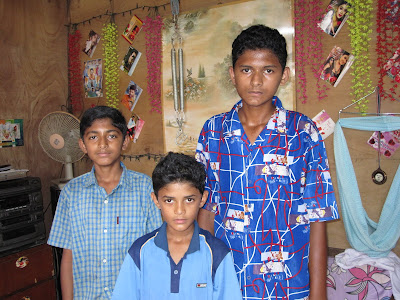 Inthra Devi, her husband, 3 sons and a daughter live in this shack that they built themselves in Wangsa Maju. Her husband does odd jobs, as does her 13-year-old son during the school holidays.

For the past 3 years, I have been assisting Bernie in coordinating the collection, purchase and distribution of school supplies and other aid to the needy families. I am frequently overwhelmed by the magnanimity of Malaysians and their trust in us. I have been informed that many Malaysians want to be able to help, but they just need to know that their contributions are being given to the intended beneficiaries directly without the interference of middlemen and organisations with their retinue of staff.

On 20th December, my group of friends and I, led by the inimitable Bernie, visited a number of homes to deliver food items, school supplies, provisions and shoeboxes filled with goodies. 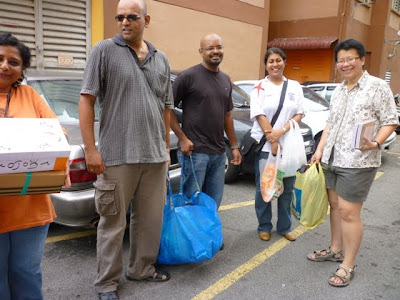 The volunteers getting ready to haul the goodies up 13 flight of stairs to bring cheer to a single mother with serious health issues and her schoolgoing children. 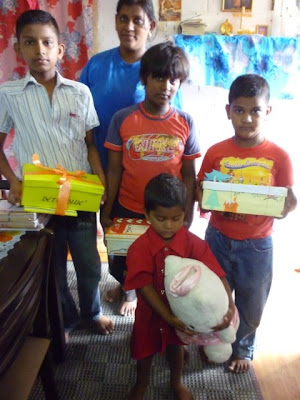 The children were a little awkward and shy during the photo session, but their mother cried and hugged us for the school supplies and provisions we brought to help them through the leaner months. 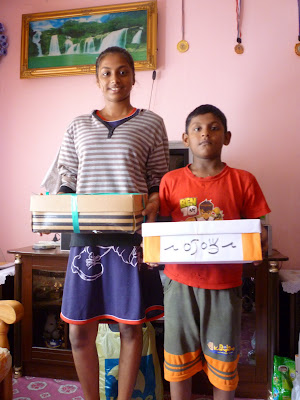 These siblings lost their father recently and were very glad of the assistance we provided for school. The low-cost flat unit in which they reside is made comfortable thanks to well-wishers who donated secondhand furniture and electrical appliances. 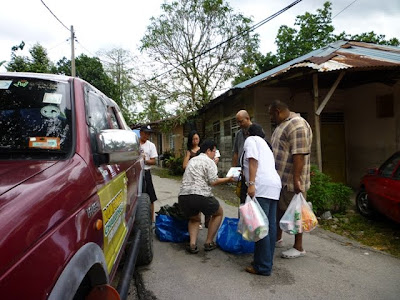 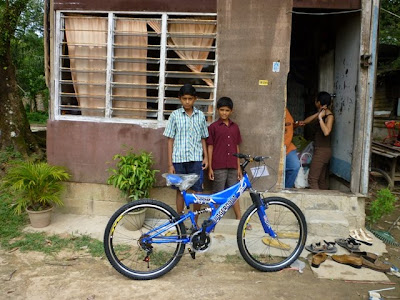 Tharuvin and Ravi Kumar tried to look macho for this shot, but broke into wide grins as soon as I finished taking their photo. What young man wouldn't be pleased with such a splendid-looking new bicycle? When our friends heard how the 3 brothers had only one old bicycle between them, and how they had to take turns running and riding the bike to school, they decided to pitch in and get the boys a new bicycle so they could get to school on time. 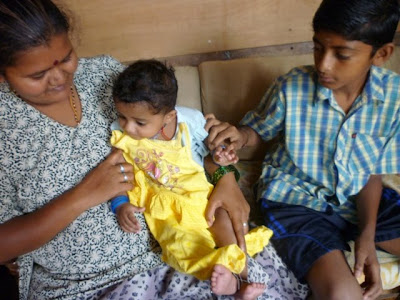 The new clothes are a little too big for Tharshini, but she will grow into them! Her mother expressed thanks for the provisions we brought, especially the baby formula.


Why do we do what we do? I believe it is because we have embodied the essence of 1Malaysia long before the Prime Minister gave it a name. To volunteers and donors like Bernie and the rest of our friends, 1Malaysia isn't about dressing children up in traditional costumes for a National Day photo opportunity. 1Malaysia isn't about the self-conscious attempt to 'tolerate' and 'understand' people of different faiths and cultures.

To us, 1Malaysia means looking out for each other and offering assistance to all communities, with no strings attached, in order that the nation becomes strong. It means extending our circle of compassion to others regardless of religion, ethnicity, political persuasion, gender and background.

To donors, 1Malaysia means recognising that distributive injustice and inequality exists everywhere in the world. It means embracing our roles as agents of social change by making the gap between the entitled and those who lack opportunity a little smaller. It means understanding that poverty does exist, often due to circumstances such as illness and bereavement of a spouse, and that no one is to blame for it, but that we have a shared duty to assist those who are more in need than we are.

To volunteers, 1Malaysia means realising that a single act of compassion is worth far more than ten volumes of vitriolic criticisms and complaints, and more than the mere paying of lip service to the ideals of harmony and unity. It means acting on the aforementioned realisation and on our shared values of justice, kindness and service to mankind and the living world. It means becoming the difference we want to see.

1Malaysia to us isn't found in songs and PR campaigns, but in the sincerity with which we demonstrate care and concern for the well-being of others, and our ability to empathise with others and their predicament. 1Malaysia isn't to be found in local delicacies, or only during the festive season, but in our daily lives when we share our meals, work together towards common goals, turn to each other for advice and support, spend the night in each other's homes when a volunteer project stretches late into the night, address each other as "brother" or "sister", or have the spare keys to each other's homes in order to attend to pets and potted plants.

For we are so much more than just caricatures of our ethnicities, with traditional costumes and idiosyncratic accents to identify us as being of a particular racial heritage. We are so much more, so much better and so much more resilient than the definitions and limitations that the politicians have encumbered us with.

I share their vision and I will be part of the mechanism to make it come true. I know that my fellow Malaysians and I will work together to bring inclusiveness, progress, justice and economic, political and environmental stability to this country.

And I know I am not alone in striving towards this goal.


Link to this post: Letter to the Editor: Capping of Additional School Fees A Welcome Proposal.
Posted by ~CovertOperations78~ at 16:01